A Brief History of the UCSB Natural History Collections

CCBER was formed in 2005 from a fusion of the Museum of Systematics and Ecology (MSE) and the ecological restoration program. Founded by the former Director, Wayne Ferren, the restoration program emerged from MSE's involvement in the study, preservation, and restoration of threatened wetland habitats in the vicinity of campus. The founders of the Herbarium and the Vertebrate Collections, Drs. C.H. Muller and Mary Erickson, respectively, and subsequent contributors to the botanical and zoological collections represent some of last century's leaders in ecology, behavior, plant structure, and the development of modern systematics. For over 60 years these valuable collections have contributed to the research and educational missions of the University.

Dr. Cornelius H. Muller founded the vascular plant collection at UCSB in 1945 to provide support for plant taxonomy and ecology courses that he taught. By 1948, a small working collection had been accumulated and housed in a herbarium case in Dr. Muller's office. In 1956, Dr. Muller was officially appointed curator of the herbarium and he served in that position until 1966.

The vascular plant herbarium houses approximately 90,000 sheets with a strong emphasis on local and ecologically sensitive plant communities. The collection includes materials from highly sensitive coastal wetland habitats in central and southern California, including both coasts of Baja California. The former herbarium director, Wayne Ferren, was an expert in salt marsh plants and collected extensively. Also, because of his expertise and interest in the conservation and restoration of vernal pools, there is a valuable collection of vernal pool material. The large scale destruction and degradation of vernal pools in California makes them one of the most threatened habitats in the state. As a result, our collections are an important resource for understanding the historic distribution and diversity of extinct vernal pools, for restoring surviving vernal pools, and for constructing new vernal pool communities. In parallel with our vertebrate collections, our herbarium contains material from the California transverse mountain ranges and the Carrizo Plain, both climatically and biogeographically unique regions with high endemism. The collection also includes specimens from elsewhere in the United States, southern Africa, New Zealand, and Australia.

Dr. Cornelius H. Muller was also widely recognized as a world authority on the ecology of oaks. His career spanned much of the history of plant ecology in the United States. His collection, species descriptions, and research made him the leading authority on the genus Quercus. He also named a number of new species, largely oaks.

Muller collected over 15,000 oak specimens from western North America during his lifetime. He assembled two primary sets of specimens --one is in CCBER's Herbarium and the other set is at the L.H. Bailey Hortorium Herbarium at Cornell University. CCBER also has over 90 sheets of his type specimens that can be viewed online at JSTOR Global Plants Initiative (http://plants.jstor.org/).

In addition to actual type material, Muller was thorough about re-collecting type localities, so many of his specimens are typotypes. He also received material for determination from prominent collectors from 1940-1970. Thus, the Muller Oak Collection is an important resource for researchers interested in the systematics of southwestern oaks.

The John Robert Haller Pine Collection comprises about 5,000 specimens collected by Dr. Haller during his 60 years of research on pines from western North America. The specimens are from more than 300 different localities spanning a broad range of ecoregions from British Columbia to Central America. Each collection location includes five to sixty or more specimens exhibiting population variability, including cones, immature, and/or mature branches exhibiting diagnostic features. Variation in Pinus ponderosa, Pinus jefferyi, Pinus washoensis, and Pinus torreyana are all documented in the collection. In some cases, the original collecting site was visited numerous times through subsequent decades for additional study. Associated with each collection are extensive hand-written notes and data, including more than a dozen taxonomic metrics per specimen that vary from individual to individual and by locale. Environmental characteristics of each site are also recorded and geographic reference data for many collection sites have been recently determined utilizing a combination of detailed mileage logs, topographic maps, satellite imagery, and the invaluable recollections of Dr. Haller. 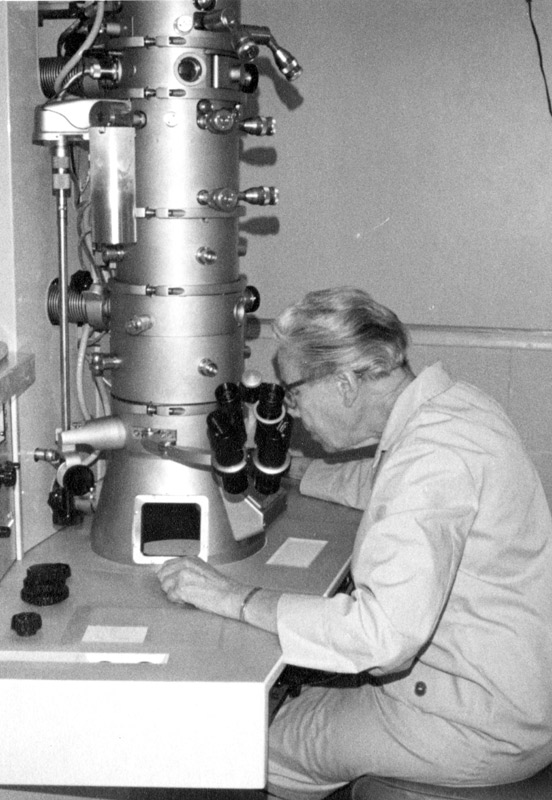 The collections of Vernon I. Cheadle and Katherine Esau span 60 years of botanical research. Dr. Cheadle's research interests focused on tracheary cells, the water conducting cells, in higher plants. Dr. Cheadle also served as Chancellor of UCSB from 1962-1977. Dr. Esau's successful and prominent career in botany included studies on developmental and pathological plant anatomy and on the ultrastructure of phloem, the food conducting cells in higher plants. She is best known for her beautifully written and classic textbooks on plant anatomy.

Over 5,000 bottles of fluid-preserved plant specimens including monocotyledons, dicotyledons, and a smaller number of conifers and ferns collected in Cuba, Australia, New Zealand, Africa, and the United States comprise the majority of the collection. Approximately 64,000 microscope slides prepared from these specimens complement and support the preserved collection. Field collection information including photographs, herbarium voucher sheets, tracheary cell measurements, and general anatomical information is contained in the extensive data card files.

Supplementary anatomy collections include a phloem slide collection and supporting data consisting of over 1,100 slides jointly prepared by Cheadle and Esau. This collection of beautifully prepared and stained microscope slides represents research conducted at UC Davis during 1950 and 1951 by Cheadle and Esau on the secondary phloem of dicotyledons. Collection information including locality, age of stem samples, preparation procedures, and specific section information are included in data card files. This collection consists of 119 families, representing 342 genera.

The Algal Herbarium contains approximately 8,000 specimens starting with the collection by Charles L. Anderson and collaborators (1873-1889), which serves as the basis of the first published list of algae of California (Anderson 1891, 1893). The earliest specimens from the Santa Barbara region, collected by Lorenzo Yates (1902) and Donald Peattie in the 1930s and 1940s, are also part of the algal collection.

The phycological collection is an important resource for marine biodiversity and biogeography studies of the Pacific Rim region. The collections provide an excellent 125-year record of the marine flora of the Santa Barbara region and Channel Islands, and include a special collection from Santa Cruz Island. The specimens and collection information are of particular importance because of the adjacency of this region to Point Conception, California, a major biogeographic boundary.

The collection also includes three exsiccatae collections (Lindauer from New Zealand, Areschoug from Scandinavia (in part) and Scagel from British Columbia (in part)). Over 1,000 reprints on marine algae and ecology and an extensive worldwide collection of algal floras are also part of the collection.

The Albert L. Brigger and Robert W. Holmes Diatom Collection consists of diatom specimens, slides, photographs, and approximately 300 volumes from Brigger's personal library and from the extensive research collections of Holmes.  A small collection of Brigger's papers is housed at CCBER. The Holmes collection contains approximately 5,000 slides, 700 samples and cleaned material, and 500 light and scanning electron microscope images. Holmes' main research interests were the description of diatoms from cetaceans, the diatoms on diving seabirds, and the use of diatoms as a tool for reconstructing the pH of Sierra Nevada lakes. Holmes also studied the variability of the genus Cocconeis and the Aulacodiscus kittonii group. In addition, he sampled diatoms throughout the world in freshwater and marine habitats. His papers are also housed at CCBER.

The lichen collection is housed in Herbarium I, together with the vascular plant collections. It is a modest collection with about 700 identified specimens representing about 500 species, donated by Dr. Shirley Tucker and others. In addition, Amanda Heinrich, Philip Persons, and a lichen curatorial internship taught in 2011 initiated an additional collection of lichens from the Sedgwick Reserve that will be housed with the other specimens in the herbarium.

CCBER's lichen collection contains specimens commonly encountered in the Santa Barbara area, including the University campus (22 species), Santa Barbara, the Channel Islands, and Santa Ynez. Additional specimens from other parts of California, other states, and overseas add diversity in the form of taxa not represented in the local collection.

Dr. Mary Erickson, who joined the faculty at Santa Barbara State College in 1939, founded the vertebrate collections in 1962 to provide support for the zoology courses she and other faculty taught. Dr. Erickson was instrumental in transforming the school into a University of California campus. Her close colleague and contemporary, Dr. Barbara DeWolfe, contributed large numbers of specimens to the avian collection in its early years and continued to be a benefactor of the collections to the present day. Upon joining the UCSB faculty in 1972, Dr. Stephen Rothstein gave high priority to the maintenance and enhancement of the vertebrate and especially the avian collections. Mark Holmgren became Collection Manager in 1983 and he and Dr. Rothstein contributed many specimens to the avian collections during the last three decades.

The collection contains approximately 9,400 study skins and skeletons. There is good representation of species found in Southern California, including the near ocean and the Channel Islands, and also many species found elsewhere in North America, Mexico, and Europe. Special efforts have been made to collect species of particular biogeographic interest in southern California, such as those that have subspecies boundaries within the region. In addition, the collection has especially large series of several species that have figured prominently in the literature on ornithology, evolution, behavior and physiology, such as the White-crowned Sparrow, Brown-headed Cowbird, Grebe, Acorn Woodpecker, Wrentit, Savannah Sparrow, and Spotted Towhee. The collection also houses specimens that have contributed to numerous studies published by UCSB researchers.

The mammalogy collection consists of about 3,500 specimens, most of which are study skins and skulls. The collection also includes partial or complete skeletons for many species. The skins of large animals have generally been prepared as tanned hides (flat skins).

The mammal collection is regionally focused with strong representation from the Point Conception biogeographic boundary region and the transverse mountain areas.

Dr. Sam Sweet founded the herpetology collection in 1977. His personal collections were the nucleus for a synoptic collection that now covers family-level diversity worldwide. Numerous field collections by Dr. Sweet and his students provide the most comprehensive existing database on reptiles and amphibians in southwestern California.

The herpetology collection holds approximately 18,500 specimens, mostly from San Luis Obispo, Kern, Santa Barbara, Ventura, and Los Angeles counties. The collection is scientifically valuable for its extensive coverage of this rich and biogeographically complex transitional region. The majority of specimens are fluid-preserved and are accompanied by field notes. There are significant holdings of amphibian eggs and larvae, and skeletal preparations.

The CCBER herpetological collection is unique in its thorough coverage of the herpetofauna of Southwestern California, and for its relevance to critical conservation issues via documenting life history patterns of declining amphibians and recent changes in the abundance and distribution of species.

The Adrian Wenner Invertebrate Zoology Collection represents an uncommon historical record of insects in endangered coastal California habitats. Wenner taught the UCSB general entomology course from 1961 until he retired in 1993. The collection was a teaching collection for that course, focused on regional insect diversity, and commonly collecting from UCSB and the UCSB Natural Reserve System habitats. The collection is diverse for an insect collection of its size, containing over 9,000 insects in 21 orders and 246 families. In 2015, the collection was discovered in a building on campus. It was in remarkably good shape and it was moved to CCBER for curation and care.