What is a Transmission Electron Microscope?

Transmission electron microscopes (TEM) are microscopes that use a particle beam of electrons to visualize specimens and generate a highly-magnified image. TEMs can magnify objects up to 2 million times. In order to get a better idea of just how small that is, think of how small a cell is. It is no wonder TEMs have become so valuable within the biological and medical fields.

How Do TEMs Work?

TEMs employ a high voltage electron beam in order to create an image. An electron gun at the top of a TEM emits electrons that travel through the microscope’s vacuum tube. Rather than having a glass lens focusing the light (as in the case of light microscopes), the TEM employs an electromagnetic lens which focuses the electrons into a very fine beam. This beam then passes through the specimen, which is very thin, and the electrons either scatter or hit a fluorescent screen at the bottom of the microscope. An image of the specimen with its assorted parts shown in different shades according to its density appears on the screen. This image can be then studied directly within the TEM or photographed.  Figure 1 shows a diagram of a TEM and its basic parts. 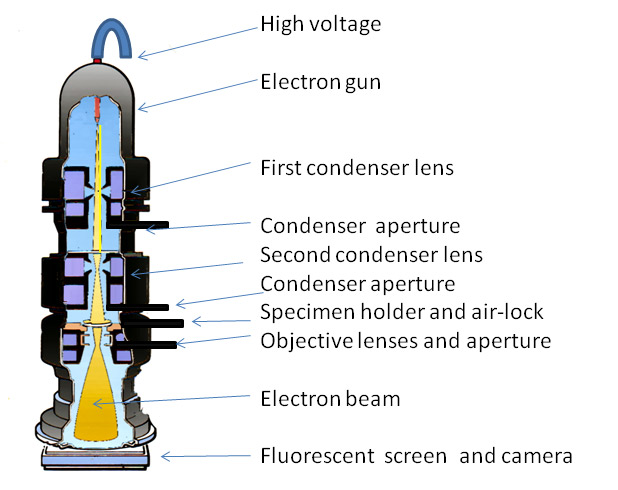 What Are the Differences Between a TEM and a Light Microscope?

Although TEMs and light microscopes operate on the same basic principles, there are several differences between the two. The main difference is that TEMs use electrons rather than light in order to magnify images. The power of the light microscope is limited by the wavelength of light and can magnify something up to 2,000 times. Electron microscopes, on the other hand, can produce much more highly magnified images because the beam of electrons has a smaller wavelength which creates images of higher resolution. (Resolution is the degree of sharpness of an image.) Figure 2 compares the magnification of a light microscope to that of a TEM. 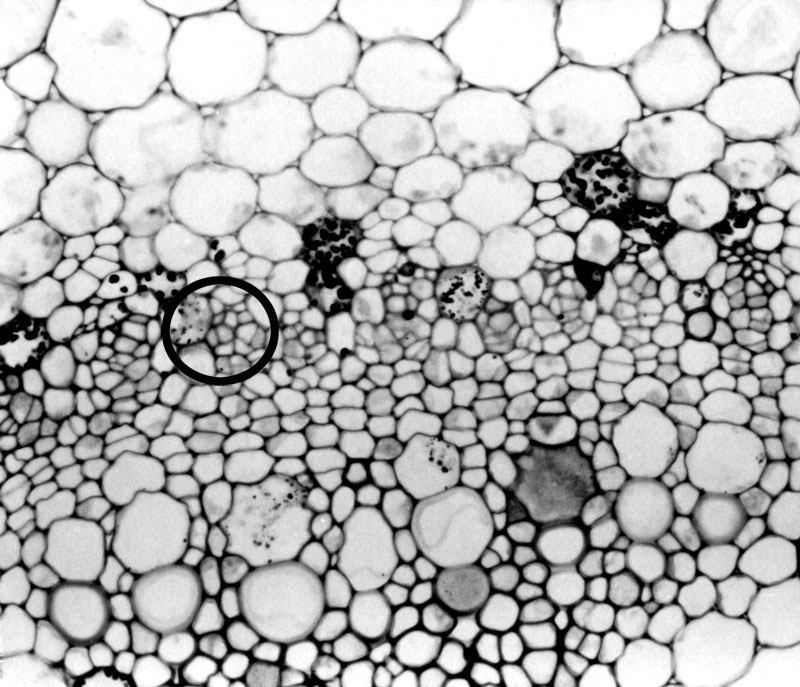 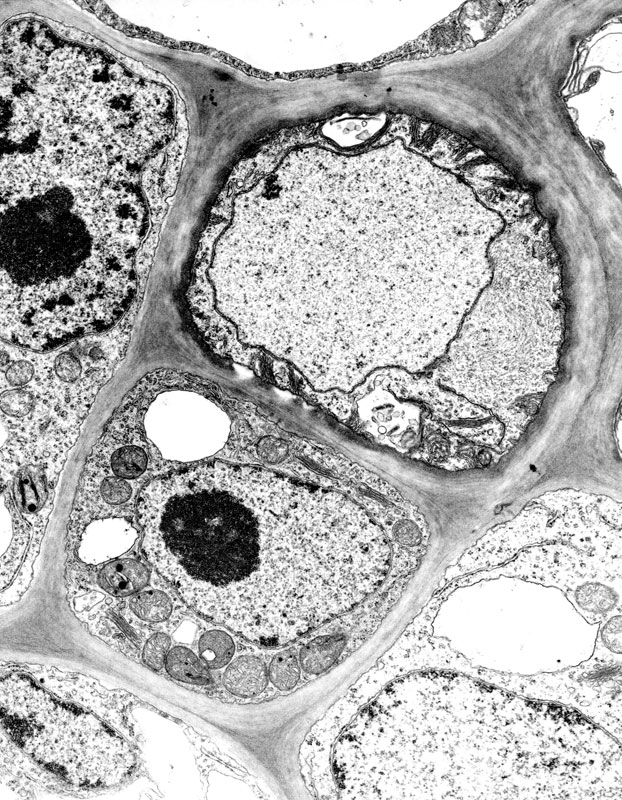 How Are TEM Specimens Prepared?

Specimens must be very thin so that electrons are able to pass through the tissue. This may be done by cutting very thin slices of a specimen’s tissue using an ultramicrotome.  The tissue must first be put in a chemical solution to preserve the cell structure.  The tissue must also be completely dehydrated (all water removed). 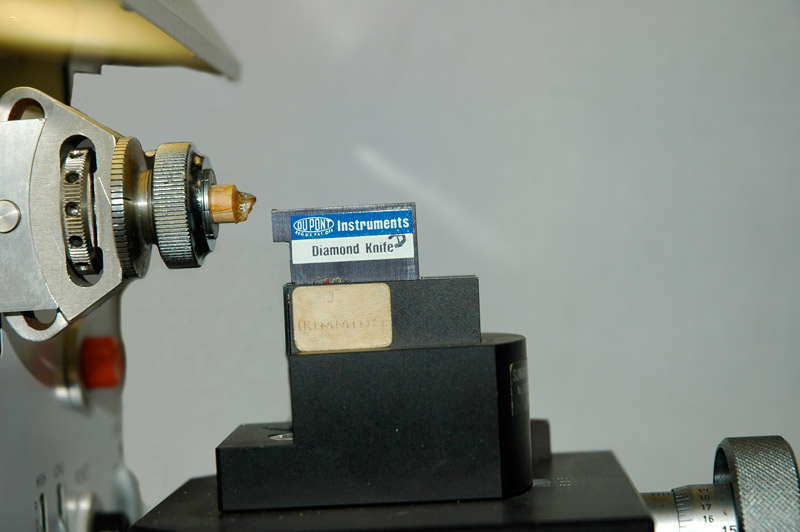 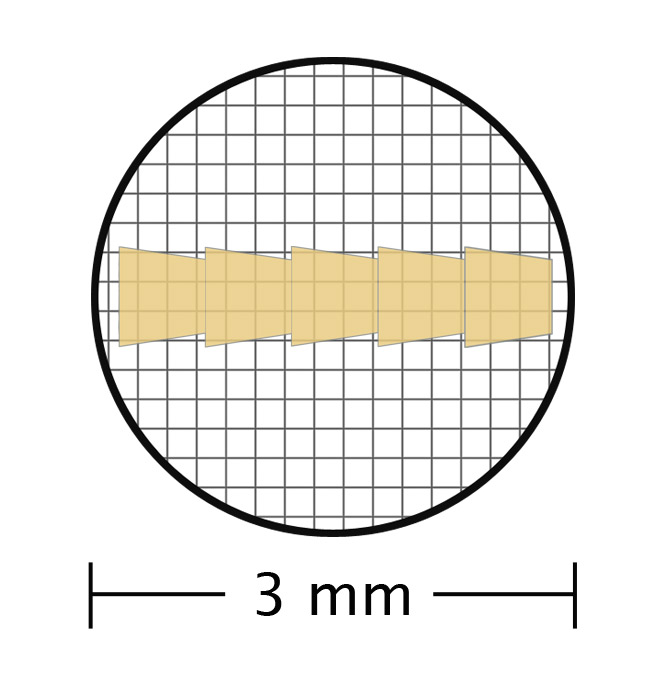 Once preserved and dehydrated, tissue samples are placed in hard, clean plastic.  The plastic supports the tissue while it is being thinly cut with the ultramicrotome (Fig. 3).

After sections are cut and mounted on grids, (tiny circular disks with openings,) a solution of lead is used to stain the tissue (Fig. 4).  The lead provides contrast to the tissue by staining certain cell parts.  When placed in the electron microscope, the electrons are scattered by the lead.  They do not penetrate the tissue or hit the fluorescent screen, leaving those areas dark.

Esau’s Work With the TEM

Esau started using the TEM in her research in the early 1960s.  When she moved to UC Santa Barbara in 1963, the campus purchased a Siemens electron microscope for her. She then received a grant from the National Science Foundation in 1969 for another new microscope which she used for the remainder of her career in Santa Barbara. The TEM significantly improved her understanding of the relationship between plants and viruses. Electron microscopy also aided in clarifying the functioning of sieve elements, the food conducting cells in plants. Without the TEM, much of this research would not have been possible. 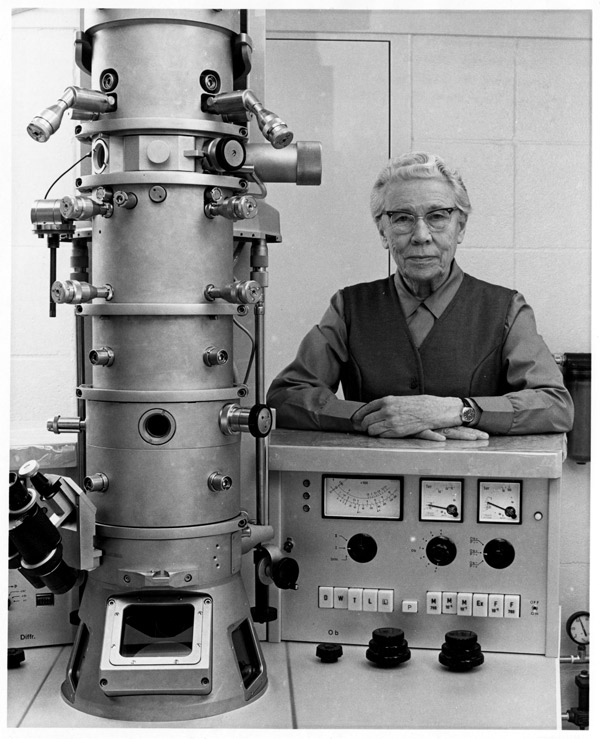 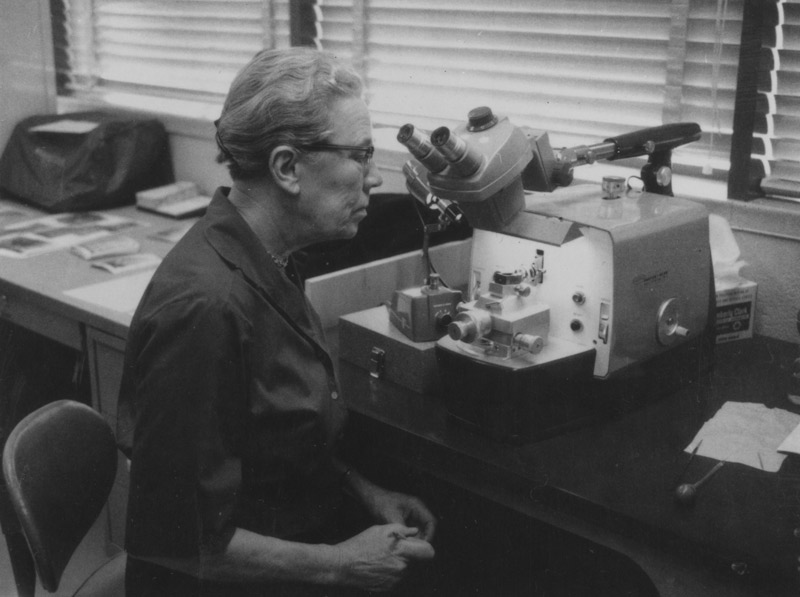