Visual Listening - The Identification and Monitoring of Bats at NCOS

From the pollination of rare plants as well as commercial crops to seed dispersal and pest control, bats provide innumerable ecosystem services to the world beyond their own intrinsic value. The North Campus Open Space (NCOS) project has restored 22 acres of open water habitat, most of which is available in winter and spring and may benefit some local insectivorous bat species. Incorporating surveys of bats into our monitoring regime helps us fill gaps in our knowledge and inform one of the project’s goals of developing a diverse, multi-level food web, which is a good indicator of a well-functioning ecosystem. Bats are particularly good indicators of ecosystem health and biodiversity because they feed on nocturnal insects and are sensitive to land use practices like development and habitat fragmentation (https://www.bats.org.uk/about-bats/why-bats-matter). Additionally, bats are prey for other wildlife such as raptors, weasels, and raccoons, making them an essential part of the food web (https://www.nps.gov/subjects/bats/benefits-of-bats.htm). 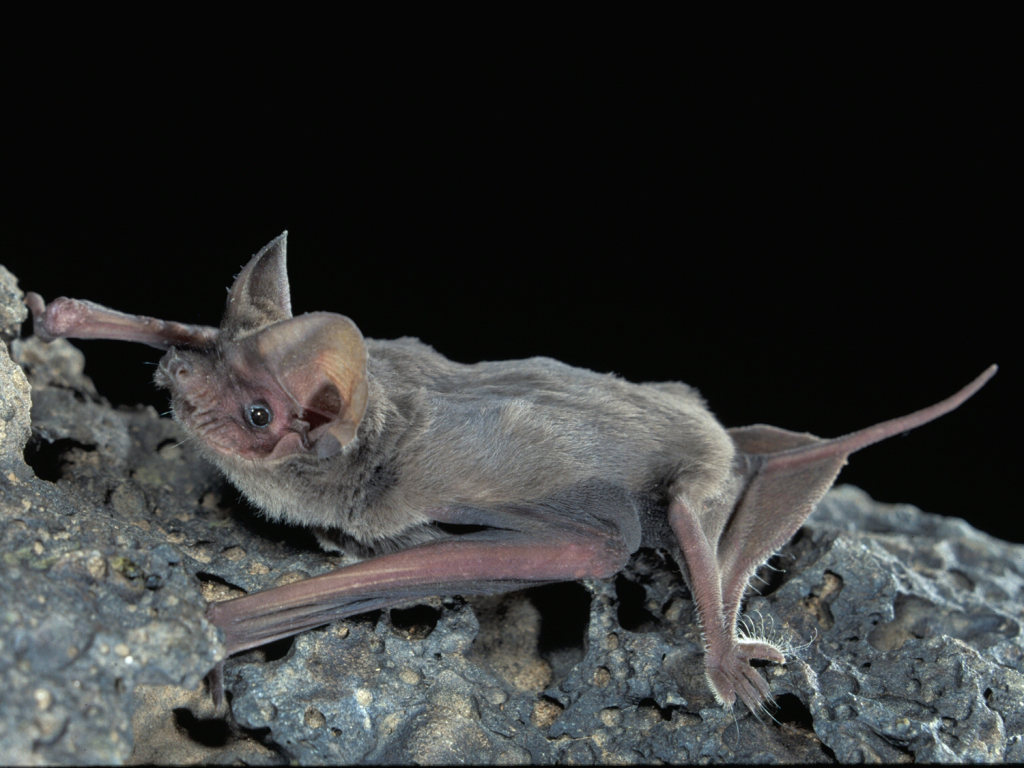 Bats use echolocation to navigate, hunt, and communicate with each other. Because of their poor eyesight, echolocation is essentially how bats “see". They are constantly emitting ultra-high frequency vocalizations, or calls, that bounce off their surroundings and inform them of what objects are nearby (including prey) and which direction to fly. Different bat species call in different frequency ranges with unique characteristics. This makes it possible to identify and assess the presence and activity of different bat species by conducting acoustic surveys to record and visualize their calls.

Last winter, CCBER began conducting acoustic surveys for bats using a Wildlife Acoustics Echo Meter Touch 2 Pro. This device is a specially designed microphone that attaches to a smartphone or tablet and works with an app to detect and record the ultra-high frequency calls of bats. The app also records the approximate location where a bat is detected, which allows us to create maps that we can use to examine potential trends in where different bat species forage at NCOS. During the first four weeks of every quarter, we conduct surveys along four different routes that collectively cover most of NCOS and adjacent areas such as the vernal pools at the North Campus Faculty Housing area. Each route is surveyed twice per week, once before sunrise and once after sunset.

In a single survey session, we can collect dozens or even hundreds of recordings depending on the abundance and activity of bats present and the length of the survey session (for example, Figure 1 below contains a map of all recordings and likely species from the four routes surveyed last spring). We then use Wildlife Acoustics' analysis software, Kaleidoscope, to process and sort the data and make viewing and identifying the calls more efficient. The software can also slow down the recordings to make them audible. Kaleidoscope includes an automatic identification function to suggest a likely species, however, studies have shown that it is only about 50% effective. Thus, recordings often need to be manually assessed with the use of reference documents and recordings. 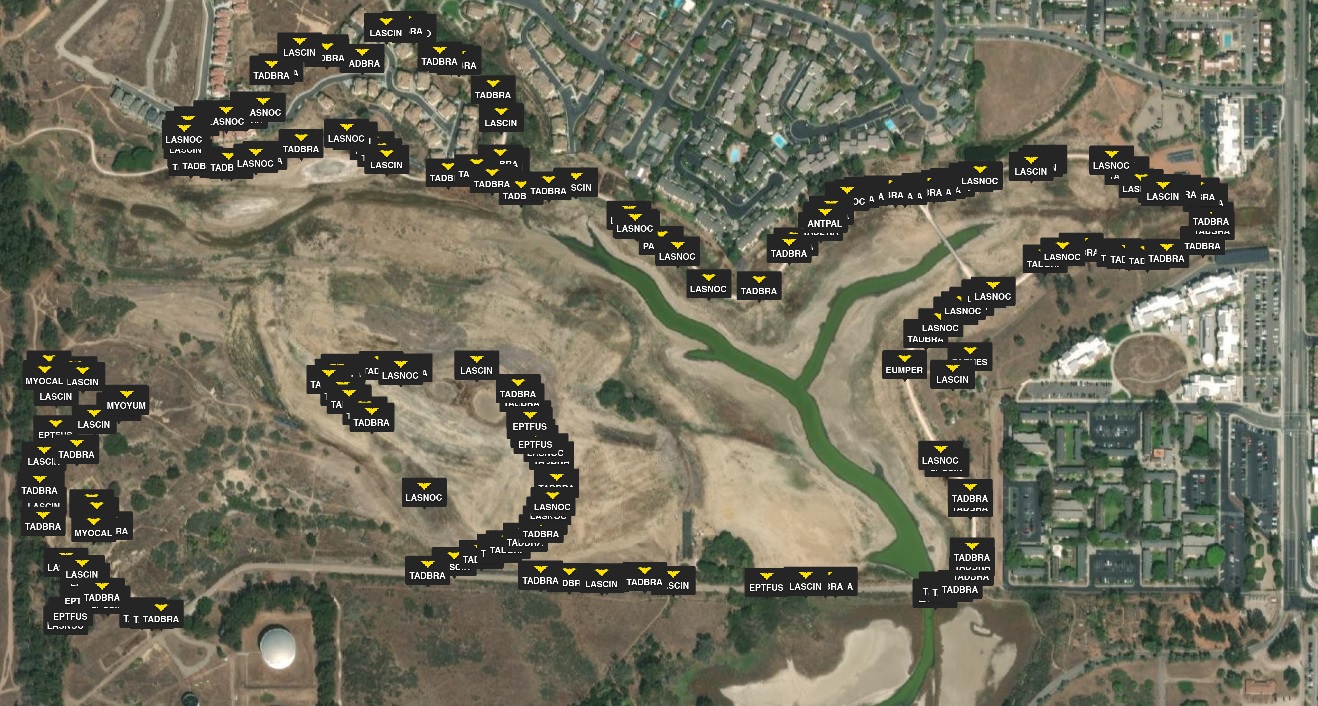 Figure 1. Map of the locations of unprocessed recordings of likely bat species at NCOS during acoustic surveys in spring 2020.

Three main factors can be used to identify species from recordings: the frequency measured in kilohertz (kHz), the volume or amplitude measured in decibels (dB), and the duration measured in milliseconds. To view these characteristics, we look at the spectrogram of a recording, which measures frequency over time, and the oscillogram, which measures amplitude over time (see Figure 2 below for an example). When it comes to identifying recordings, we first look at the characteristic frequency of a recording to narrow down the possible species. The characteristic frequency of the call sequence in Figure 2 is 27.201 kHz, which puts it in the range of several bat species including the Pallid bat (Antrozous pallidus), Big brown bat (Eptesicus fuscus), Silver-haired bat (Lasionycteris noctivagans), and a few others. Next, we consider the special characteristics of the call, which are subtle but diagnostic qualities that may permit differentiation between species. For example, one special characteristic that is common for the Big brown bat is 2-3 calls with shorter intervals between and then a longer interval before the next set (Figure 2).

Figure 2. Visualization of a recording of vocalizations, or calls, by a Big brown bat (Eptesicus fuscus). The upper portion is the oscillogram that measures amplitude, and the lower portion is the spectrogram that measures frequency. The variation in call intervals, a common character of Big brown bat calls, is indicated as well as the three main phases of vocalizations used during foraging for prey: search, approach, and terminal phases.

It also helps to look at the recording in a time-compressed view, which removes the silence between calls to emphasize call structure at the detriment of call interval and sequence information. When we look at the same recording above (Figure 2) in compressed time view, we see that most of the calls have a hockey stick shape in the spectrogram (Figure 3). Calls with high frequencies above 65 kHz are also characteristic of Big brown bats. The straight horizontal line across the spectrogram below marks 65 kHz.

Figure 3. Visualization of a time-compressed recording of vocalizations, or calls, by a Big brown bat (Eptesicus fuscus).

Finally, it is common in Big brown bat call sequences for the ends of some calls to hook upward. In the enlarged spectrogram below (Figure 4), we can see that the first, third, fifth, and eighth calls in the sequence all hook upward at the end.

Figure 4. Enlarged view of a spectrogram of a sequence of calls by a Big brown bat. Calls with a characteristic upward hook at the end are indicated with a white line. 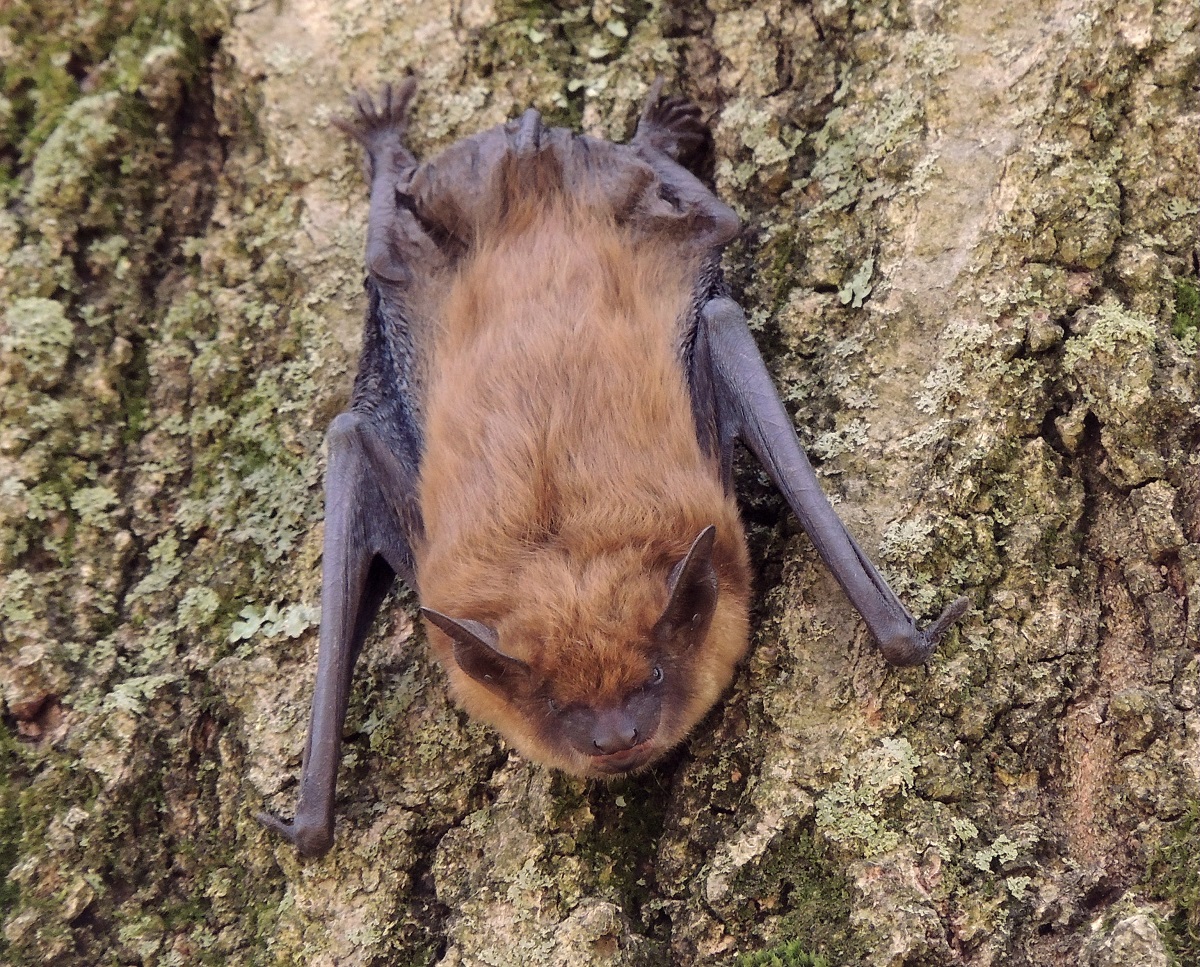 It is important to note that these are just a few of the special characteristics used to identify Big brown bats. Each species has many characteristics to aid in their identification. In addition, calls from bats of the same species or even an individual can vary widely and calls of many different species can overlap significantly. Many experts agree that 4-5 diagnostic calls within a sequence or in consecutive sequences are needed to confirm an identification. Consequently, many recordings of calls remain ambiguous. You can learn more about the characteristics that are used to identify most California bats here, and we have a more in-depth description of how recordings of bat calls are analyzed in a Google Slides presentation.

The data collected this year reflects similar trends in a survey conducted in 2017 using a single, stationary detector attached to a tree for about a week each quarter (read our story about that survey here). Both surveys suggest seasonal variation in diversity and abundance of bats. The 2017 data shows the number of recordings successfully identified for a total of 11 different species detected from April to October 2017 (Figure 5). The data we recorded this year (2020) is summarized in the chart in Figure 6, which shows the number of recordings the software was able to automatically identify (potential identifications) with limited manual assessment. Our surveys this year identified a total of potentially 7 species visiting and possibly utilizing NCOS as roosting and foraging habitat. 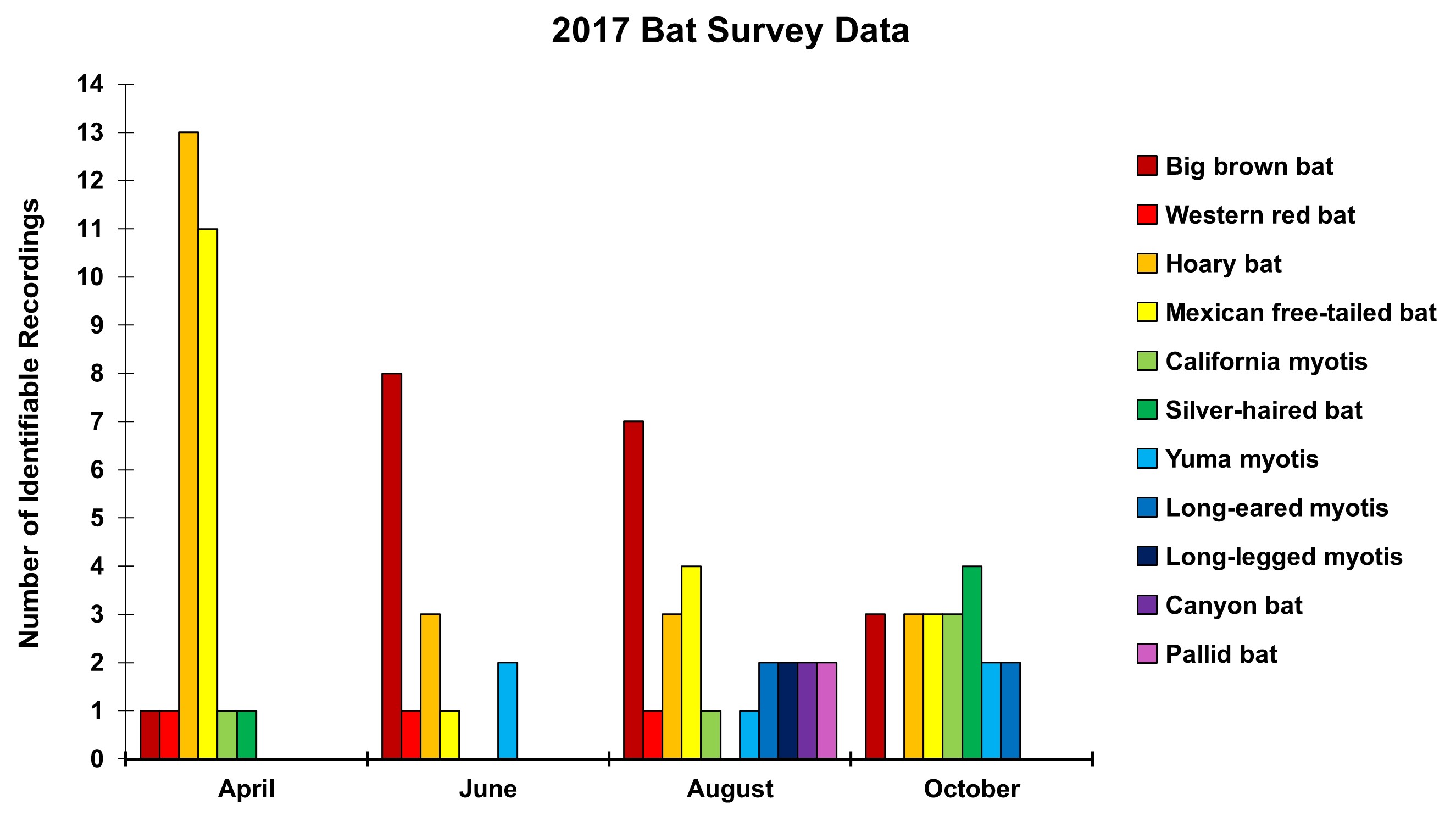 Figure 5. Chart of the number of identifiable bat species recordings from four week-long surveys with a single, stationary acoustic detector at NCOS in 2017. 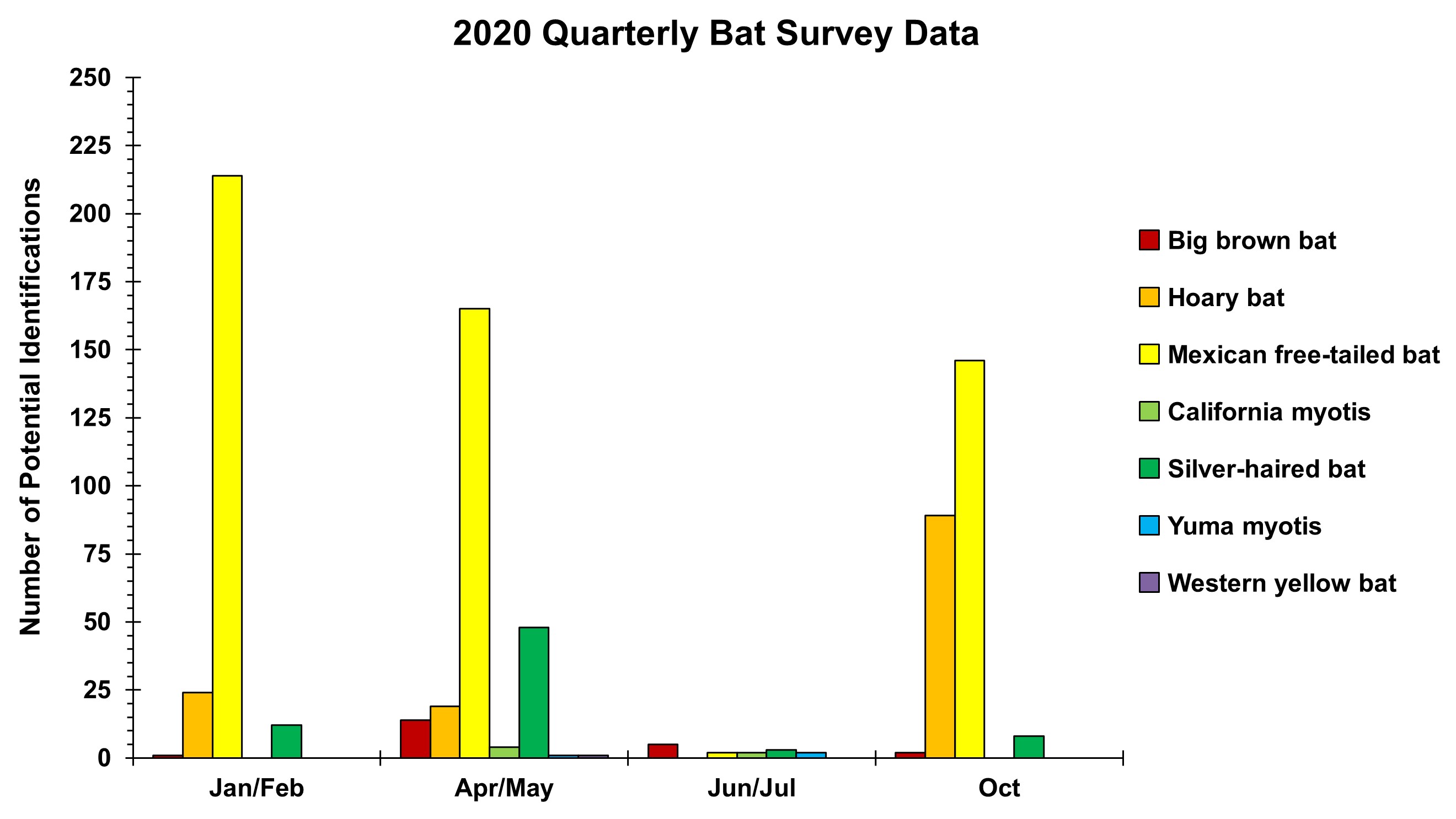 Figure 6. Chart of the number of potential identifications of bat call recordings during quarterly acoustic surveys using a mobile detector at NCOS in 2020.

The 2017 data shows a drop in total identifiable recordings from 28 in April to 15 in June, and then back up to 25 in August, and 20 in October. This suggests a decrease in abundance in June. The data also shows an increase in species identified in August, from five species in April, five in June, ten in August, and seven in October, suggesting seasonal variation in species diversity that could be due to migratory behavior. The 2020 survey data similarly shows a drop in potential identifications in June and July, and also depicts seasonal variation in diversity with four species recorded in January and February, seven in April and May, five in June and July, and four in October.

One of the most common species detected is the Mexican free-tailed bat, which is one of the most widely distributed mammalian species in the western hemisphere and includes 9 different subspecies. In California, we have Tadarida brasiliensis subspecies Mexicana. They are known to be primarily migratory in other states, but seasonal patterns are not well understood in California. They do not seem to feed and/or live near NCOS in June and July. Other common species on site include the Big brown bat, Eptesicus fuscus, the Hoary bat, Lasiurus cinereus, and the Silver-haired bat, Lasionycteris noctivagans. The Big brown bat has a very broad distribution ranging from Alaska and northern Alberta to northern South America. They seem to be fairly sedentary, not migrating large distances. The Hoary bat is the most widespread of all North American bats. The specific migration routes of Hoary bats are not well understood in most places, and while they are thought to be highly migratory, they are also known to spend winters along California Coasts. The Silver-haired bat is found from southern Alaska and Canada through most of the United States and into northeastern Mexico. Seasonal records suggest considerable north to south migration for the winter and it is thought that they only migrate through Santa Barbara County during the spring and fall (http://wbwg.org/western-bat-species/). 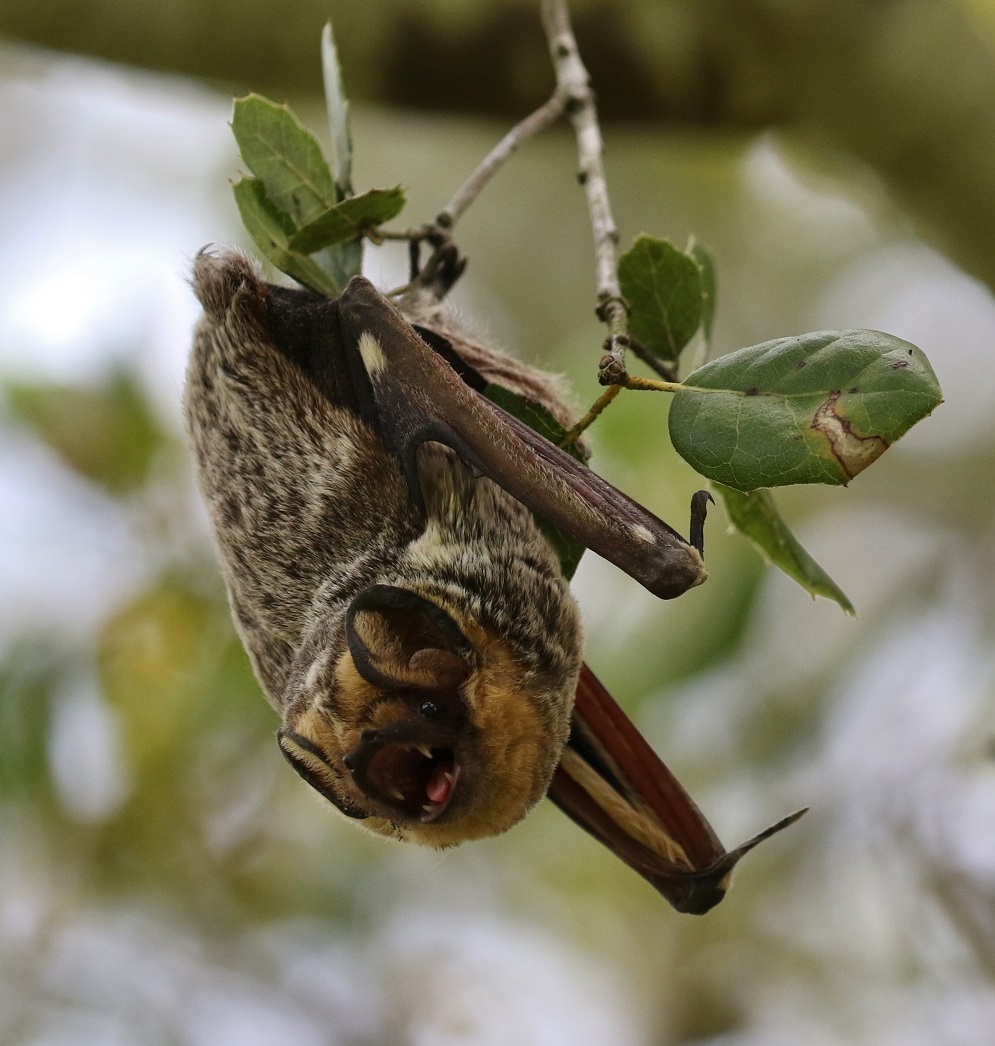 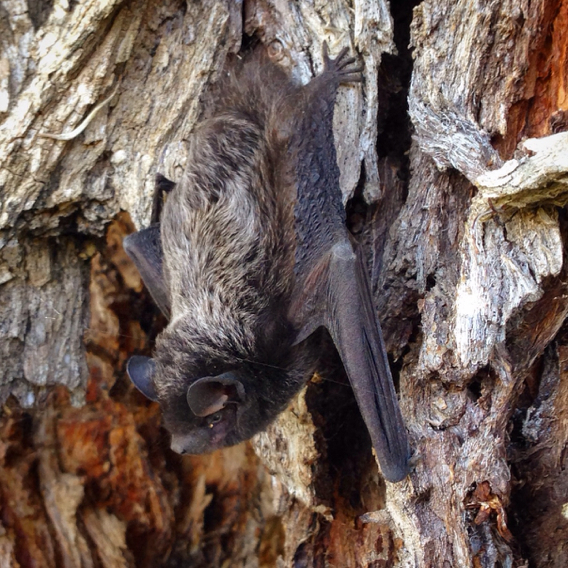 In an effort to help entice more bats to NCOS, we installed two bat boxes over the last year. One is on the unrestored area of Whittier parcel and the other is in the southwest area of the site below the mesa.  While it is common for years to pass before bats choose to occupy boxes like these, we remain hopeful that they will eventually provide a suitable roost for some local and/or migratory bats.

As for the acoustic surveys, we plan to continue them on a quarterly basis in the coming years to monitor for changes in bat abundance and diversity as the restoration of NCOS progresses, and to further our understanding of bat distributions and migratory patterns in the area.

This story was written by Lauren Weichert and Ryan Clark.