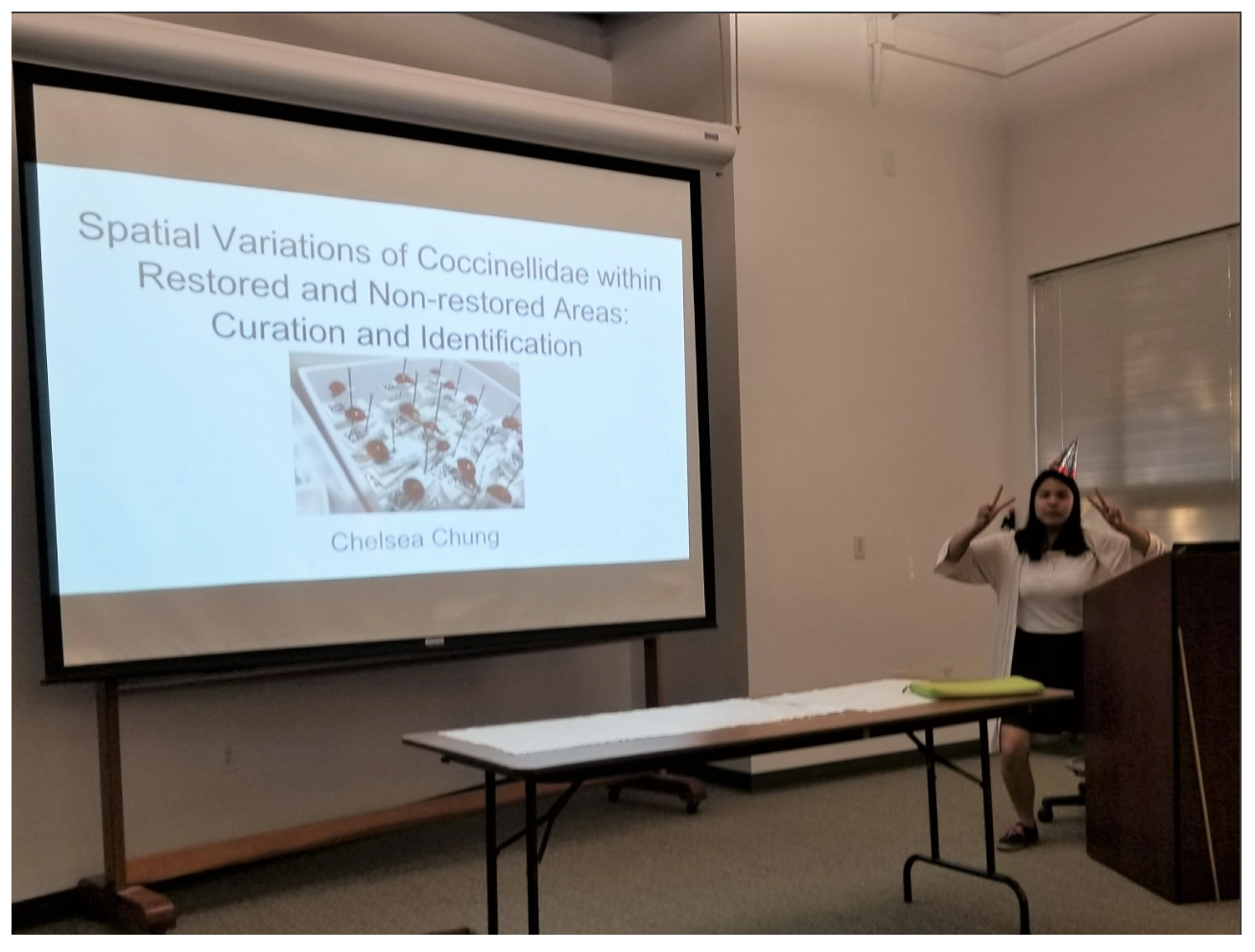 Last quarter at one of CCBER's weekly natural history meetings, where interns present on research being done with the collections, Chelsea Chung presented on the Lady Beetle Project. The project aims to determine the effect of restoration work on the distribution, abundance, and diversity of ladybugs, or lady beetles, (family Coccinellidae) in chosen restored and non-restored habitats around UCSB and Goleta.

This quarter is Chung's last as one of the lead interns of the project, which was started in Fall quarter 2017 by CCBER research affiliate Justin Luong. Luong has previously been involved in the recovery of the Nipomo Mesa Lupine. Though he is now a graduate student at UC Santa Cruz, he oversees the lady beetle project remotely. 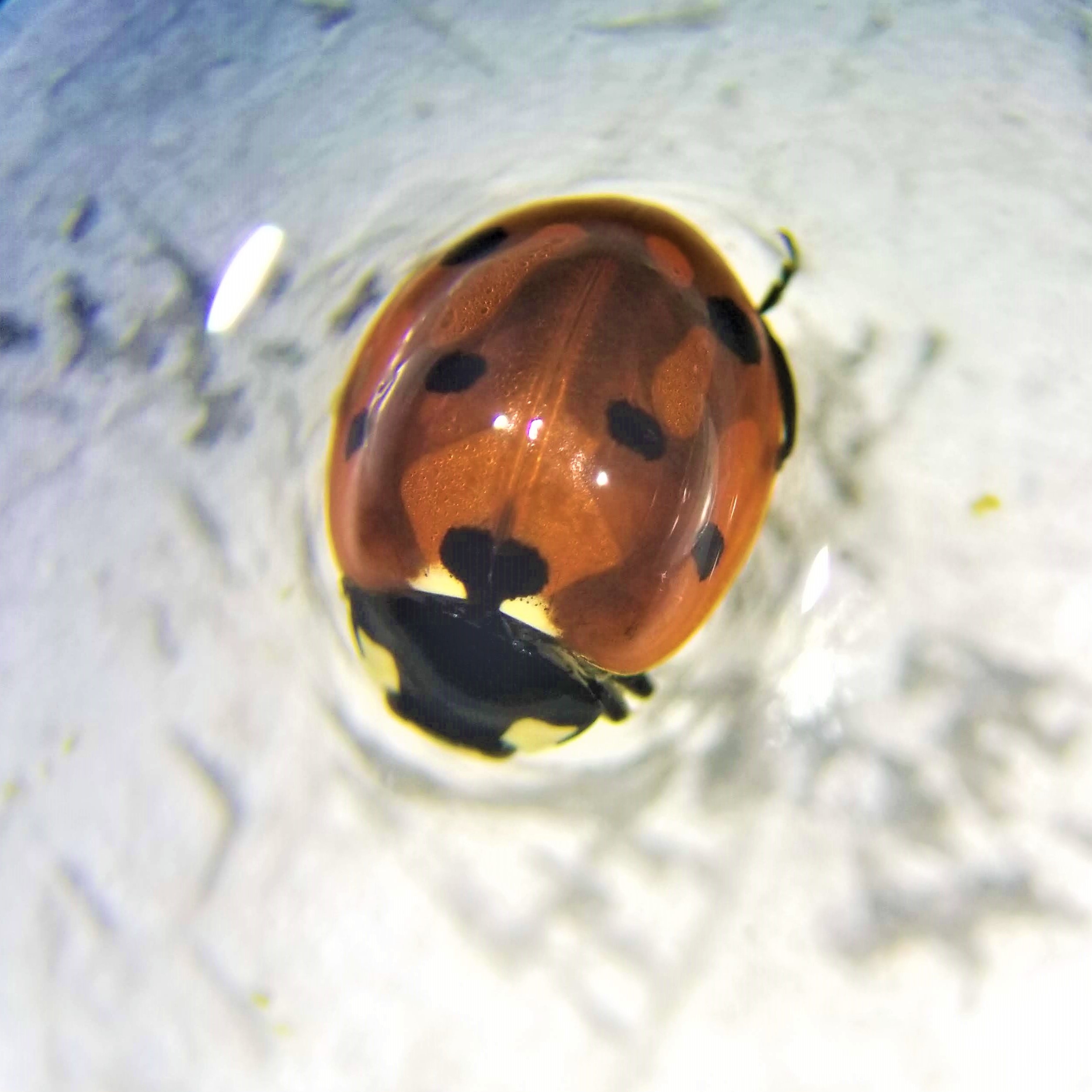 The project was established, in part, to understand what Coccinellidae species are present in the Santa Barbara area. In California, there are over 100 genera. They are popular as biological control agents, and are purchased from garden stores to eat plant-damaging aphids and other agricultural pests.

In the 1950s to the early 1970s, there was an attempt to establish the seven-spotted ladybird, Coccinella septumpunctata, in the East Coast so they could help control crop pests. After several attempts, the species was successfully established in New Jersey and is now found everywhere in the United States. Both the common and Latin names of C. septumpunctata refer to the seven spots on its hard outer wings, or elytra.

Another species that was brought into the States is the similar Harmonia axyridis. These two invasives are outcompeting native species such as C. transversoguttata, C. novemnotata, and Adalia bipunctata.

CCBER's Lady Beetle Project deploys 24 student intern field collectors who capture specimens from four restored and six non-restored sites. The collectors work 3 hours a week at two sites each, and each site is visited at least two times a week. To collect the insects, no traps are used. Instead, all beetles are collected using sweep netting and hand collection. 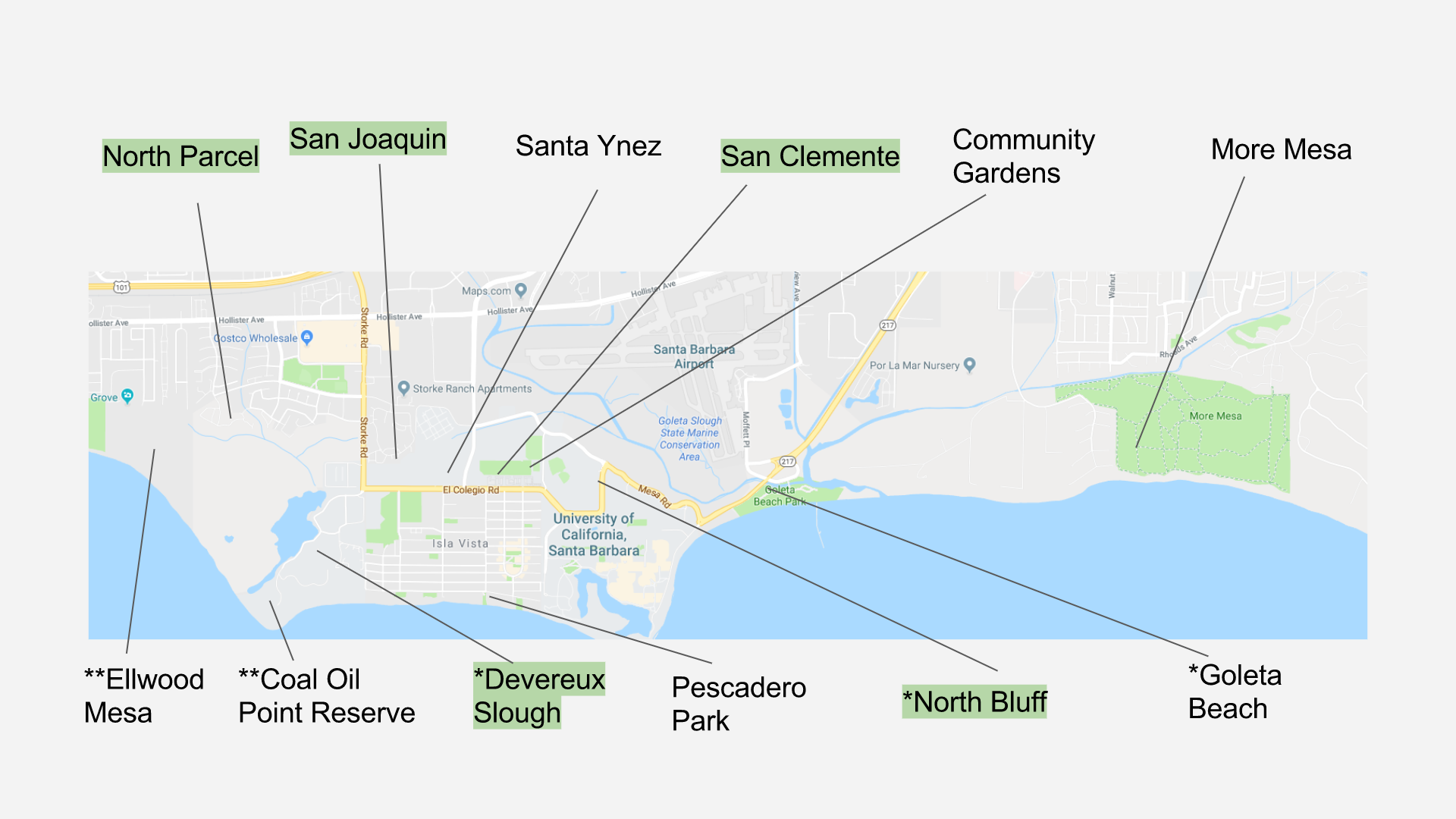 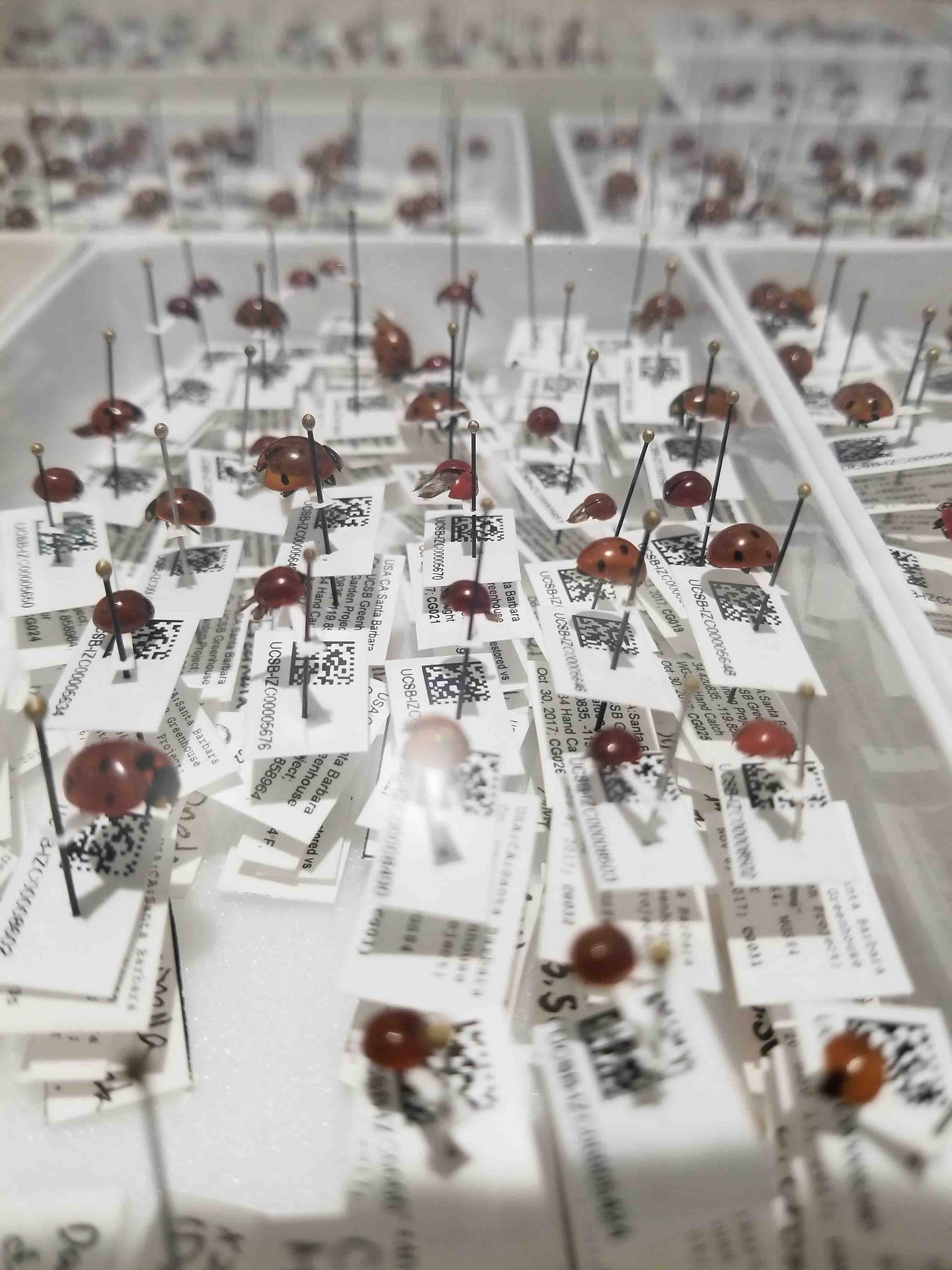 Above: This map lists all of the sites that have been used in the project. The ones with single asterisks, *, have been removed from the project, while the ones with double asterisks ** were grassland sites added Winter Quarter 2018. The ones highlighted in green are restored sites. Left: Processed lady beetles entered into the collection.

The data collected along with the specimen includes weather and temperature, plant and where on it the insect was found, and quantity. Additional valuable parameters are prey, other lady beetles nearby, and site qualities such as tree coverage, ground coverage, and plant life.

The information of other lady beetles nearby was added because cannibalism between coccinellids is prevalent when prey levels are low. Other parameters that changed included shifting sites from those that had little to no beetles, such as Devereux Slough, to new sites that hopefully have more, such as Coal Oil Point Reserve to the west of the slough.

After specimens are collected and placed in 70-75% ethanol, they are processed by four curation teams of 16 people total, who work three hour shifts at CCBER to identify, pin, and store the beetles. These specimens will eventually be digitized in UCSB's Invertebrate Zoology Collection on the online Symbiota portal. Read about the digitization process here. 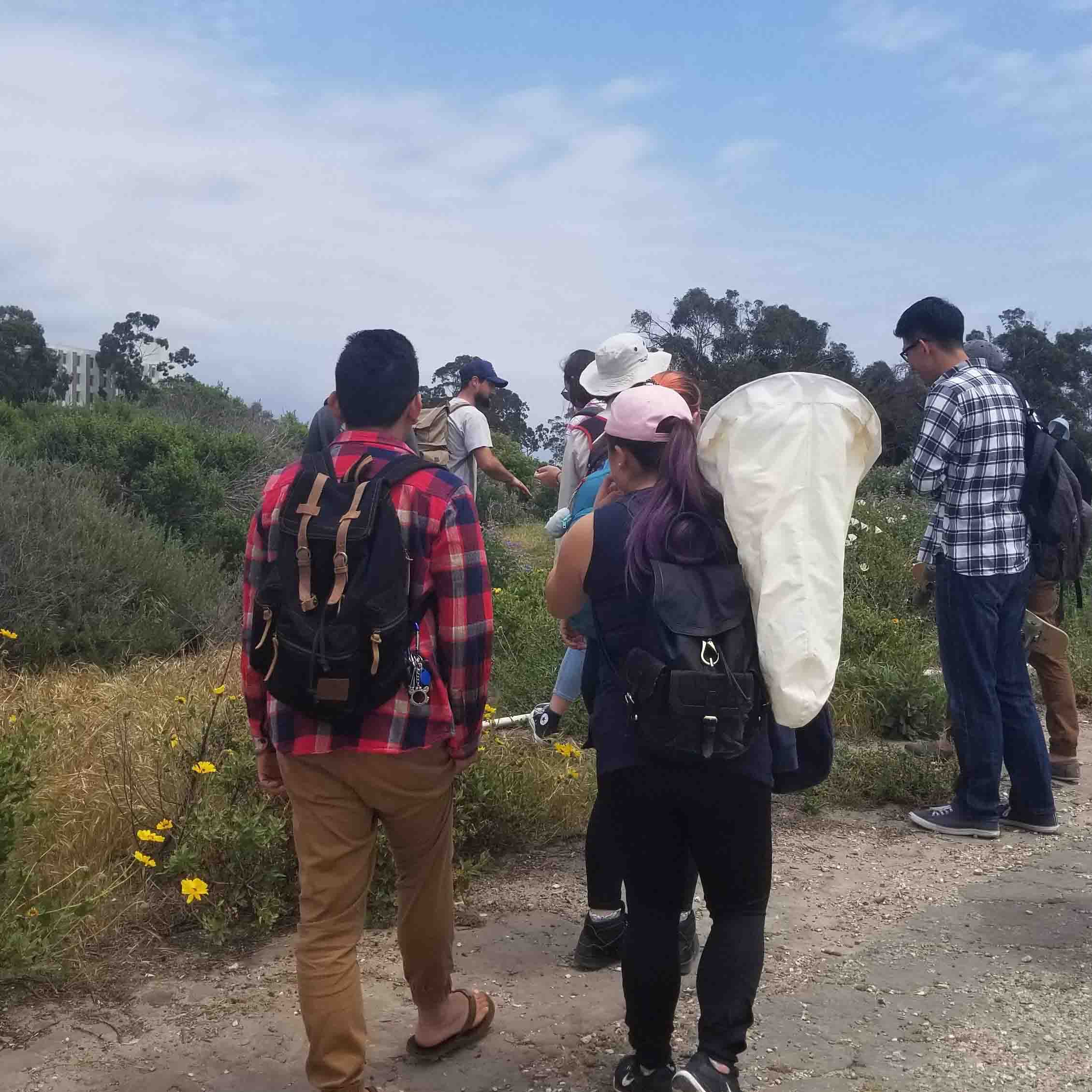 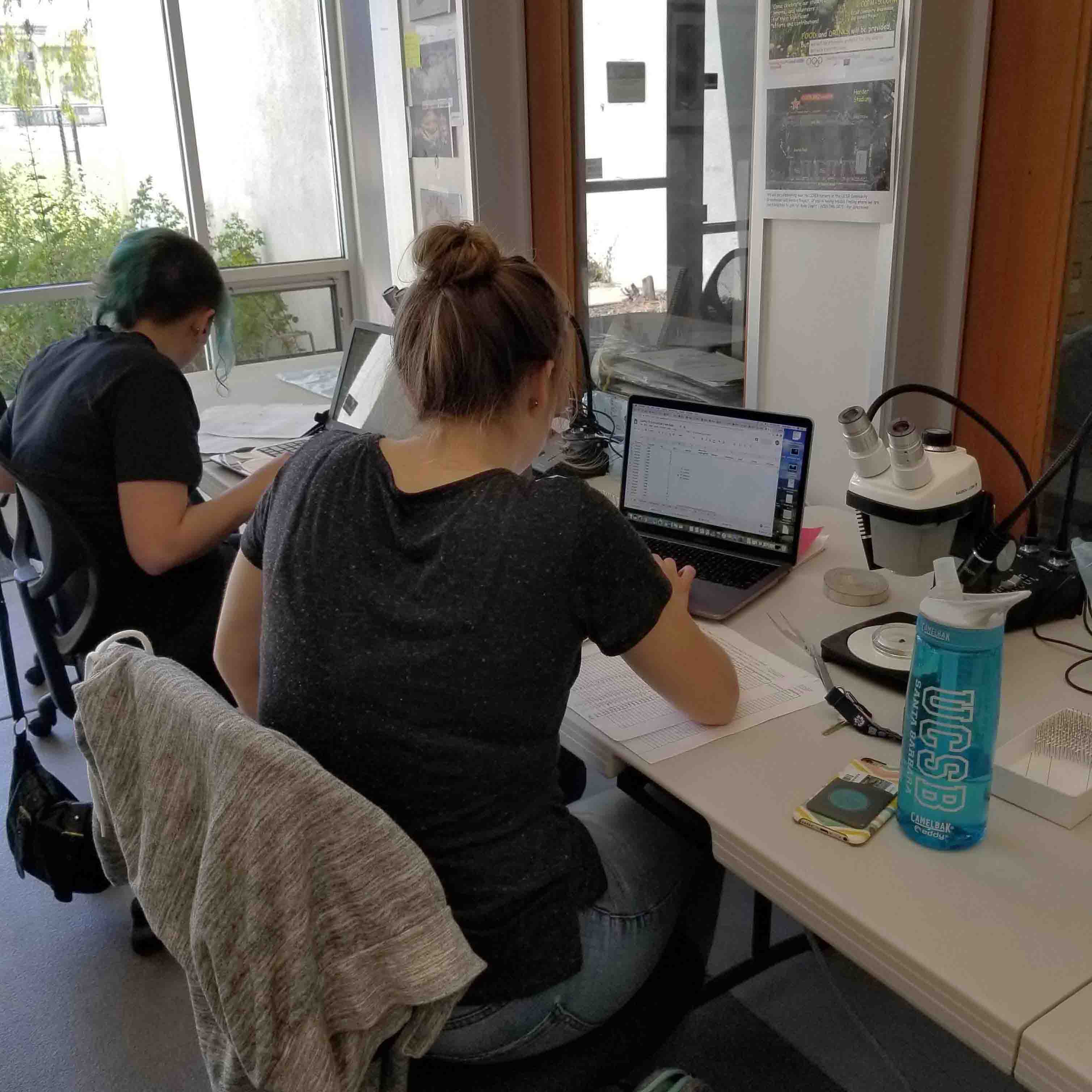 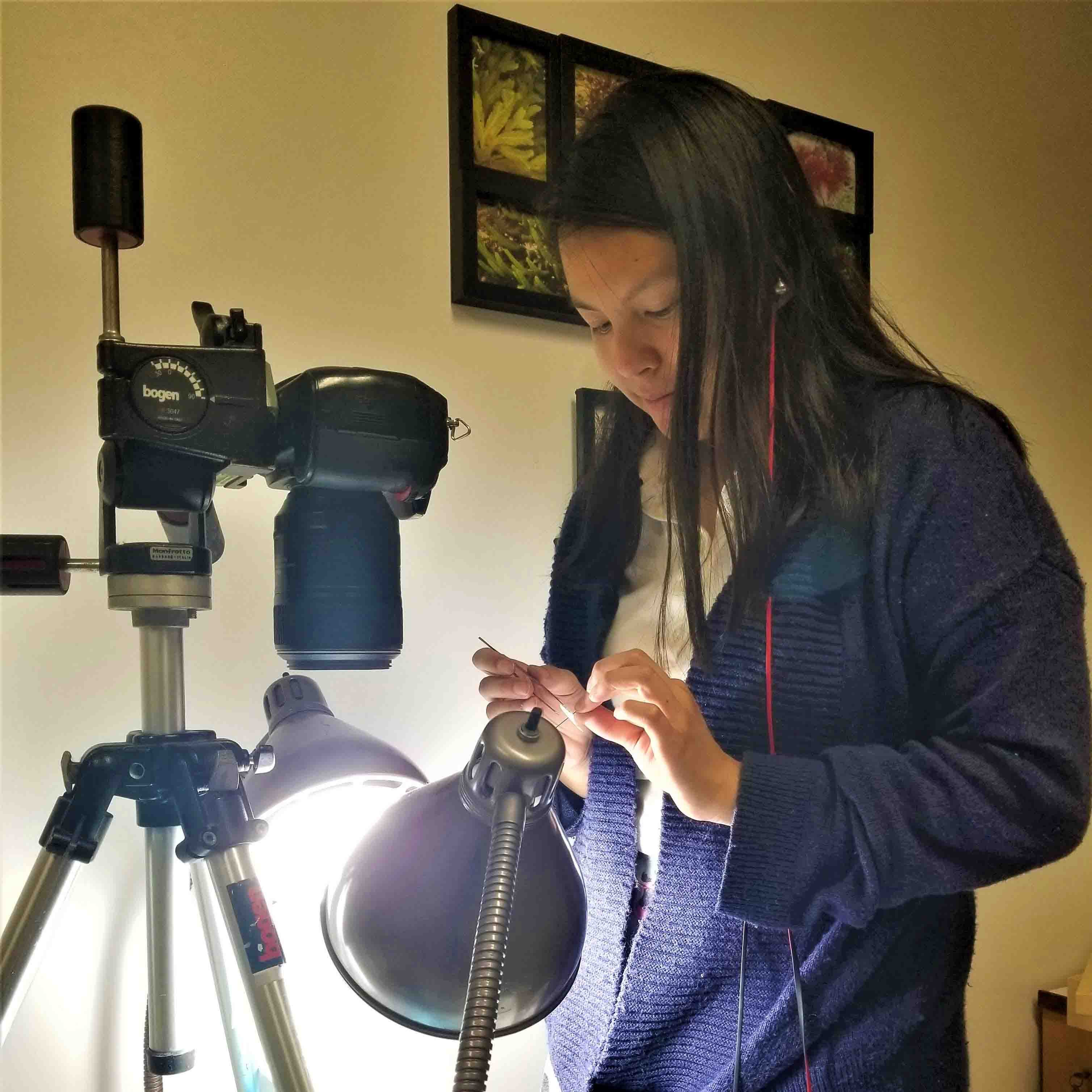 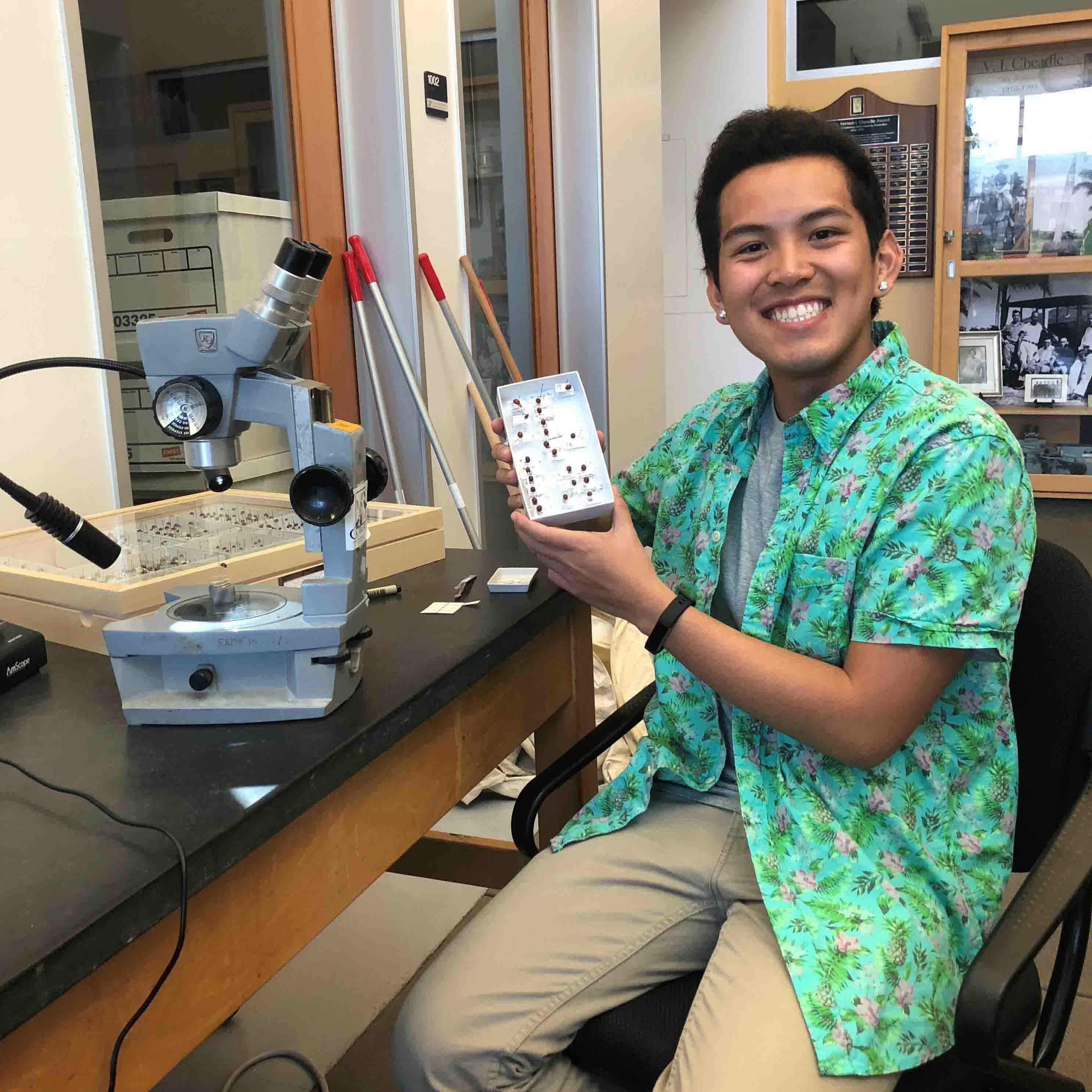 From field to collections. Top row: Student interns work on field collecting to bring specimens back to CCBER, where they are processed and identified. Bottom row: Lead intern Chelsea Chung works on imaging specimens for the collection, while lead intern Barry Lao showcases processed specimens.

Chung co-leads the field and curation interns with Barry Lao to schedule people and shifts and organize the project's direction. Under them, Eric Kim and Chris Orozco are in charge of field collection and training, and Katie Lefley oversees the curation portion of the project. This quarter is Chung and Lao's last quarter as head interns.

Over the course of two quarters, the interns have caught and processed 1071 individual lady beetles, with Spring 2018 bringing it to over 1200 insects. The most common species across sites is C. septumpunctata, though the native beetles Hippodamia convergens and Cycloneda sanguiena have also been fairly widespread. Further analysis remains to be done. 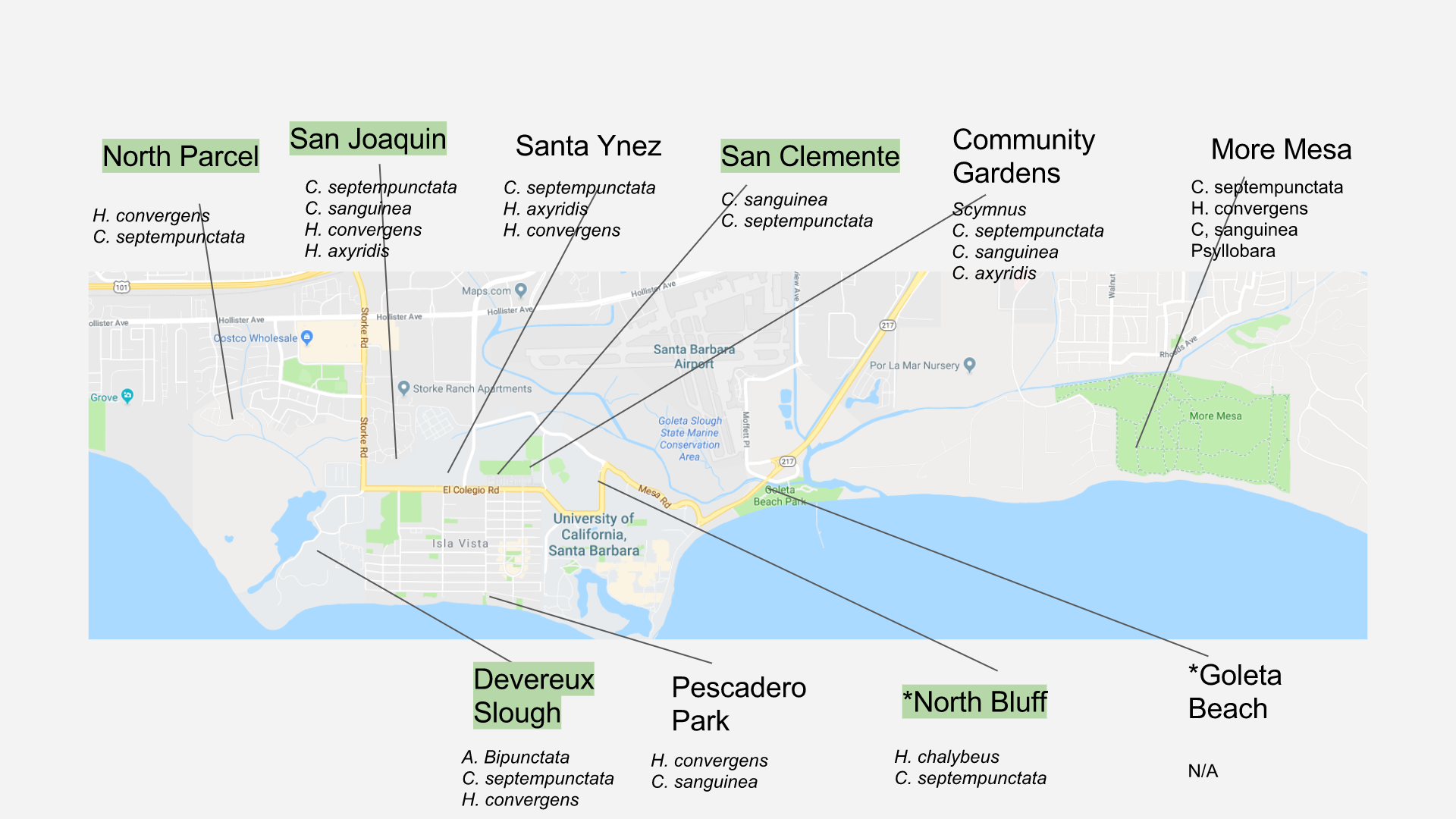 This map lists all the species found at the different sites as of Fall quarter 2017.

To assist with the comparison of lady beetle diversity in restored versus non-restored areas, Chung has been working to create a key to identifying California coccinellids to species. She has referenced books from the Los Angeles and Santa Barbara Museums of Natural History, as well as online resources created by Santa Barbara musem entomology curator Matthew Gimmel. Gimmel is also part of the project for consultation and identification of difficult specimens.

Coccinellids are easily told from other beetles by their legs. They can then be determined to morphospecies and perhaps species by further distinguishing characteristics, including differences in their eyes, tarsal claw at the ends of their legs, post coxal line on the underside, and mouthparts.

Recently, the project interns have started looking into coccinellid morphometrics, or precise measurements of features that will improve identification accuracy and increase the current understanding of how structure determines function. Most important are mandible morphometrics, and there is a literature group among the interns led by curation intern Katie Lefley to read and discuss papers on morphometrics. Another recent addition to the project has been weight data of incoming specimens using a new scale delivered earler this month. 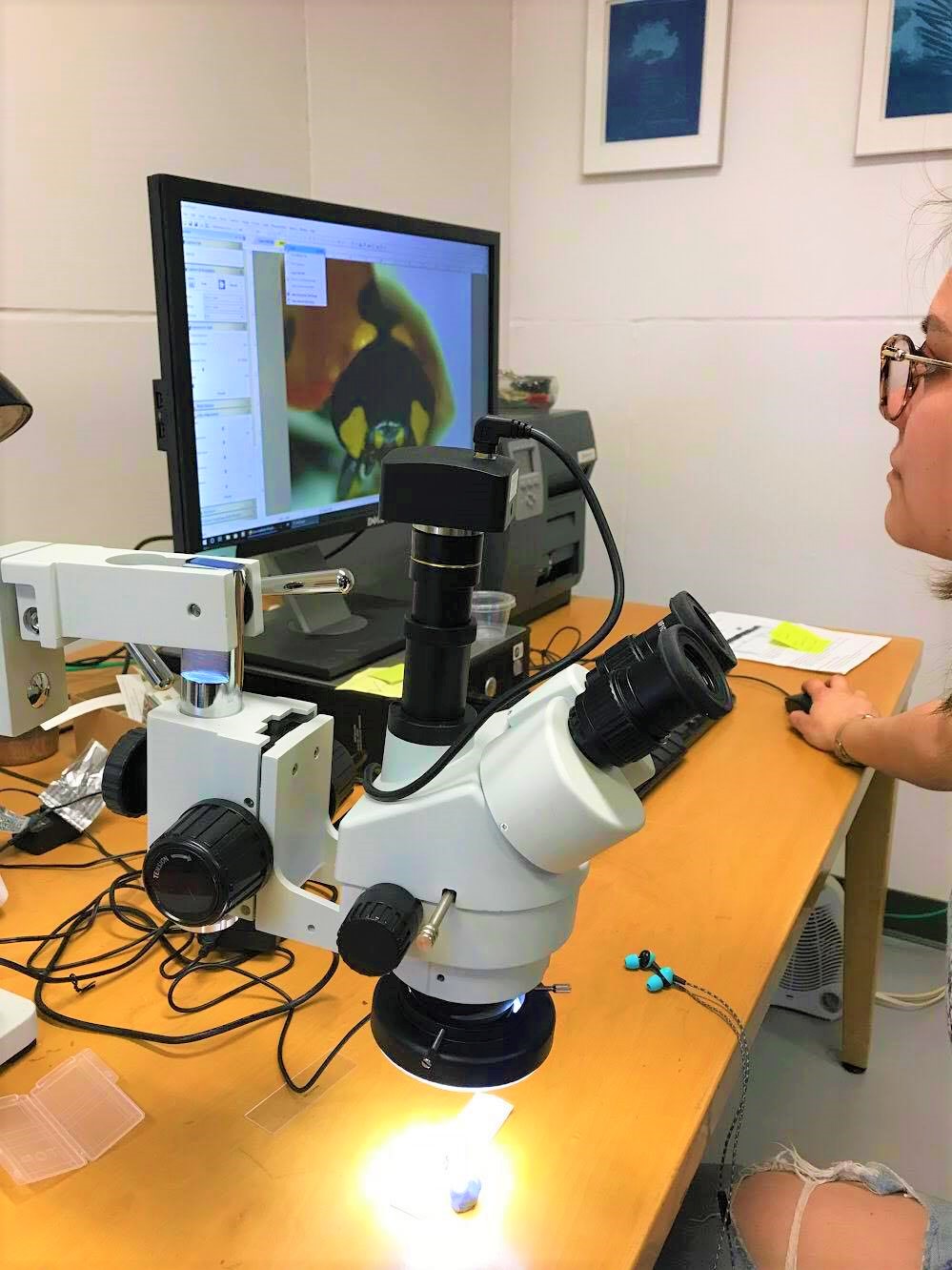 A lady beetle intern uses a powerful microscope at CCBER that has been hooked up to a camera to view close-up features of a C. septumpunctata specimen.

Working on the lady beetle project and learning to identify them has been a valuable experience for Chung, despite biology not being her area of study. "It's been a complimentary side to my normal studies of geography and art," Chung said.

As 2018 progresses in this quarter and the next, the Lady Beetle Project has been considering new research questions. They would like to investigate whether there is a correlation between prey and vegetation, and prey and habitat. They also want to examine susceptibility to predation and cannibalism in different groups.

Interested in learning more? Want to contribute? The lady beetle crew is currently accepting new field collection student interns for units over the summer. Contact project head Justin Luong at justinluong@ucsb.edu with questions or to apply for the internship!

Thanks to Justin Luong, Chelsea Chung, and Barry Lao for their help in contributing information and fine-tuning, and thanks to UCSB Coastal Fund for funding part of the project.