Search for the Giant Sphinx Moth 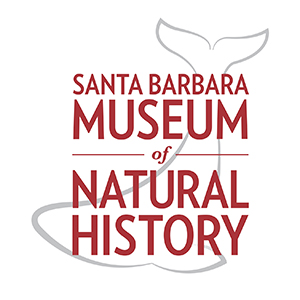 Last week I went to the Santa Barbara Museum of Natural History (SBMNH) and had the pleasure of meeting with Sandy Russell, the museum's Entomology Research Associate. Russell studies insects of the order Lepidoptera, the butterflies and moths.

This meeting's species of interest was the giant sphinx moth, Cocytius antaeus, which originates from Mexico and has never been recorded in California before its first appearance in Santa Barbara in 2015. Since then, Russell has documented 48 observations, and this number will likely increase as the weather warms and citizens (like you!) keep an eye out and report moth sightings to the Museum.

Most collected C. antaeus specimens have been deposited into SBMNH's entomology collection. CCBER retains the only Isla Vista record as of now - a giant sphinx moth had been found in Isla Vista in spring of 2016, collected by a UCSB student and rediscovered in CCBER's collections months later. 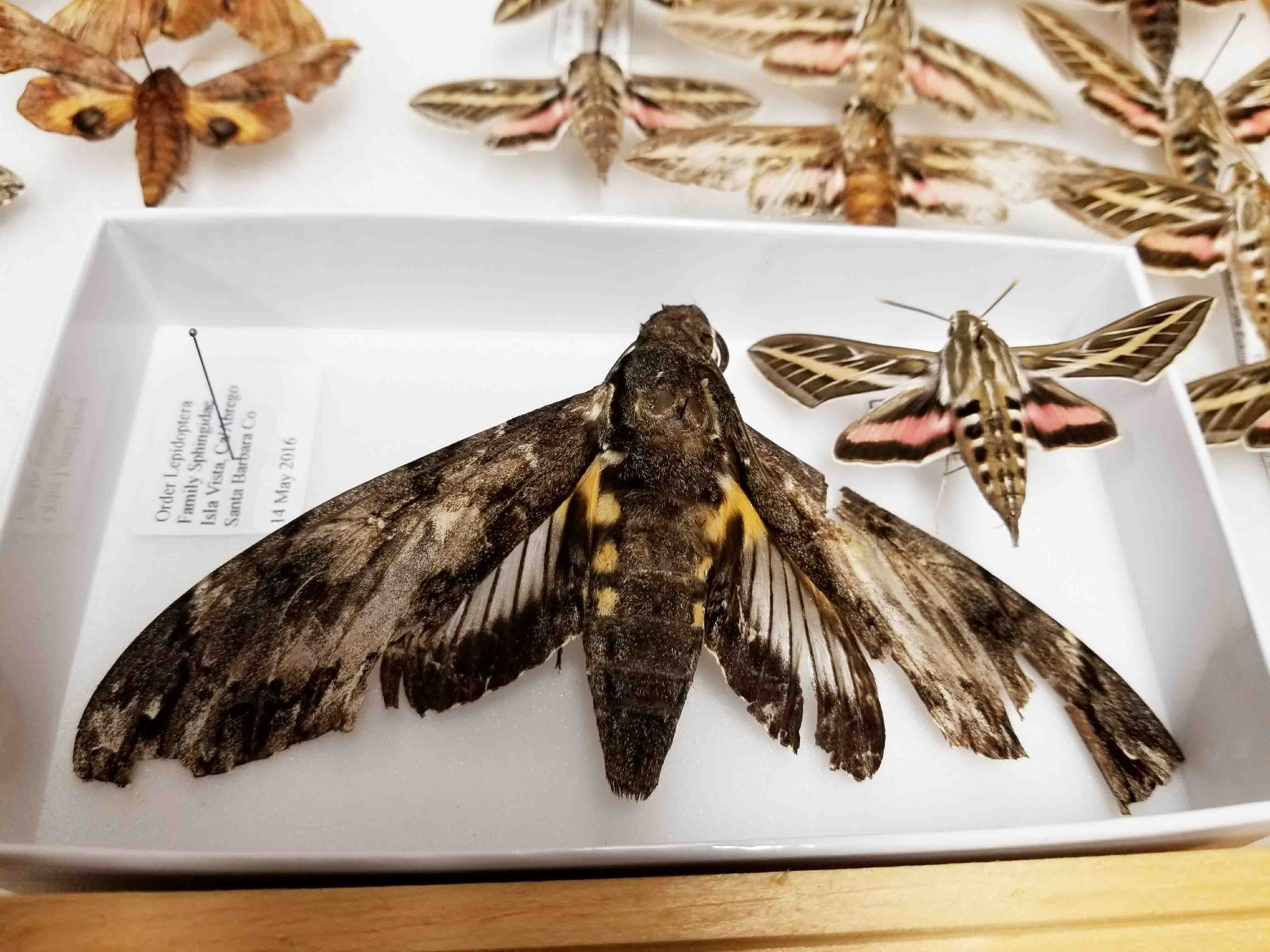 The giant sphinx moth prefers tropical climes. Prior to its appearance in Santa Barbara, it had only been found regularly in South America, Mexico, Texas and Florida, with a few records in Arizona. C. antaeus is unique in that its long proboscis makes it the only pollinator of the rare ghost orchid (Dendrophylax lindenii) of Florida, Cuba, and the Bahamas. The moth has also been associated with the cherimoya tree (Annona cherimola), which produces fruits also called "custard apples" and is grown throughout Southern California. Where this tree is cultivated, it has to be hand-pollinated to bear fruit. Russell's hypothesis is that the giant sphinx moth's appearance in the States is directly linked to the transport and cultivation of cherimoya trees. 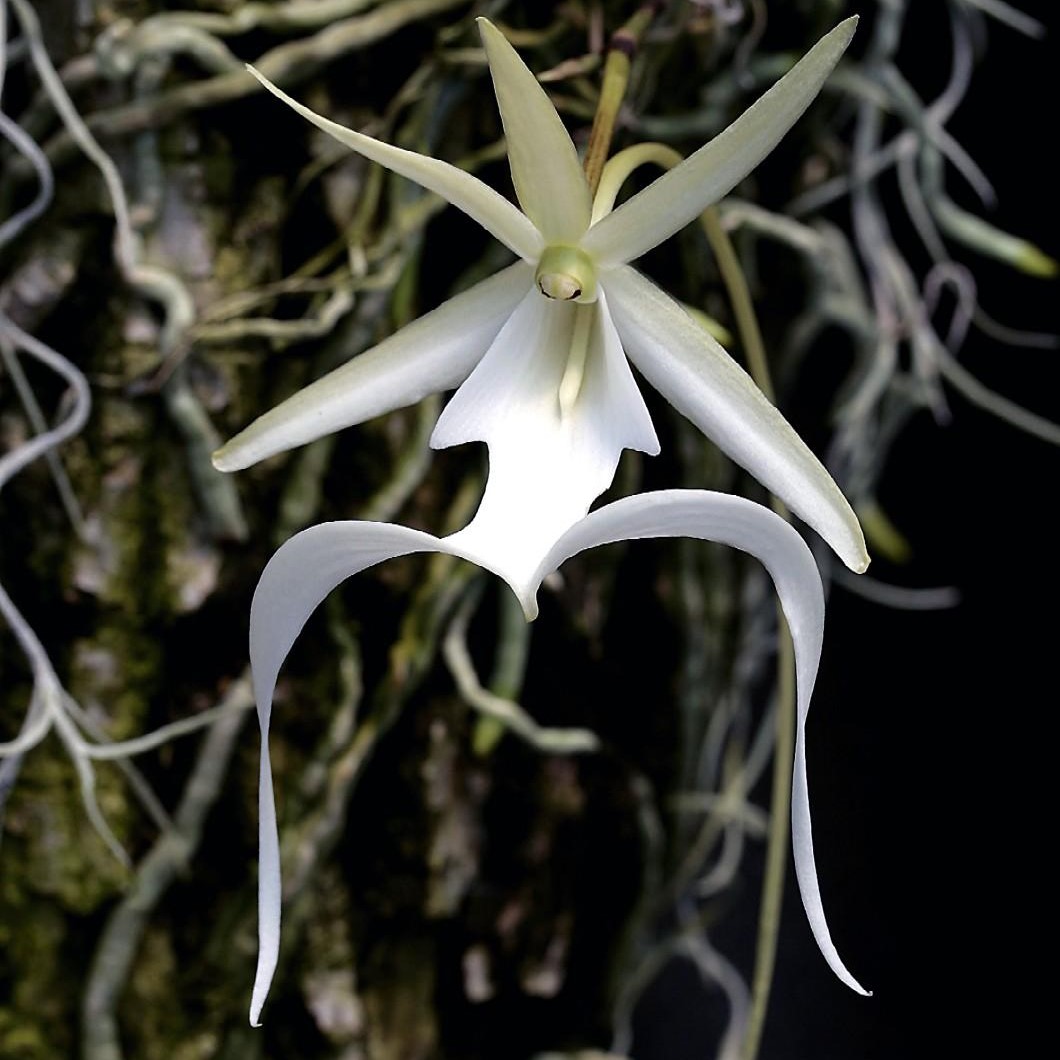 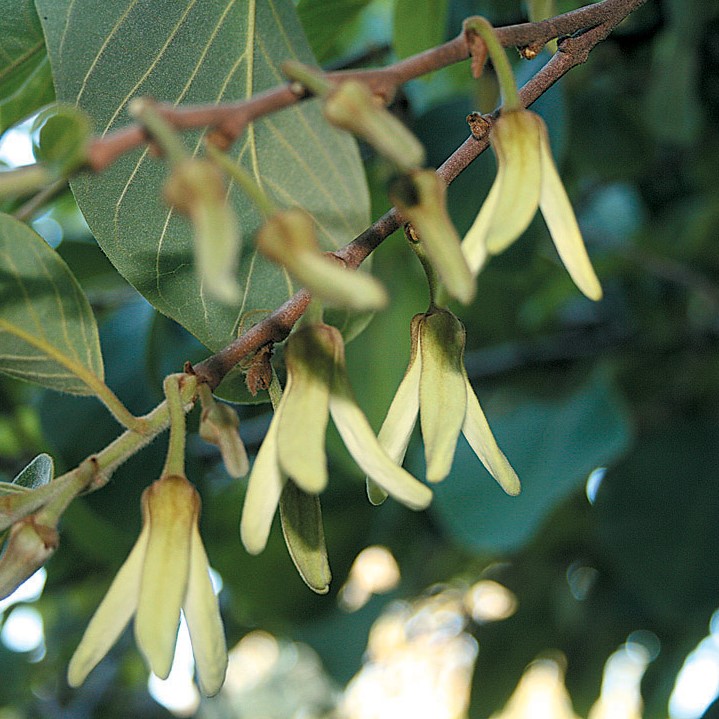 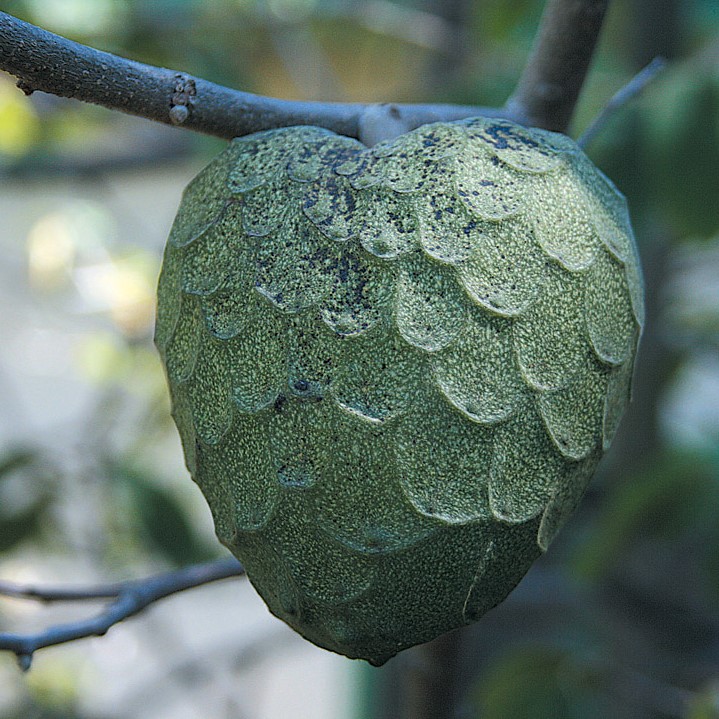 The moth was first reported in California to SBMNH by a citizen of downtown Santa Barbara in 2015. In the summer of 2016, Russell announced her project to record occurrences of the giant sphinx moth at a Santa Barbara Entomologists meeting. CCBER Collections Staff Rachel Behm noticed that the moth discussed by Russell resembled a specimen from a student collection created for UCSB's spring 2016 Terrestrial Invertebrate Zoology class and recently donated to CCBER. Behm reported the moth to Russell and got into contact with the original student collector to find the moth's original specific location. It had been found dead in a pile of leaves next to what turned out to be a cherimoya tree on Abrego Road.

Since then, Russell has made many advancements in her project. She captures moths and other night-flying insects in a black light (UV) trap, hand-rears moths from eggs, works with SBMNH Curator of Entomology Matthew Gimmel to preserve and study captured specimens, and records observations submitted by citizens. 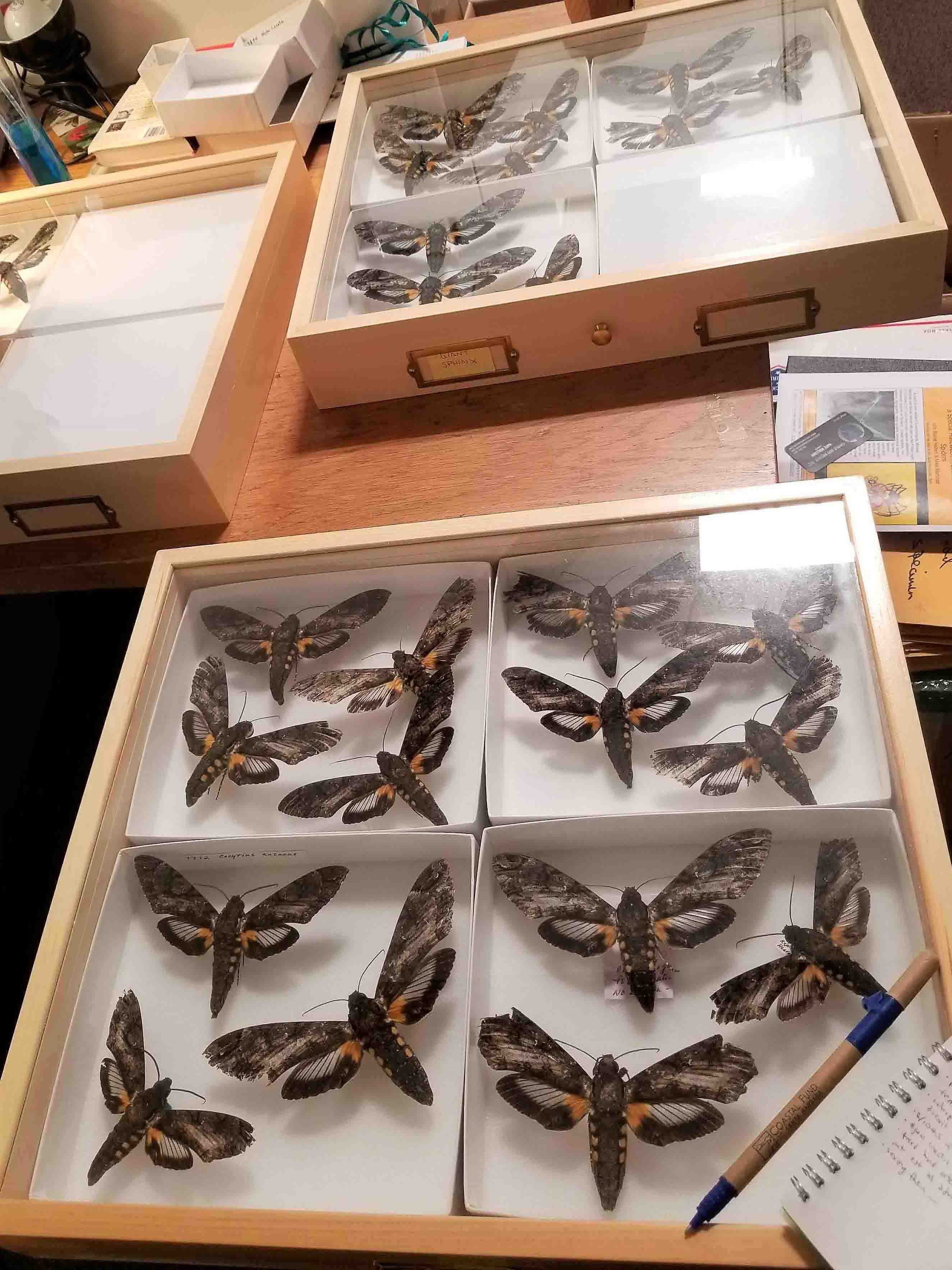 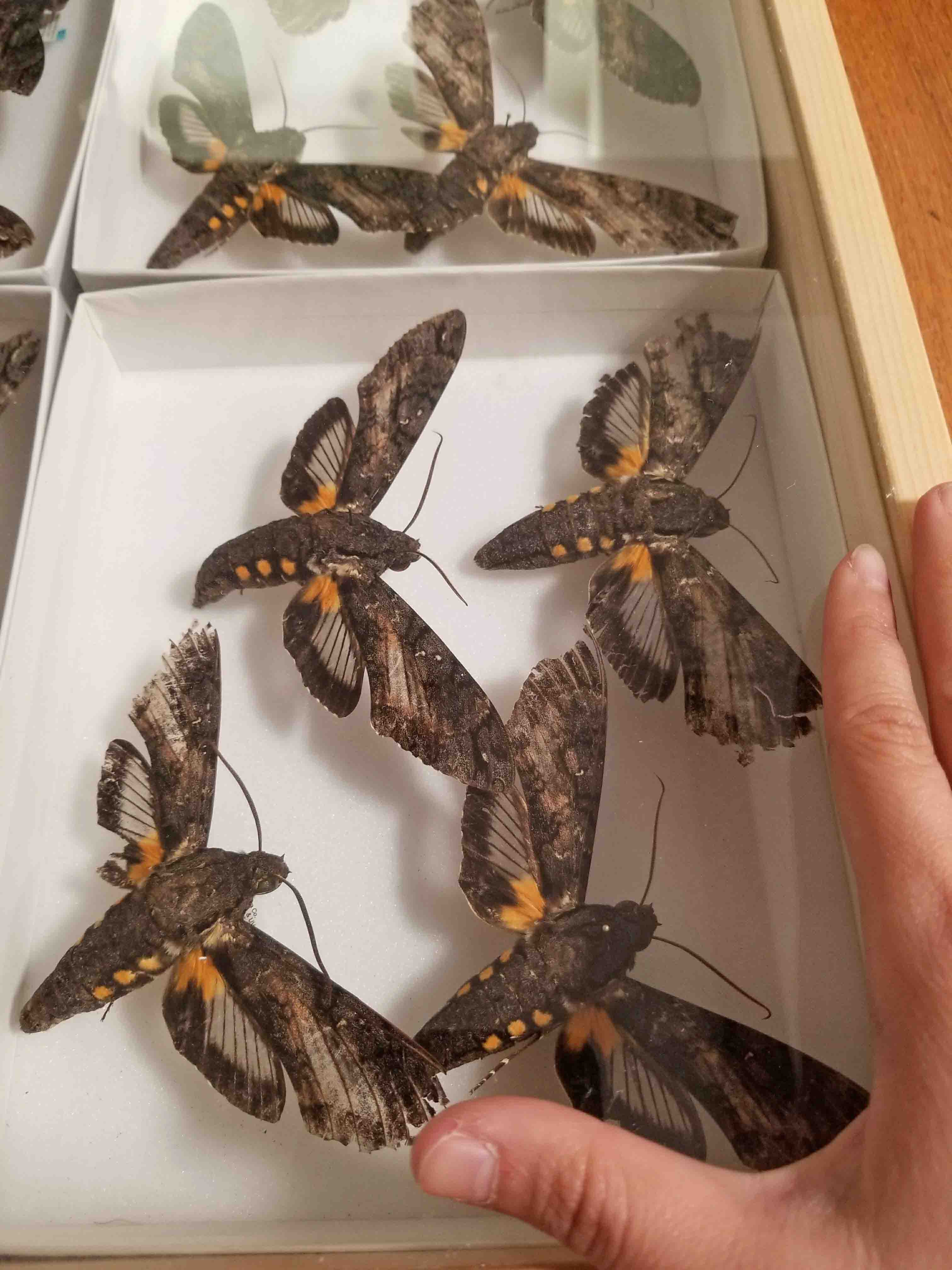 Pictures of the C. antaeus specimens in the SBMNH Entomology Collection.

Russell encourages others curious about these moths and other nocturnal insects to build their own black light traps. A simple black light trap needs a small carton with an open face, and a white kitchen garbage bag lining the inside and folded over the edge. Egg carton cups can be laid upside down inside the box, and an ultraviolet light bar placed at the top. Such traps need to be collected from, shut down, or covered before dawn to prevent predation by other animals. Russell's own black light trap has been running for 28 years, and includes a mercury vapor light to attract insects from a distance. Russell only collects a select few specimens and releases all others. 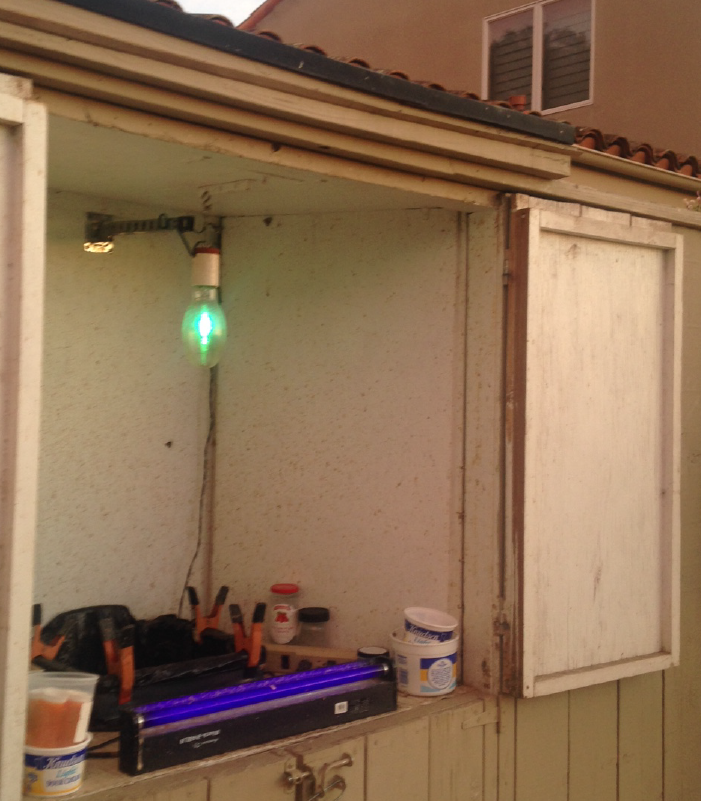 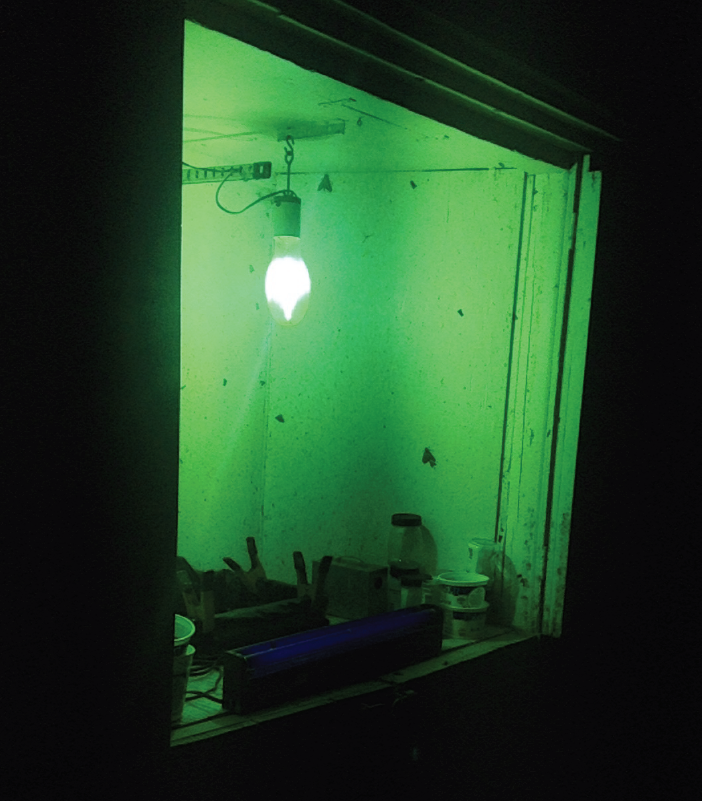 Russell is also studying to find out whether cherimoya trees are helping to spread these moths. The giant sphinx is a strong flier and has been found as an adult stray in many areas of the U.S. as far north as Chicago, and the growing popularity of the cherimoya as a backyard tree and as a commercially cultivated fruit may have offered enough mature trees to start to support a population here. This parallels the establishment of the western giant swallowtail (Papilio rumiko), which overcame physical boundaries to arrive in Santa Barbara in the same year as the sphinx moth and establish breeding on the many orange trees, also long favored for backyards and commercial groves.

Russell bought a cherimoya tree in 2017 for her own yard and has used it to attract and hand-rear C. antaeus. At least 20 eggs have been found on Russell's tree, indicating successful local breeding. 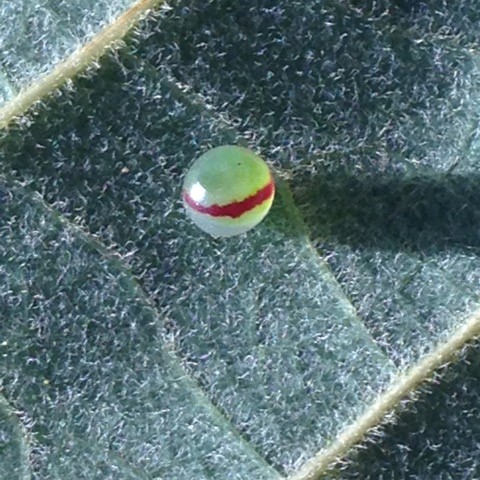 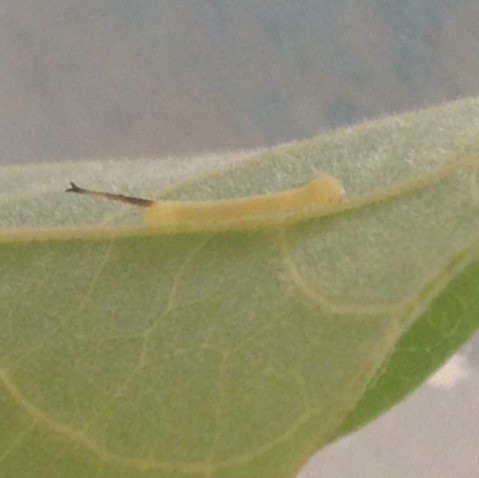 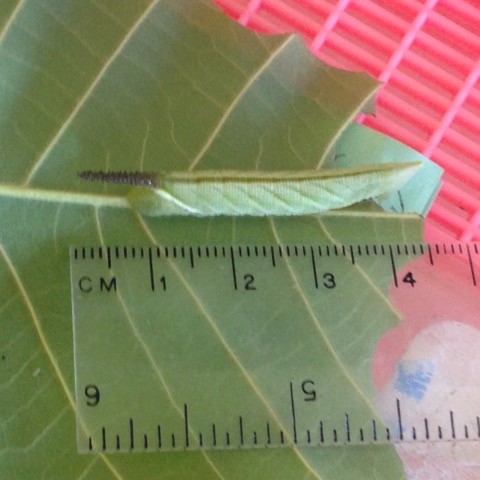 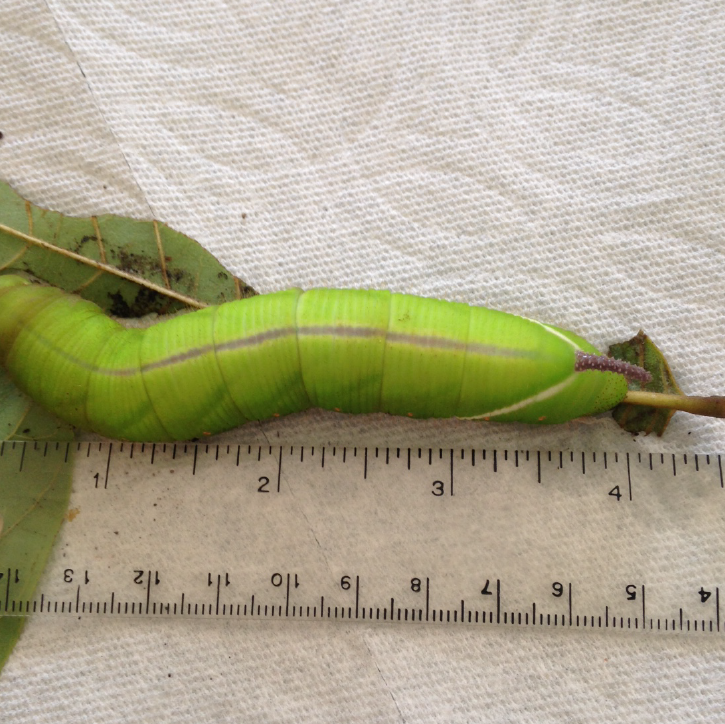 Different life stages of the C. antaeus giant sphinx moth. From left to right: Egg, new hatchling with forked "tail", third instar, and caterpillar close to pupation. Photo credit to Sandy Russell. Bottom right: Remnants of shed pupae, a deceased caterpillar, and a pupa that did not emerge, all in the SBMNH Entomology Collection. The development of the long adult proboscis is quite distinct. 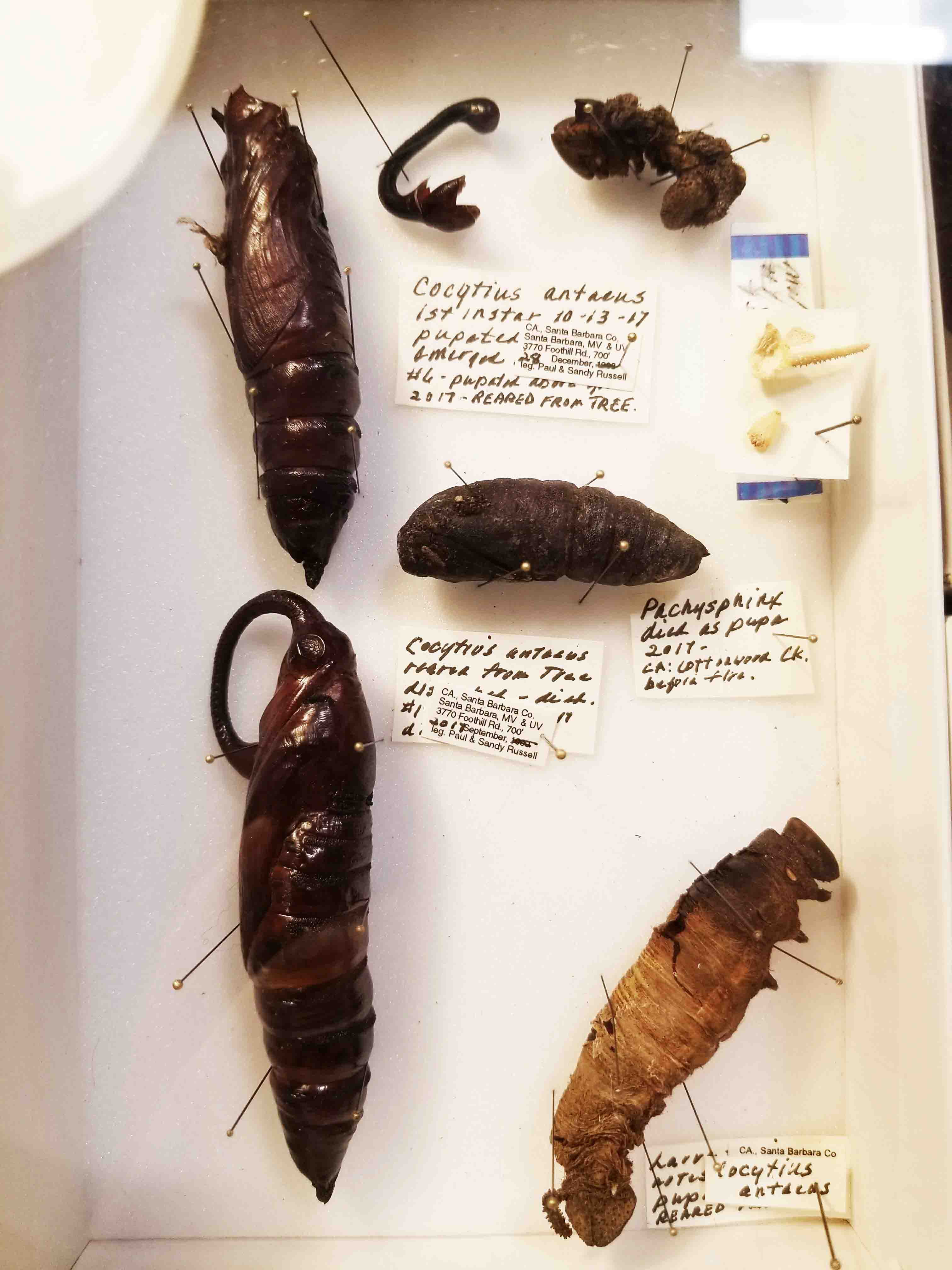 Female C. antaeus moths lay one egg at a time. The horn-"tailed" green caterpillars are well camouflaged on the underside of the leaves they eat. Being inconspicuous, they have not been reported as readily as the adults. Pupation occurs underground, and an adult emerges a few weeks or months later. Adult C. antaeus moths have an impressively long proboscis, but hand-reared and wild-caught adults have not been induced to feed in captive conditions.

California may be the northernmost instance of C. antaeus breeding. The Santa Barbara area seems to be ripe habitat with its growing cultivation of cherimoya trees. Appropriate nectar sources for adult moths have not been found, but may yet exist. Amenable climate, possible lack of predators, and other factors may play a part in establishment of C. antaeus.

With spring approaching, the Santa Barbara Museum of Natural History would like to appeal to the public to be citizen scientists and report any encounters with the giant sphinx moth, including when and where it occurred. Photos are encouraged, as well as recovered specimens, and the collector's name will become part of the specimen's label data. It may be worthwhile to stake out known cherimoya trees like the one on Abrego Road in Isla Vista. Those interested in learning more about nocturnal insects can construct a simple black light trap.

Please report occurrences of the moth to mgimmel@sbnature2.org, or malimoth@verizon.net. Many thanks to Rachel Behm for introducing me to CCBER's own giant sphinx moth specimen, and to Dr. Matthew Gimmel and Sandy Russell for their contributions to the article and their wealth of knowledge!

Follow the links below for more information on cherimoya cultivation and black light trap construction. 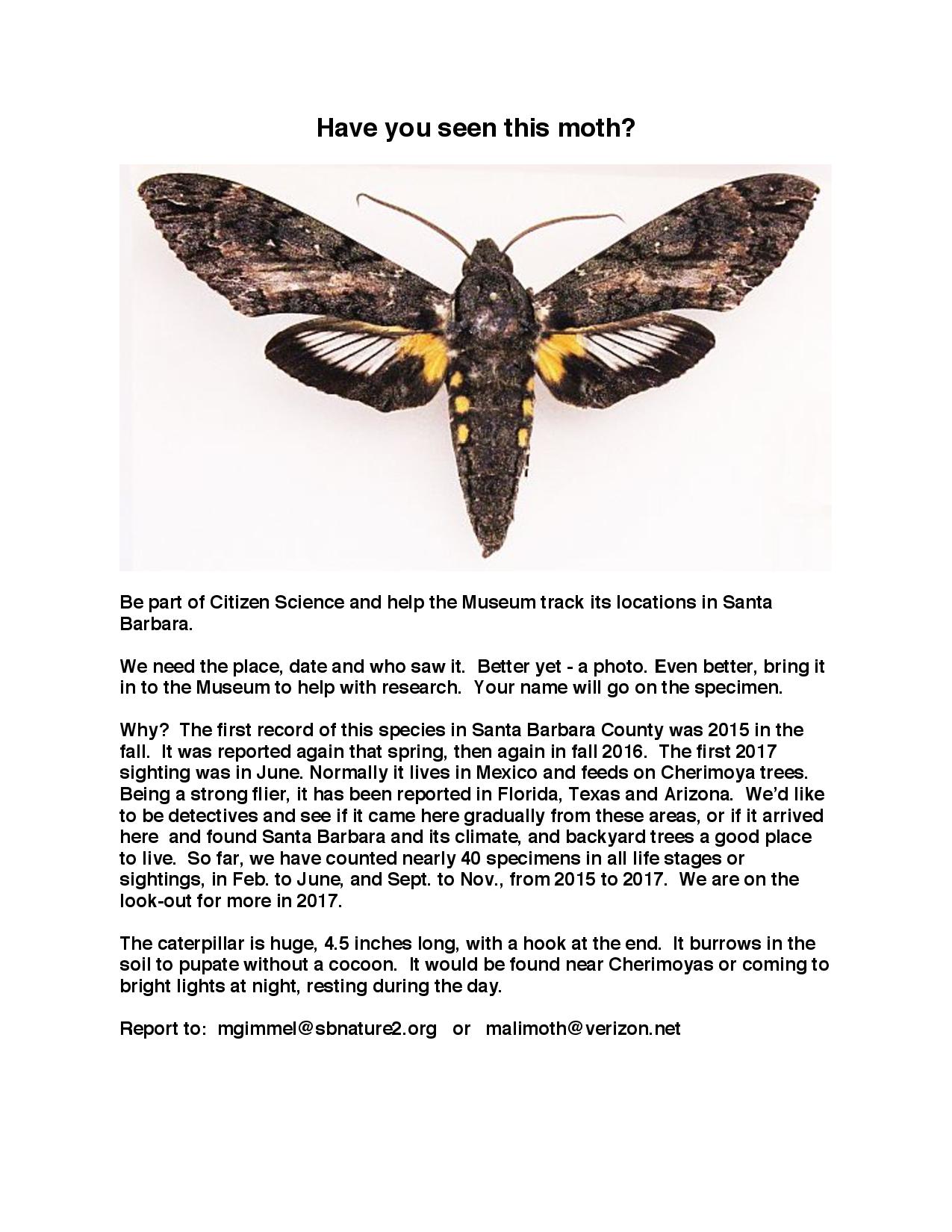