Restoration Progress on the EEM Zone of NCOS

In the 25 acres located between the North Campus Open Space (NCOS) Restoration Project and the South Parcel vernal pools is a unique zone that evolved in the aftermath of the bulldozing of the area in 1965 to scrape fill soil into the former upper arms of Devereux Slough for the creation of the Ocean Meadows golf course. That bulldozing left a series of berms and swales designed to keep runoff and sediment out of the golf course but ended up dumping extensive sediment into the lower portion of Devereux Slough. Some of the grading work exposed a region of sandy soils with a perched water table that became colonized by willows and cottonwood trees, and by the invasive Pampas grass (Cortaderia jubata). Other regions of the area with clay soils became dominated by Fennel (Foeniculum vulgare), Mustard (Brassica nigra) and Harding grass (Phalaris aquatica), all of which established dense, low diversity weed patches. As the NCOS project got underway, we were concerned that these 25 acres of invasive weeds could easily colonize the newly restored site. To help control these weeds, we were fortunate to secure a grant funded by California Transportation Commission and managed by the California Natural Resources Agency called an Environmental Enhancement and Mitigation Program grant (EEM). Hence, we informally call this region the EEM portion of the greater North Campus Open Space. Now in its third year of implementation, the efforts to control the inhospitable weeds have created openings for natural and planted restoration, which are highlighted here in a report by Beau Tindall, CCBER’s project leader at the EEM and South Parcel sites.

Map showing the six main zones or regions of NCOS, including the EEM region to the west, between NCOS and South Parcel.

In 2018, twenty-two tons of Pampas grass, an invasive species from South America, was removed from the site. This was mostly done using an excavator, but in the swales where it was not feasible, many hours were spent digging up individual plants. As you can see from the pictures below, simply removing the Pampas grass allowed for a natural population of Spike rush (Eleocharis macrostachya) to flourish as well as for water to pond during the wet season. Removing the Pampas grass also provided us with the opportunity to plant a trial population of the endangered Ventura marsh milkvetch (Astragalus pycnostachyus var. lanosissimus). 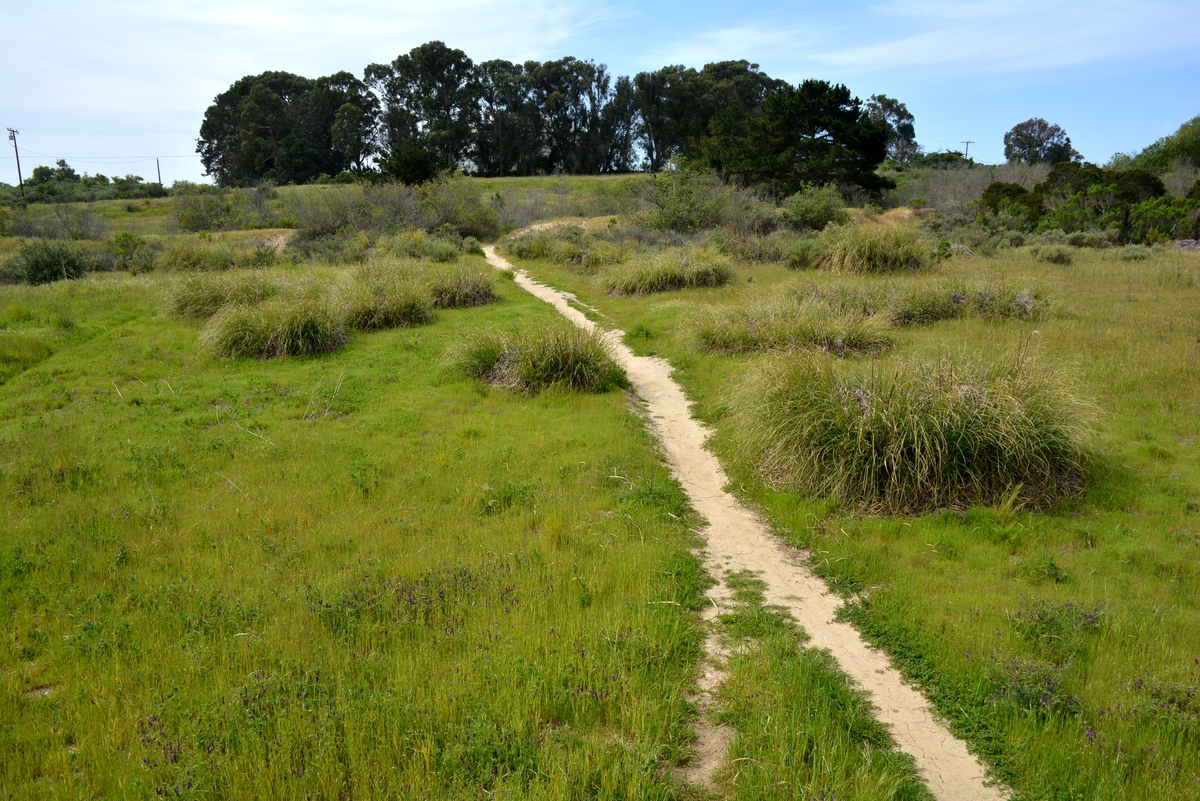 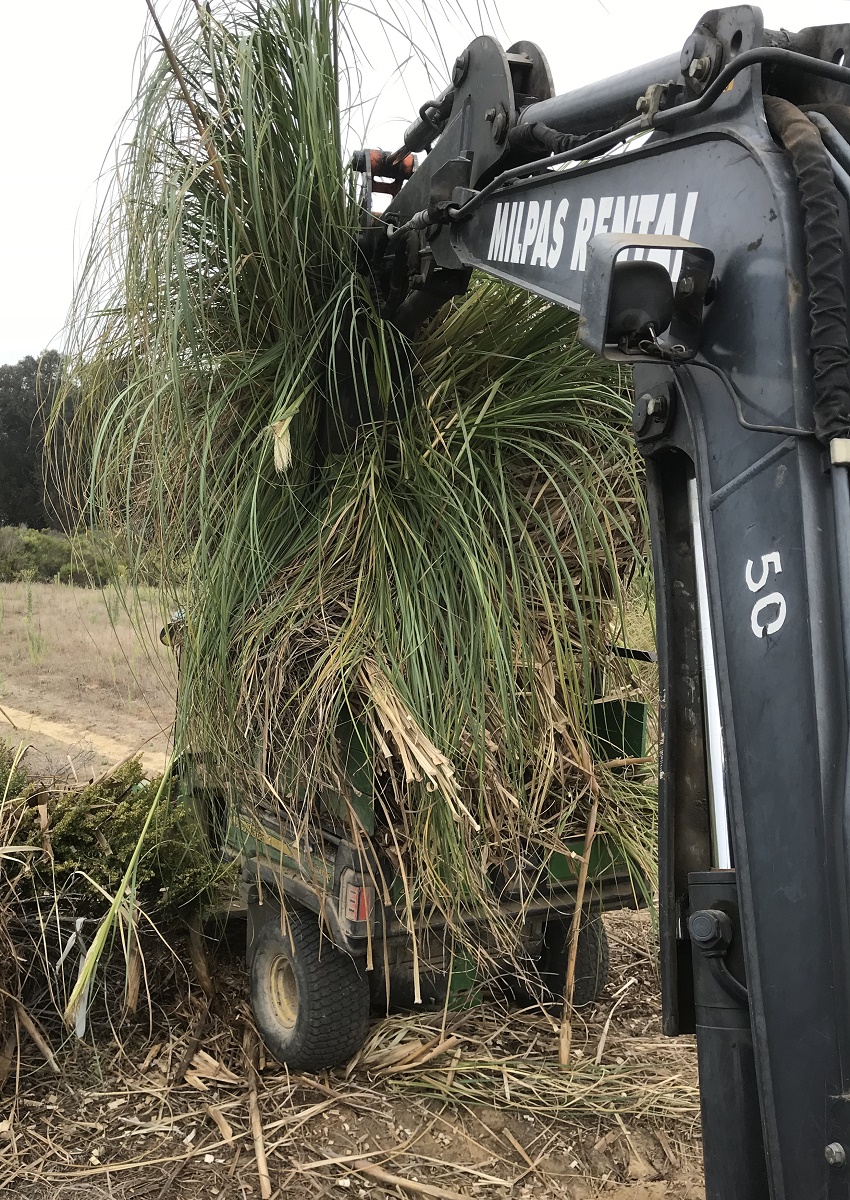 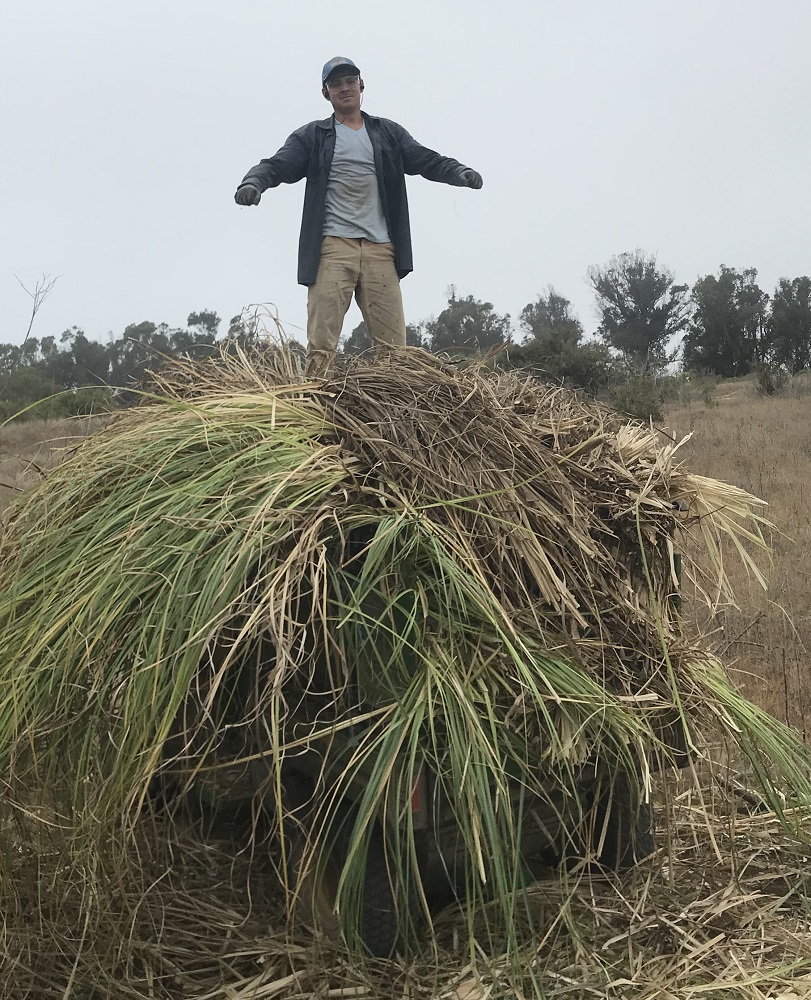 Removal of Pampas grass at the EEM site using an excavator. 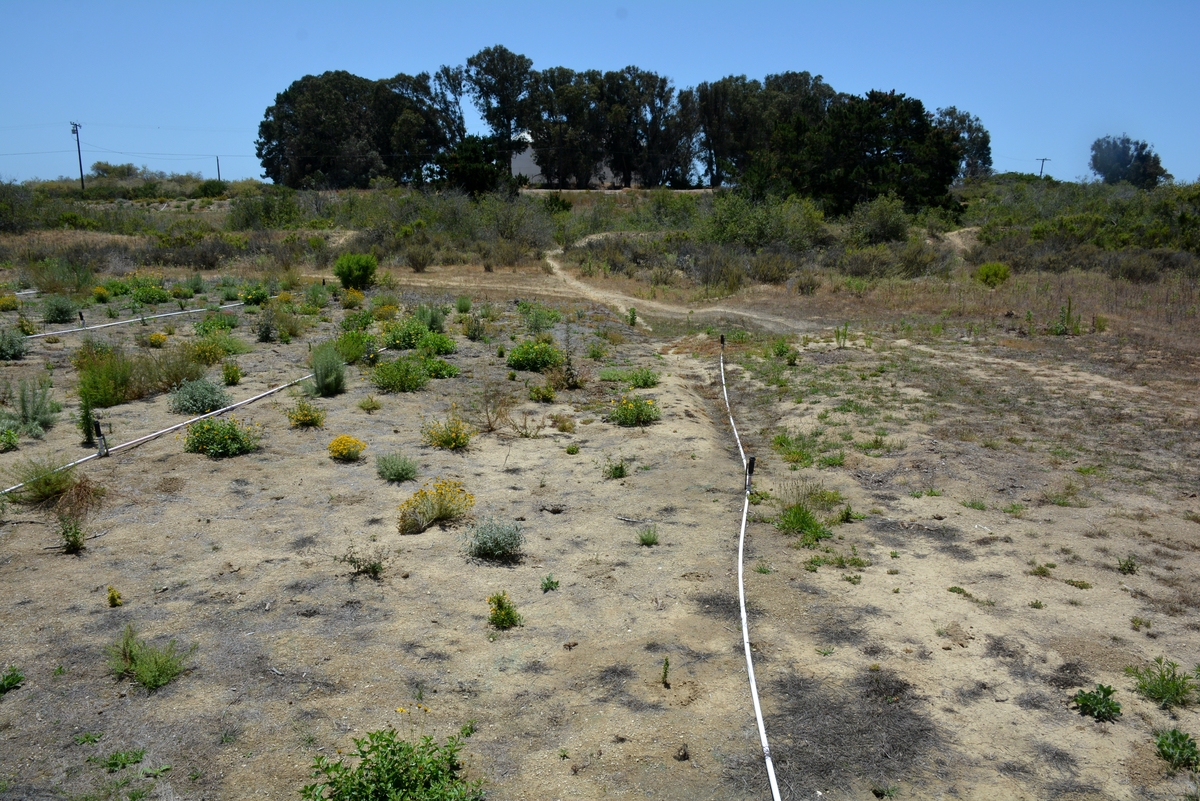 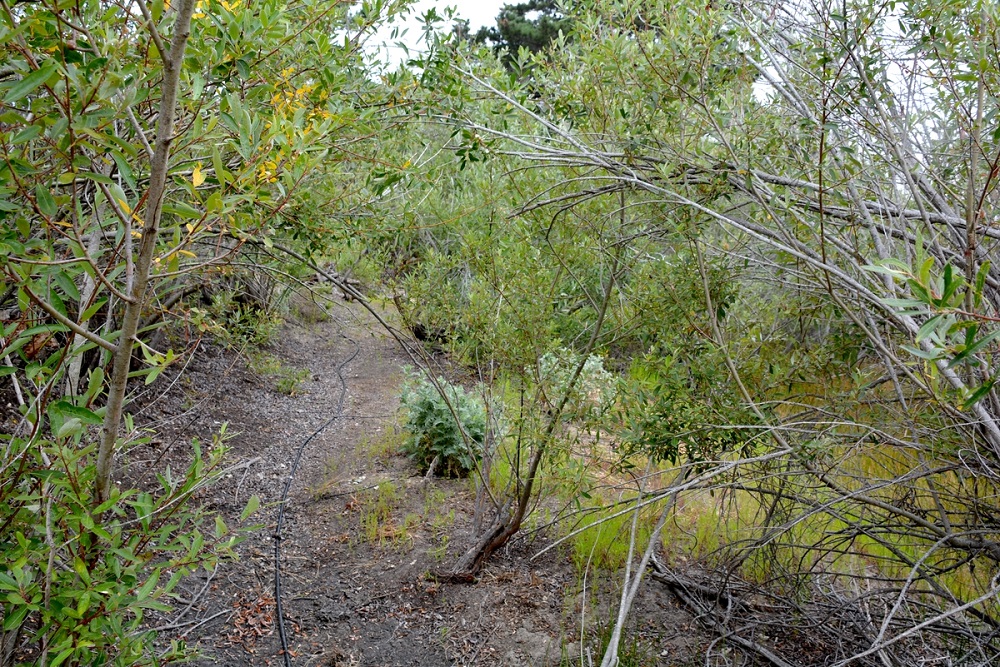 This photo shows Spike rush growing in a swale beneath the willows (lower right) where Pampas grass was removed in 2018-2019.

More than three acres of the site was dominated by an annual non-native mustard (Brassica nigra), which has proven to be quite a challenge to completely remove because of its long-lived seed that can persist in the soil and germinate for years. To combat this, we have spent two full growing seasons assuring that no mustards went to seed either with mowing or solarization. As you can see in the following pictures, it was a solid carpet of mustard prior to being solarized. This plan works well until you plant native plants, and then that’s when hand weeding and some small use of herbicide comes into play. We have successfully begun the process of transforming this section of EEM from a non-native dominated area to a beautiful patch of flowering coastal sage scrub species. 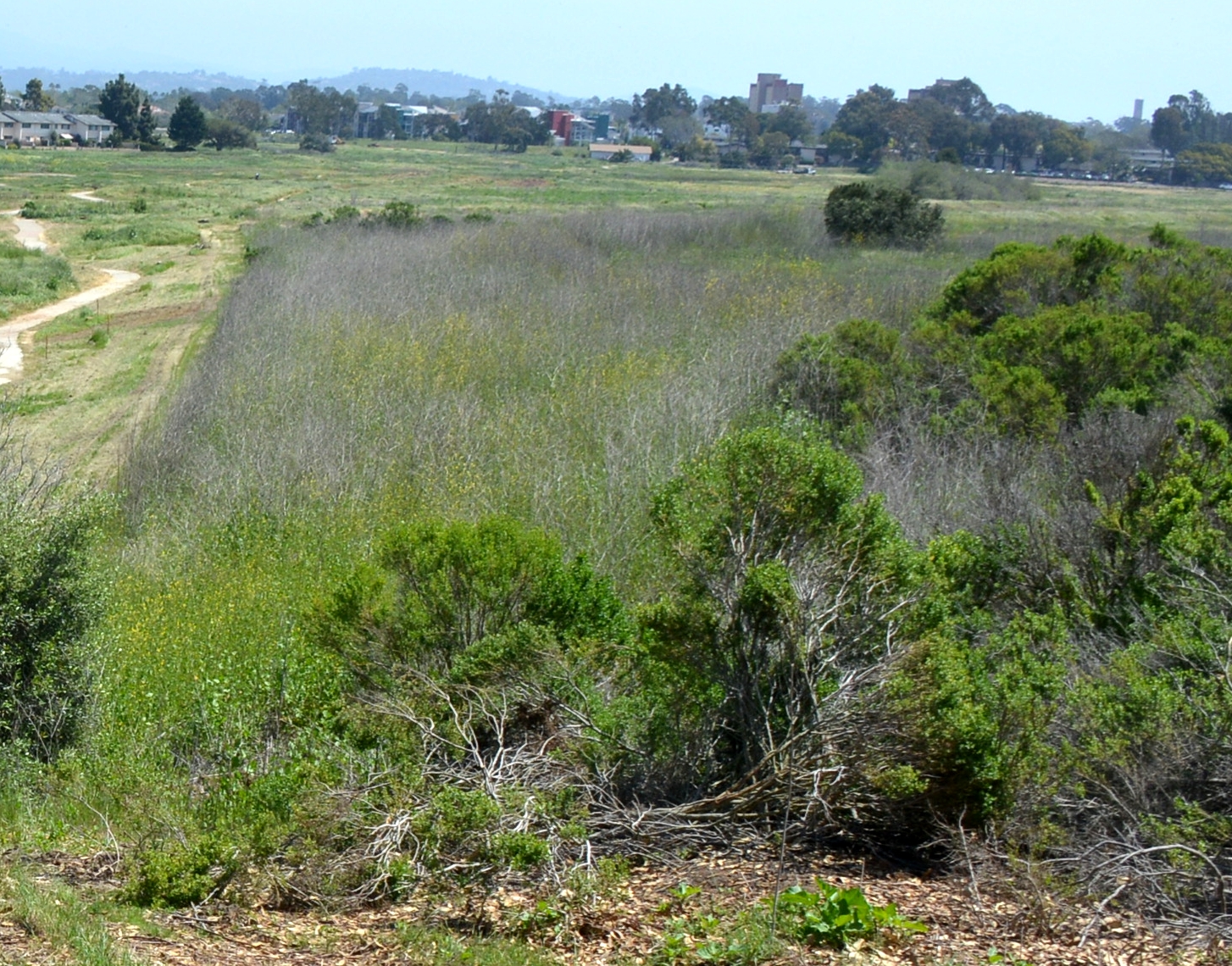 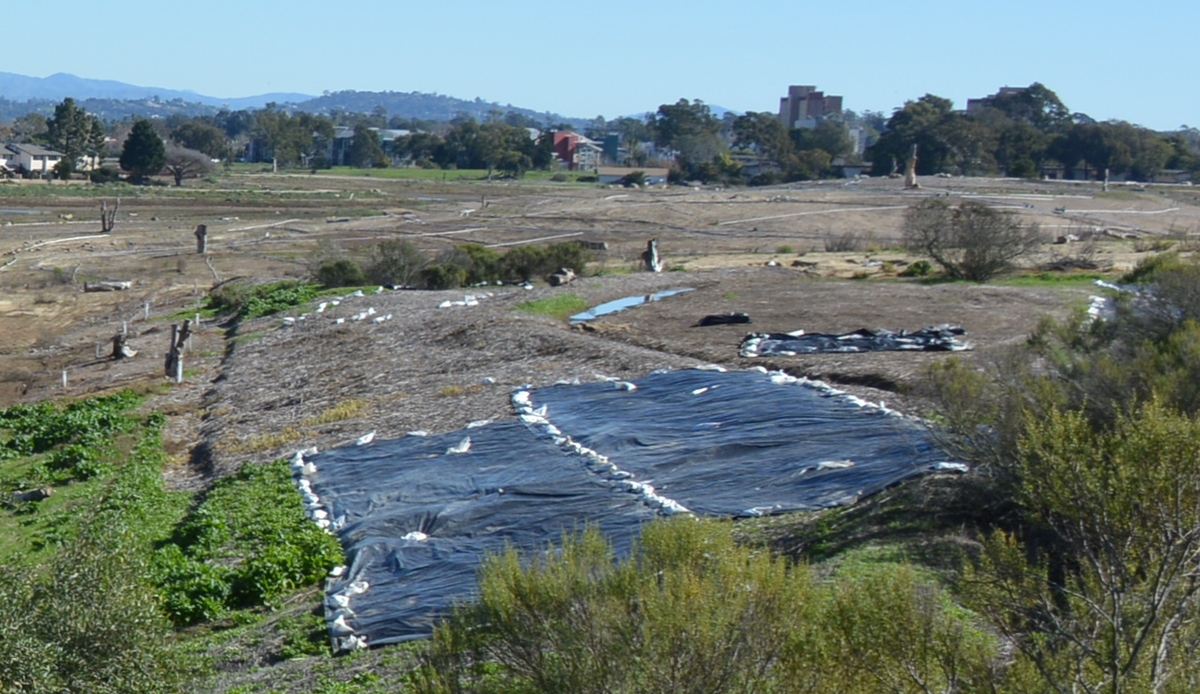 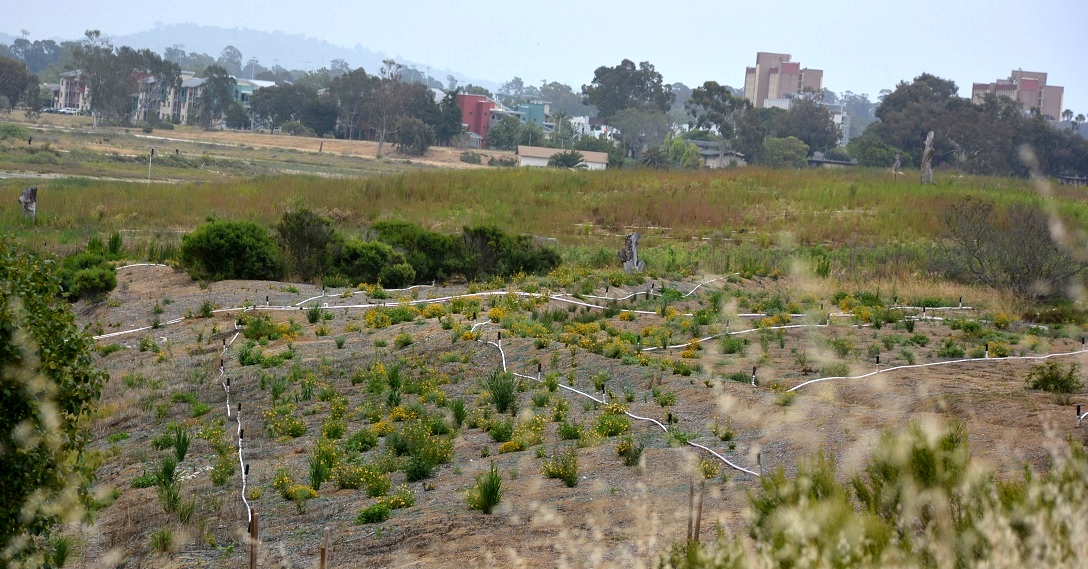 The other multi-acre zone that we have spent a lot of effort on was primarily dominated by two challenging invasive plants, Fennel and Harding grass. This area was also treated for two years with solarization and is now a beautiful flowering coastal sage scrub habitat. 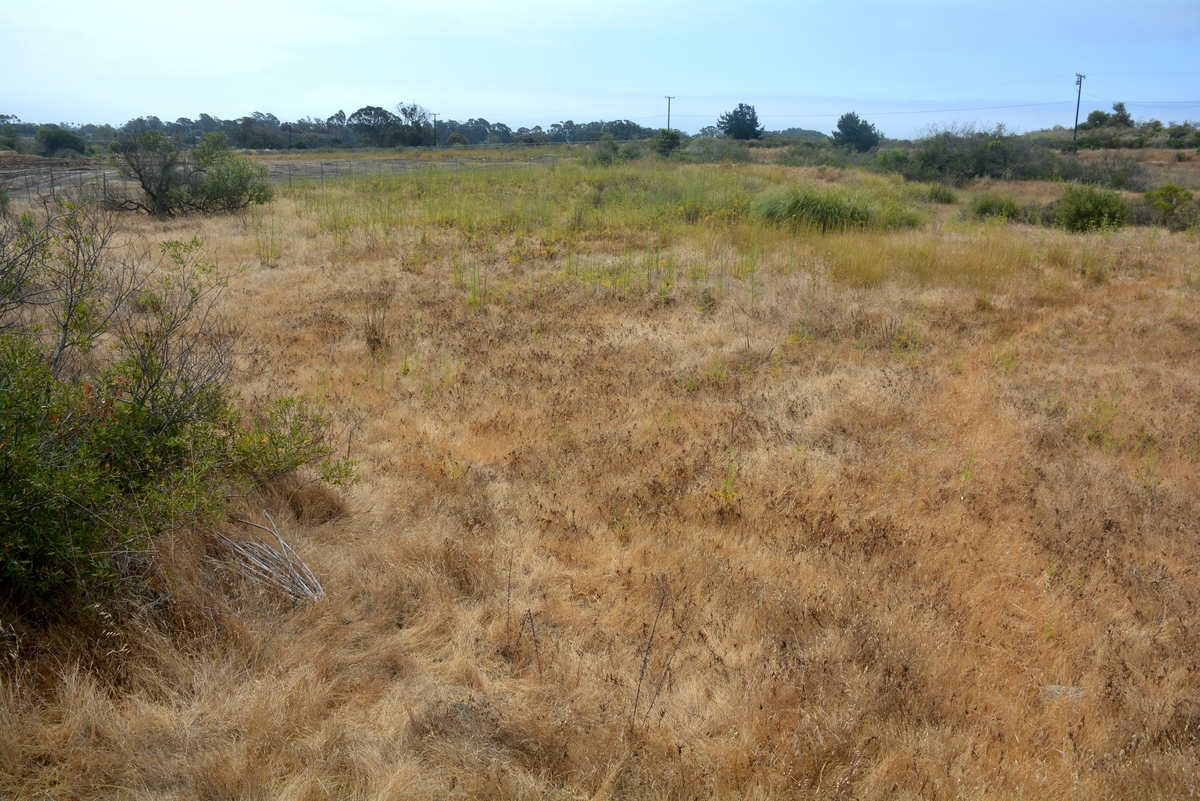 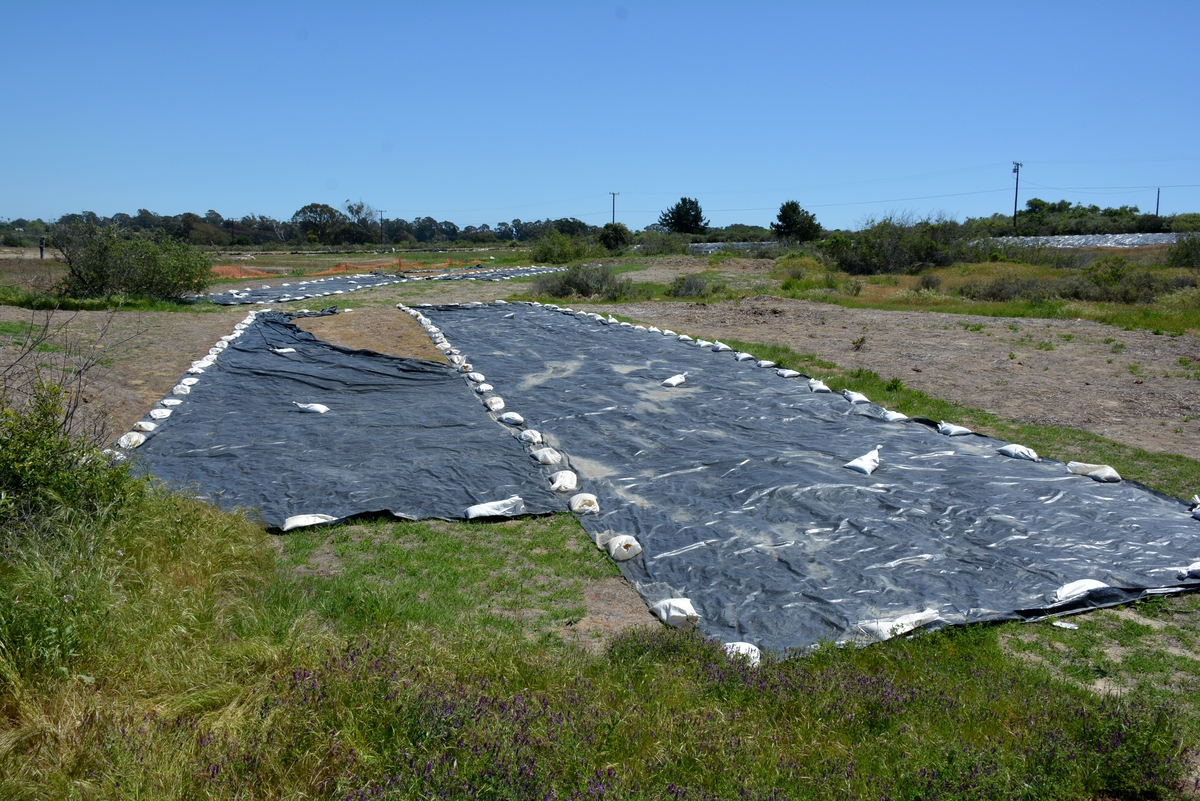 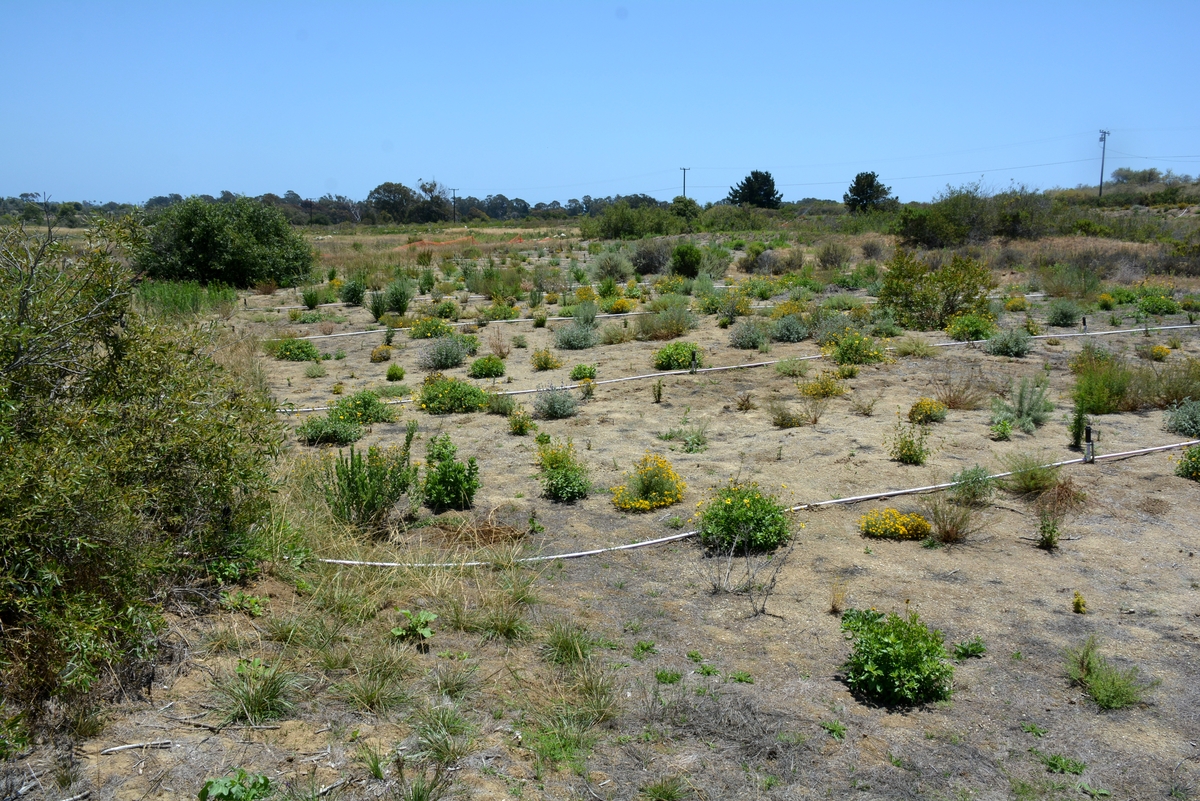 The last section of EEM that is the process of being restored is a trail that ran directly through the last remnants of the original, pre-golf course salt marsh along the Eucalyptus windrow. With this trail now closed off and replanted, we have a much higher likelihood of seeing Belding’s Savannah Sparrow nesting in this habitat because of the enhanced connectivity to the larger restored salt marsh on NCOS. 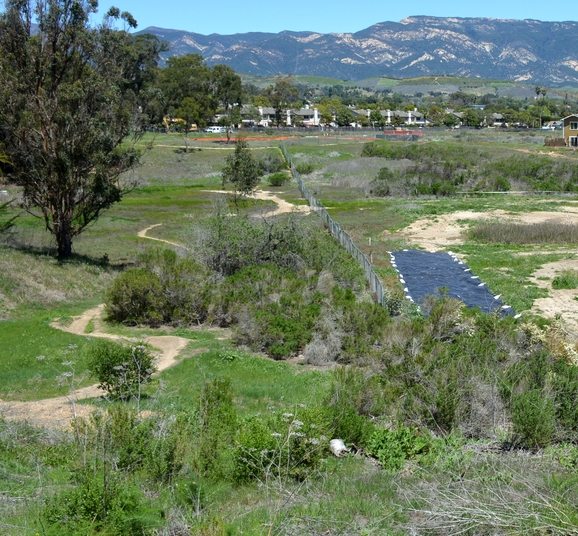 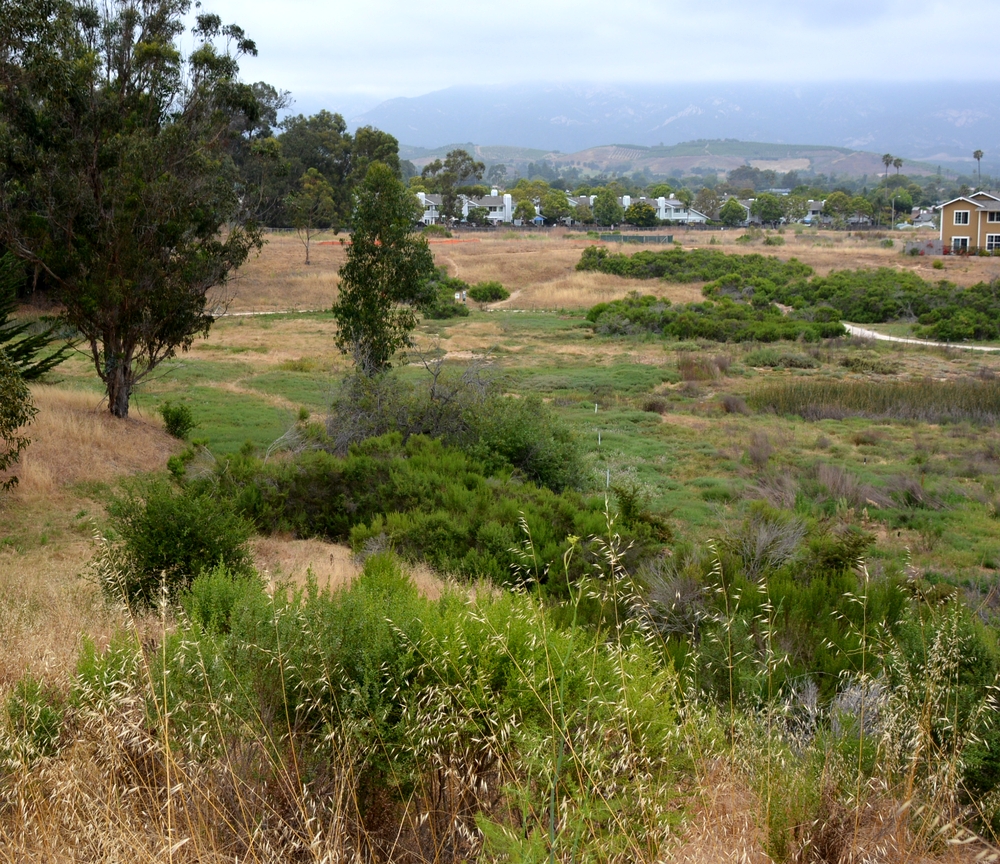 Two views of the informal trail through the remnant saltmarsh area of EEM: (Left) - photo from April 2017 prior to fencing of the area, (Right) - photo from July 2020 showing regrowth of vegetation covering much of the old trail.

As you begin to explore the EEM site, which we highly encourage you to do, you will discover that it contains a lot of unique aspects. The area has unusually fine sandy soils, a perched water table supporting water loving plants such as willows and cottonwoods, and a wide diversity of smaller annual flowering plants such as Sand pygmyweed (Crassula connata), Miniature lupine (Lupinus bicolor), and Cleveland's cryptantha (Cryptantha clevelandii). We encourage you to enjoy this nature experience while being respectful to these small plants. This is a wonderful place for kids and adults to play in nature on foot, but if you have a dog please keep it on a leash so that quail, bobcats and children can enjoy the area safely.