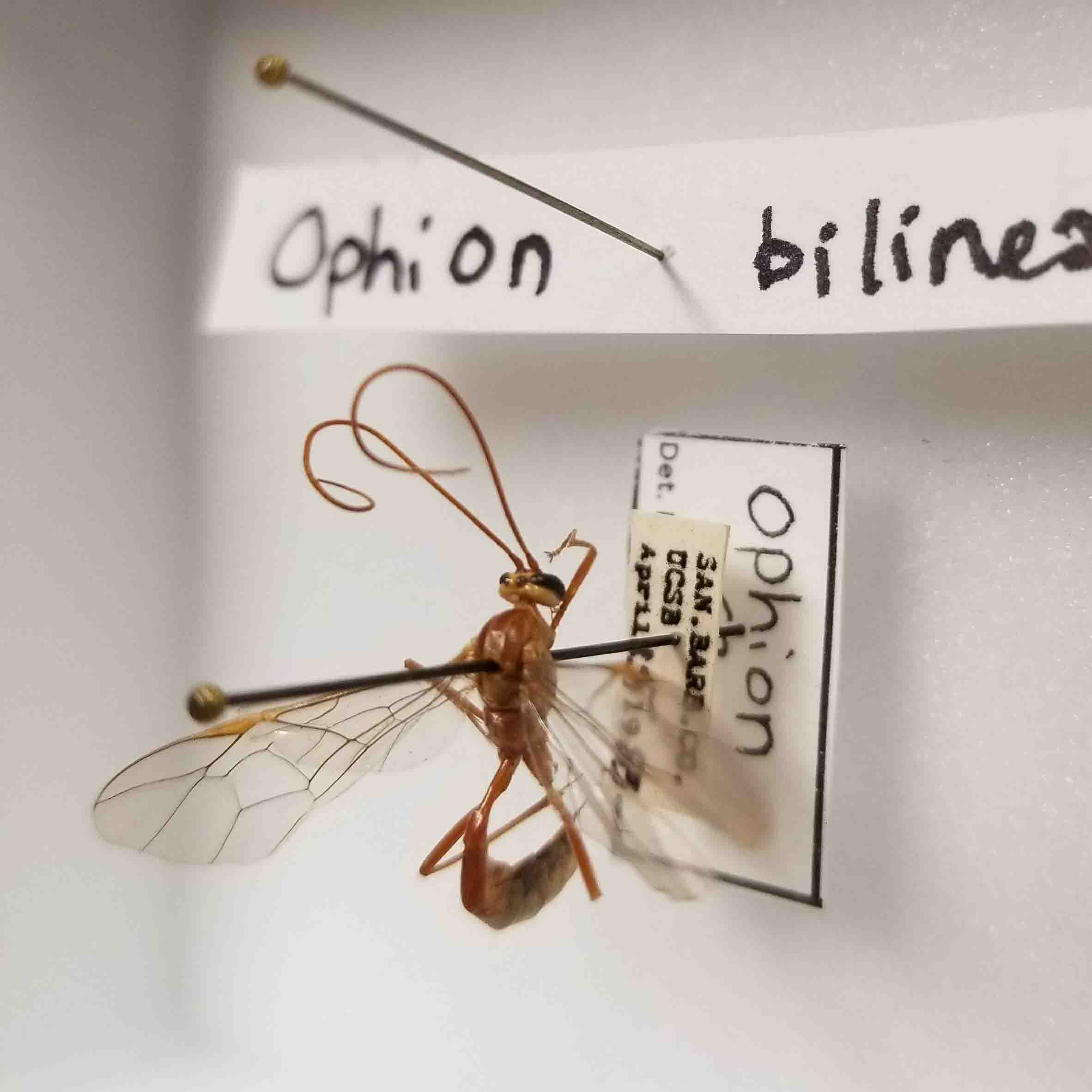 Ophioninae are a subfamily of wasps in the family Ichneumonidae, which is itself in the order Hymenoptera (wasps, bees and ants). They are large wasps that are harmless to humans, though the females may give a poke with their ovipositor if they feel threatened. Like other Ichneumonids, Ophionines are parasitoid wasps. They lay their eggs inside the body of other arthropods, most commonly large caterpillars from the Sphingidae, Noctuidae, and Saturniidae moth families in the order Lepidoptera. These wasps are important ecologically, as parasitoids act as biocontrol for agricultural pests such as the fall armyworm (Spodoptera frugiperda), which can severely impact corn crops.

Little is known about the diversity of the Ophionines in California. While there has been much research done on the wasps in the tropical regions, temperate regions such as the Western United States are sorely understudied. Part of the Master's project of CCBER Collections Staff Rachel Behm is to study the diversity of Ophioninae wasps that occur from San Diego to Point Conception by collecting new specimens and looking at historical collections. She wishes to examine these wasps locally to document small-scale diversity and see how well it can be used to statistically extrapolate large-scale or future diversity. She is also doing a project under UCSB professor Dr. Hillary Young, documenting how the diversity of flies (order Diptera) varies among islands with different ecological properties in the Palmyra Atoll. 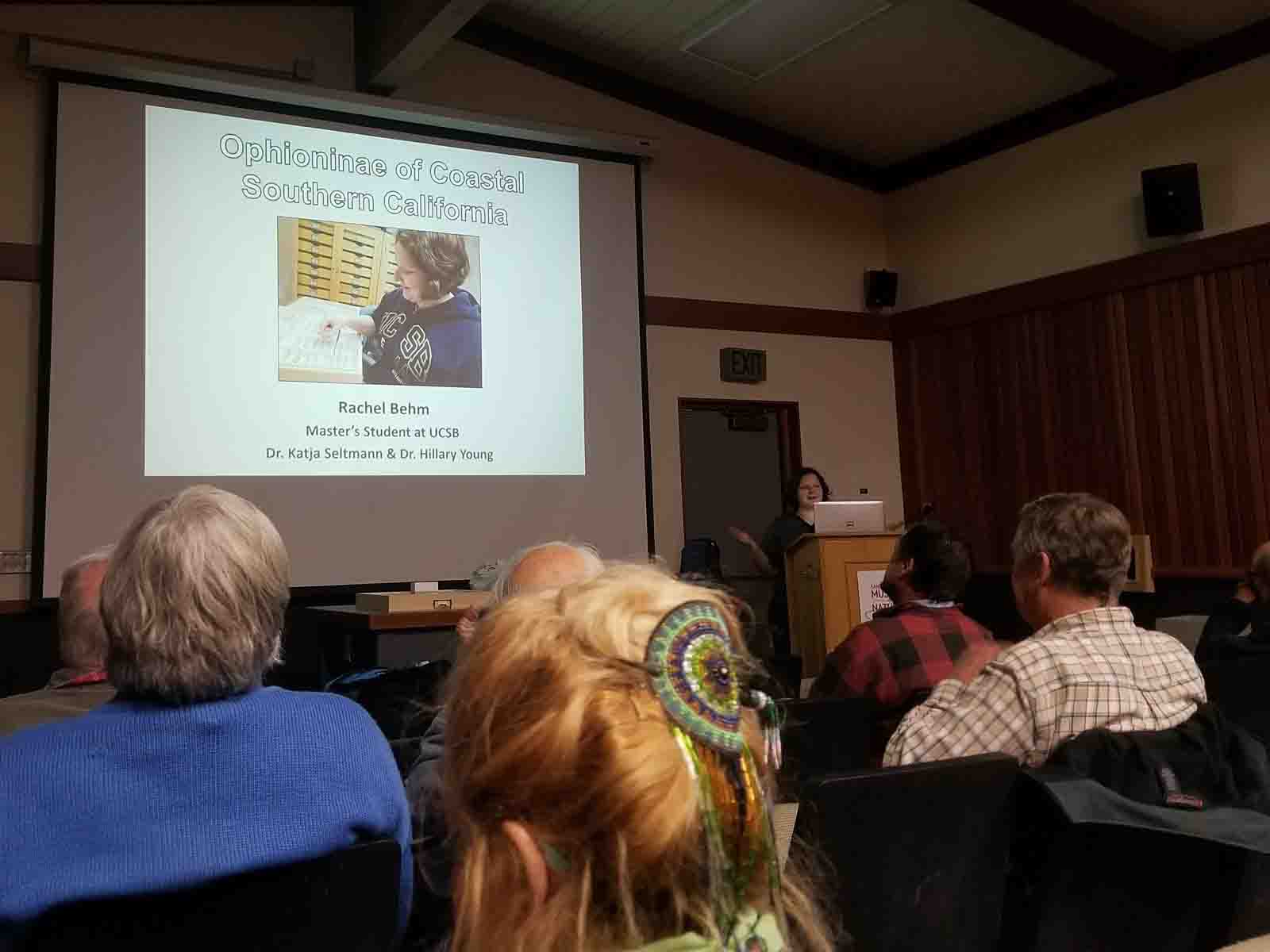 Ophionines are mostly nocturnal and are attracted by lights, but some are diurnal or crepuscular, being active at dawn and dusk. Nocturnal Ophionines are pale, while diurnal Ophionines are flashy and boldly colored in mimicry of tarantula hawk wasps (family Pompelidae) to avoid predation. Ophionines form a distinct subfamily that share the qualities of a laterally flattened abdomen, a "horse head"-shaped cell in the wing with an adventitious vein, and large and prominent ocelli (eyes). There are many cryptic species and species complexes which can make it hard to distinguish species. Identification is further complicated by the presence of an imposter wasp, the genus Netelia of the subfamily Tryphioninae, which is also an Ichneumonid. They can be distinguished by the presence of a longer ovipositor, an extra wing vein called the areolet on the tip of the "horse head" vein formation, and a darkened face where the ocelli are located. 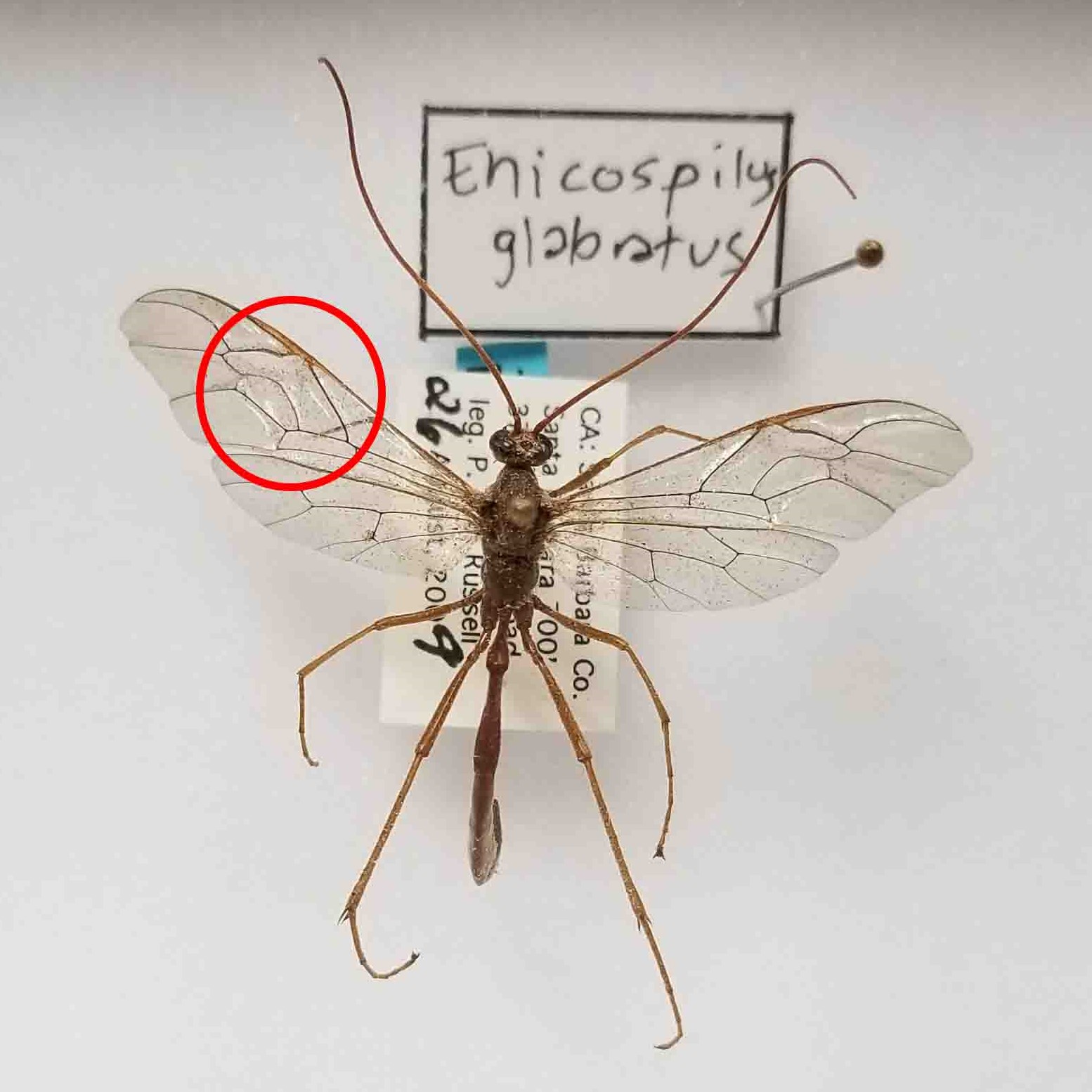 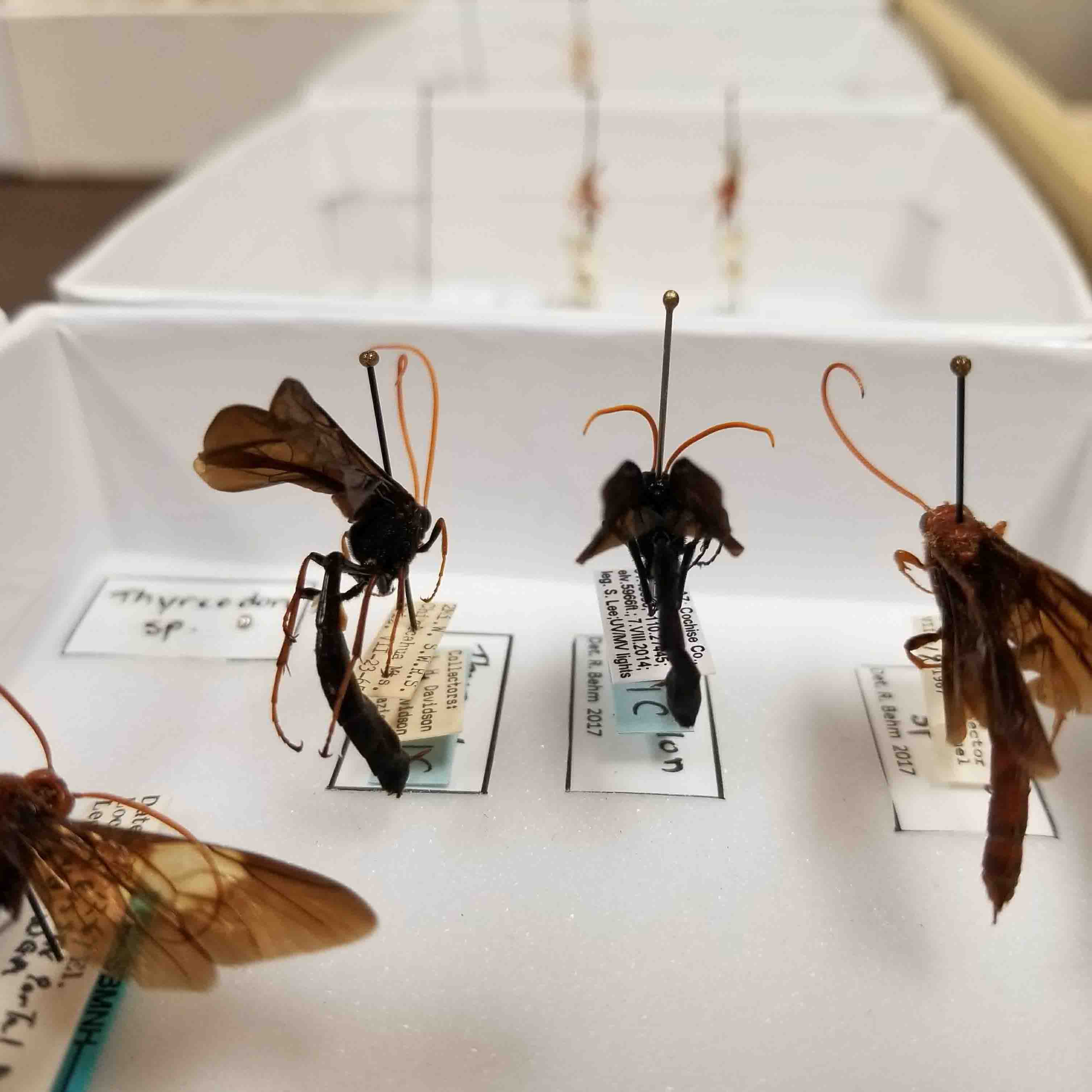 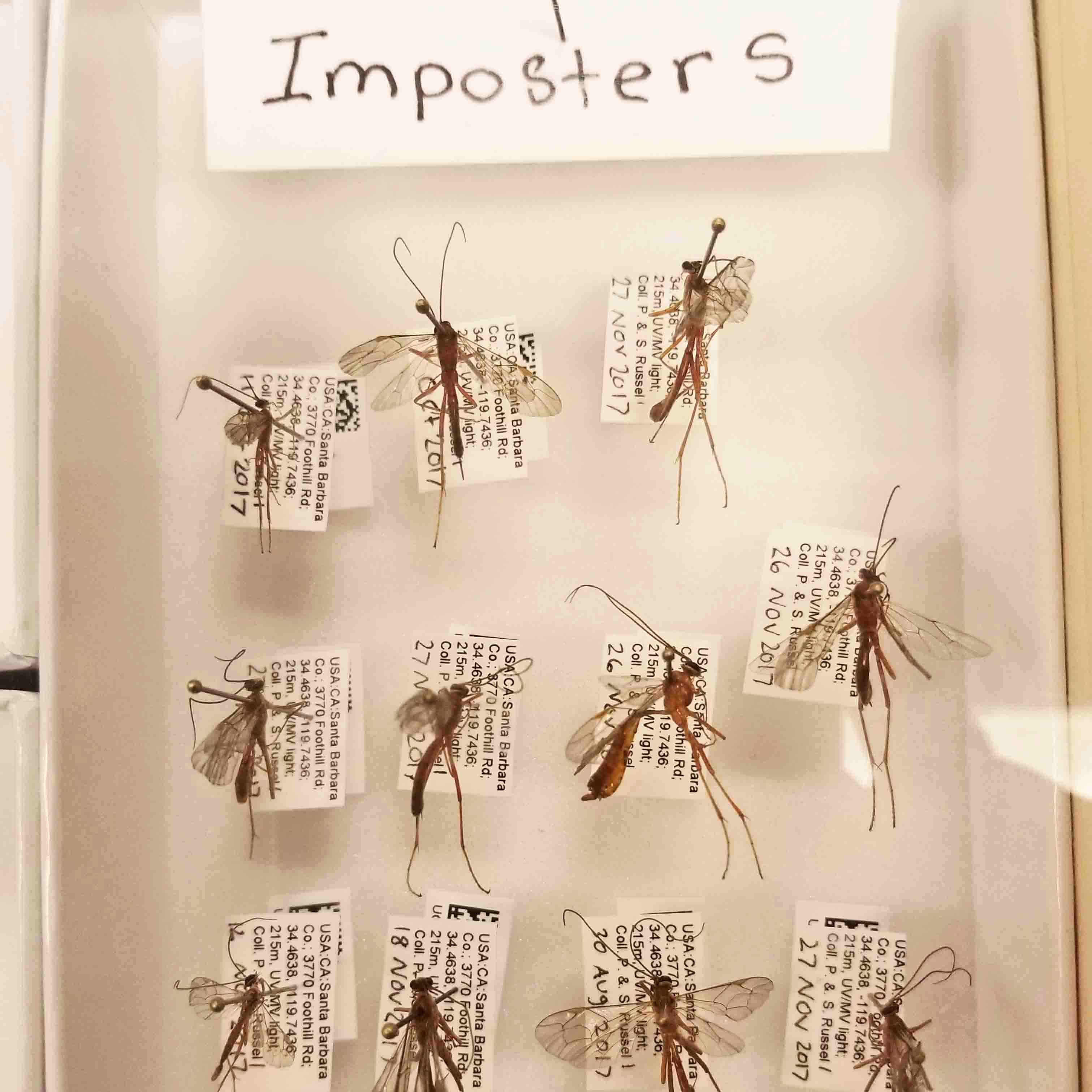 Some of CCBER's Ophioninae specimens. Left to right: An Enicospilus wasp with the "horse head" veins on one forewing circled; diurnal genus Thyreodon with colorful mimicry; very similar Ophioninae imposters.

There are 33 genera of Ophionine wasps worldwide, and a total of 1025 described species. 48 species are found in the Nearctic region of North America and Greenland, and they are well studied in Canada, the East Coast, Mexico, and Hawaii (Gauld & Wahl, 2002). According the the website Taxapad, there have been 5 genera confirmed in California: Enicospilus, Ophion, Eremotylus, Simophion, and Trophophion. Enicospilus and Ophion are the most abundant and diverse groups, Eremotylus is less common, and the other 2 genera are somewhat rare.

This current record of diversity has been discovered through identification of Ophionines trapped locally, collected historically, or acquired from local survey projects, such as CCBER's North Campus Open Space Arthropod Survey that was conducted spring and summer 2016. Aside from the wasps in the UCSB Natural History Collections, Behm receives specimens from the Santa Barbara Museum of Natural History and the Museum's blacklight trapping, and has requested specimens from other museums such as the California Academy of Sciences and the Essig Museum of Entomology, UC Berkeley that have specimens from the study area. Behm is accepting Ophionine specimens from donated personal collections as well. 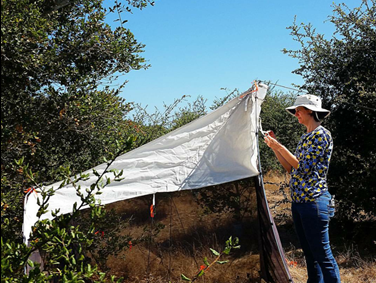 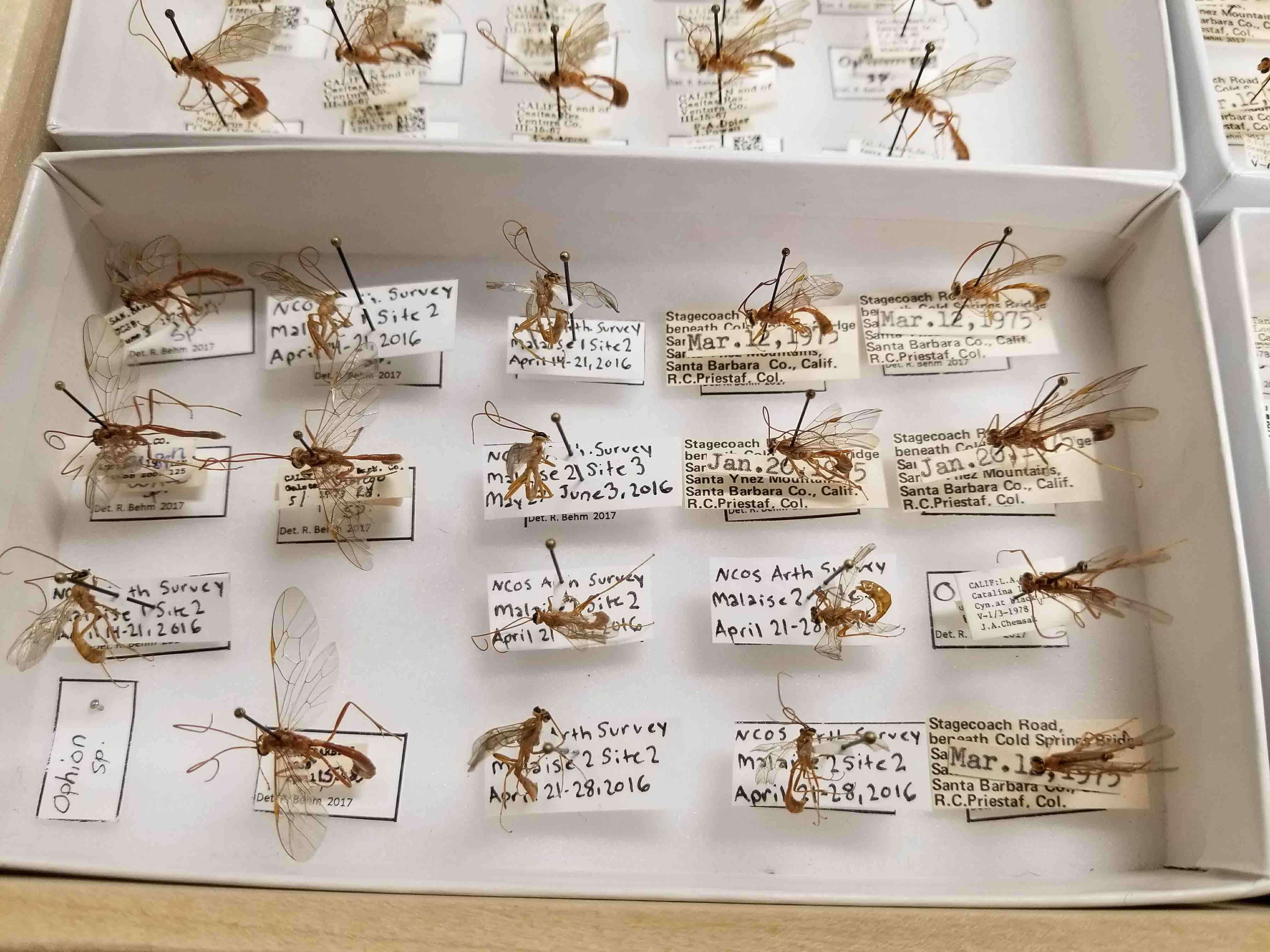 There are also several occurrences of Ophionines submitted to BugGuide, an online arthropod database with submissions and identifications akin to iNaturalist, where experts identify photos taken by people from all skill ranges. However, Ophionines on BugGuide are usually not identified to genus or species besides one common, easily recognizable species, Enicospilus purgatus. iNaturalist itself has little to no Ophionines documented. 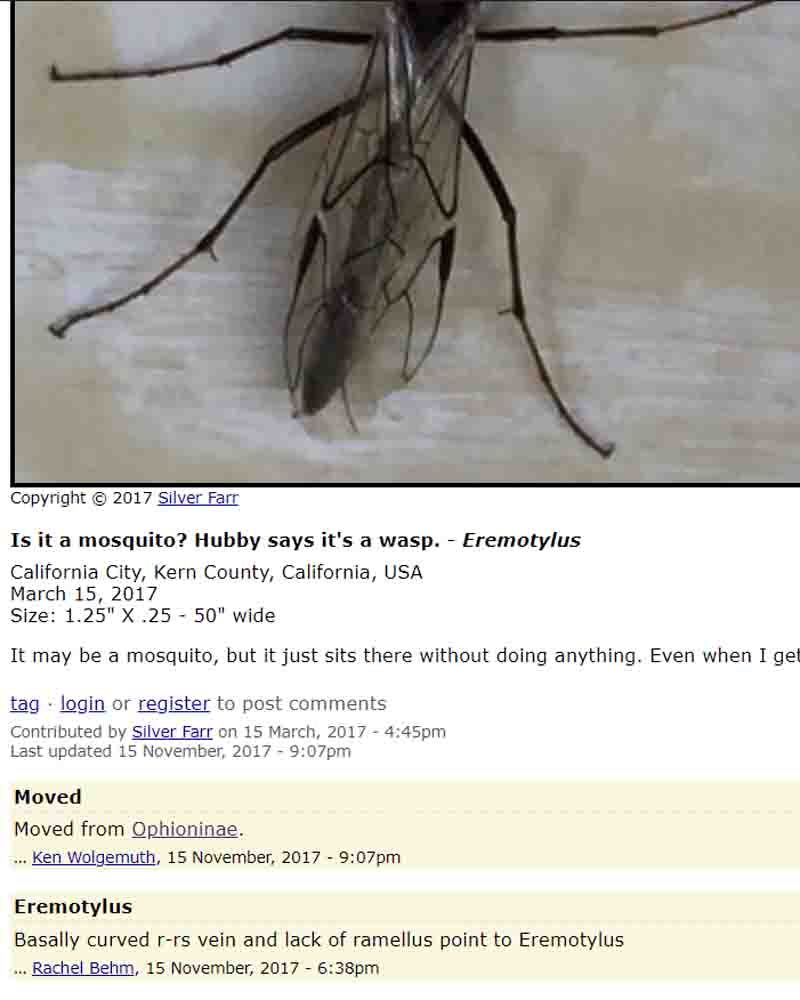 Behm identifies Ophionines morphologically to Operational Taxonomic Units (OTUs) to get a metric of diversity, using historical descriptions in scientific literature and comparing those descriptions to the specimens. Identifying characteristics are often hard to pin down (pun intended). Historically, color has been used to describe old holotypes or voucher insects, from "flavous" (yellow) to "fulvous" (orange) to "ferruginous" (reddish), but these are inexact and may be due to individual variation or specimen aging. Color, while good for spot identification in the field, is notoriously a bad diagnostic characteristic for insects. Unfortunately, many older descriptions start with language such as a "honey-yellow body." Body markings have also been considered as a way to identify different species or genera, but they could also be caused by individual variation. 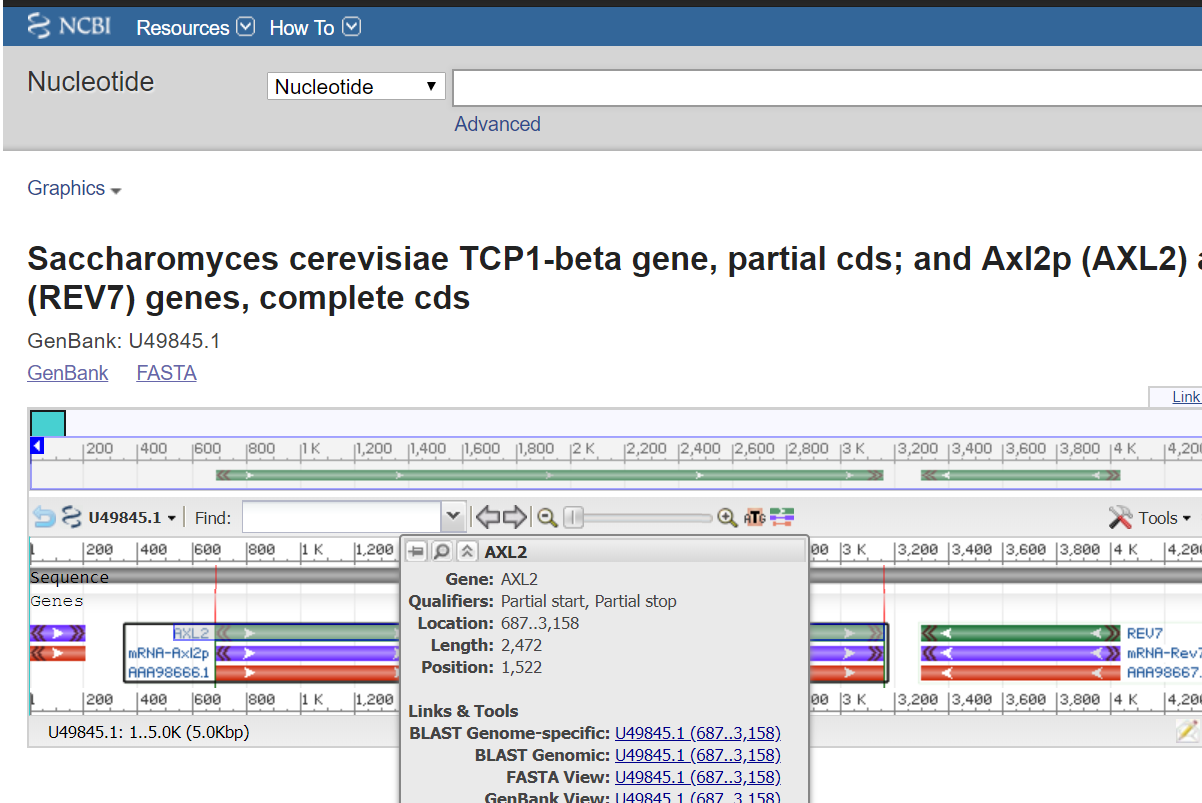 Recently, more work has been done to identify wasps and confirm OTUs through morphometrics and DNA analysis by systematists such as Marla Schwarzfeld and Pascal Rousse. The genes of interest in Ophionines are the COI and 28S regions in the DNA barcode, and they can be accessed through GenBank and Bold Systems, which store publicly available DNA sequences.

To get a better idea of the true extent of Ophionine diversity, Behm wants to examine the original holotypes, which are the individual specimens that the first species descriptions came from. Most of them are in the Smithsonian Institution's National Museum of Natural History. Behm also wants to document and describe beyond OTUs to the species level if needed, using OTUs to re-analyze the phylogenetic concepts of Ophioninae.

Behm continues to sort UCSB's Ophioninae specimens. Many of them are in the process of being databased, where specimens and labels are imaged and uploaded to the collections in-house data portal. Label data must also be transcribed and georeferenced. Read about the transcription event earlier this quarter. In the future, Behm also hopes to hand-rear Ophionines to better learn their ecology and host preference. While they feed on and pupate inside of caterpillar hosts, adults eat nectar, and it is not known what species of plant they prefer. 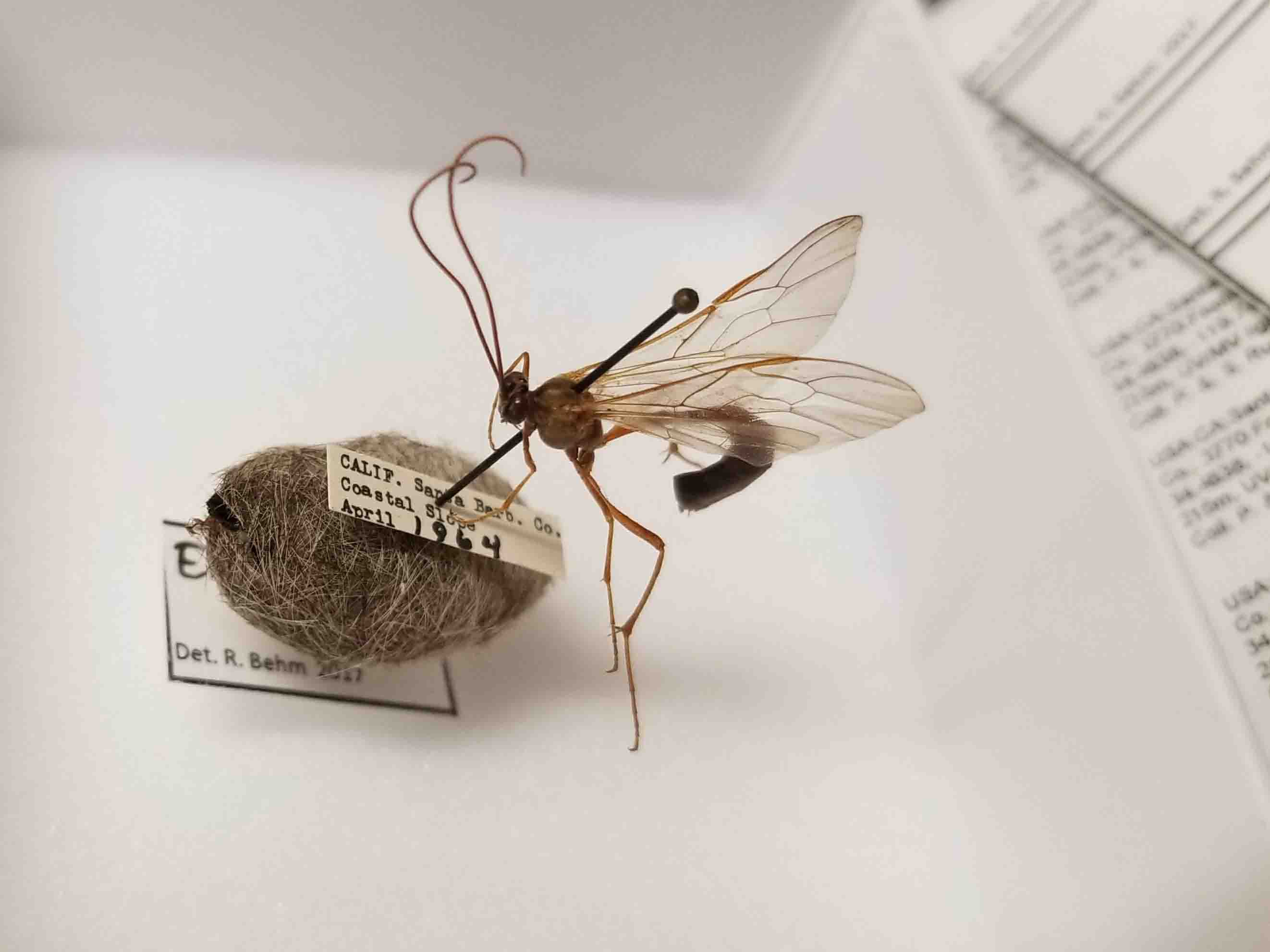 An Ophionine pupa with adult pinned on top. These pupae are not normally seen, having grown within the body of the caterpillar host.

Many thanks to Rachel for her work and her help editing the article! Interested in more information, or want to talk about Ophioninae wasps? Contact Rachel Behm at rbehm@ucsb.edu.