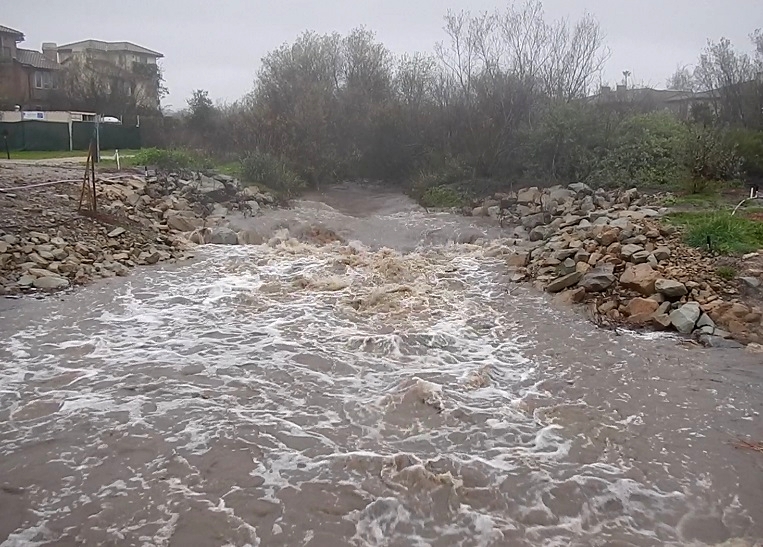 A high flow from Phelps Creek empties into NCOS during a storm on February 1, 2019.

With National Estuaries Week and Santa Barbara County's Creek Week happening this month, it's a good opportunity to update and review some results from our ongoing monitoring of one of the most important elements of the NCOS wetland restoration project - the water.

Earlier this year we described three of the main impacts a watershed can have on the health (or quality) of a wetland. Two of these impacts that we've been monitoring are the concentrations of nutrients (nitrogen, phosphate and ammonia) and suspended solids (primarily sediment) being flushed into the wetland during storms. We use two methods to collect stormwater samples for analysis: manual grab sampling and automated sampling using portable ISCO pumps. Grab sampling usually captures only one or two samples per storm, while the ISCO pumps can be set to sample at intervals such as every hour and subsequently provide more information about what happens to nutrient and sediment concentrations in the tributaries and wetland during a storm. 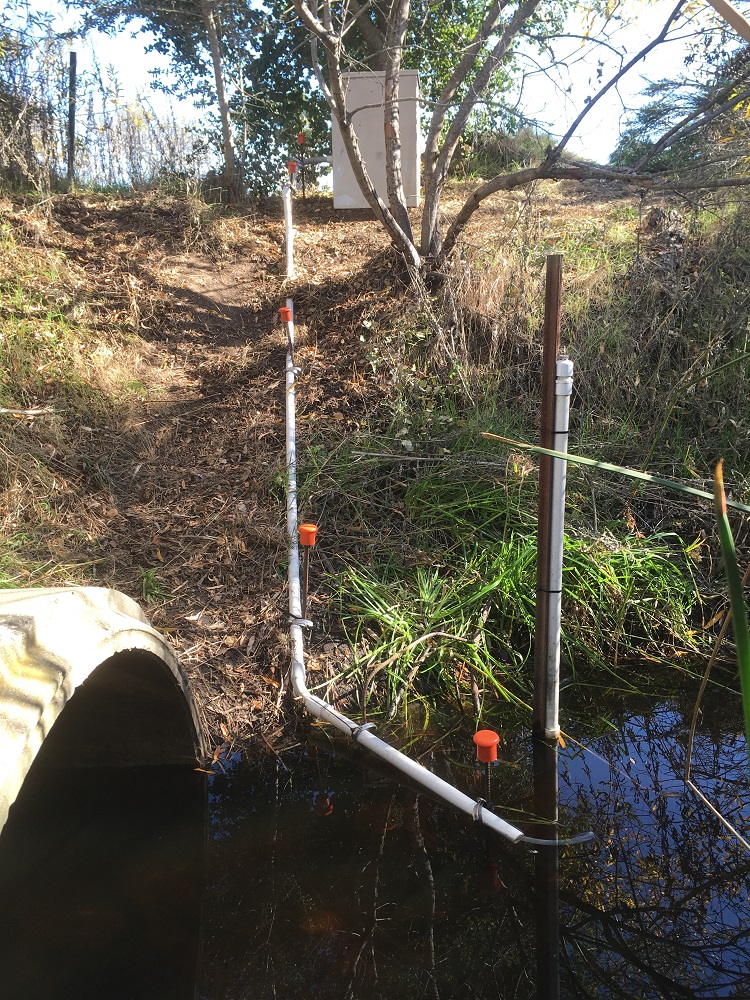 The watershed that feeds into NCOS and Devereux Slough is relatively small and mostly urbanized, and consists of four main tributaries: Devereux Creek from the west, Phelps Creek from the north, and the Whittier Drive and Storke Road stormdrains from the east. Phelps Creek drains the greatest area of the watershed and is likely the largest source of run-off that enters the wetland. This past winter, we collected samples during four storms at Phelps Creek as well as Whittier stormdrain outfall, and at Venoco Bridge - where the NCOS wetland enters lower Devereux Slough. In general, the results from this year's monitoring indicate that overall nutrient concentrations tended to be higher in the tributaries entering NCOS than downstream in the wetland. Nutrient concentrations were lowest during the highest stormwater flows at all sampling locations. 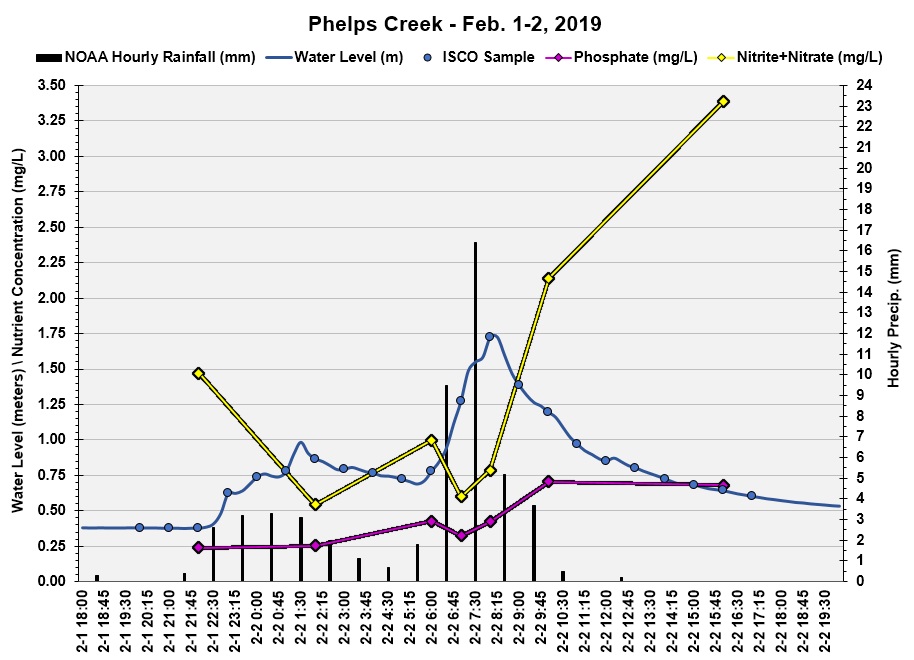 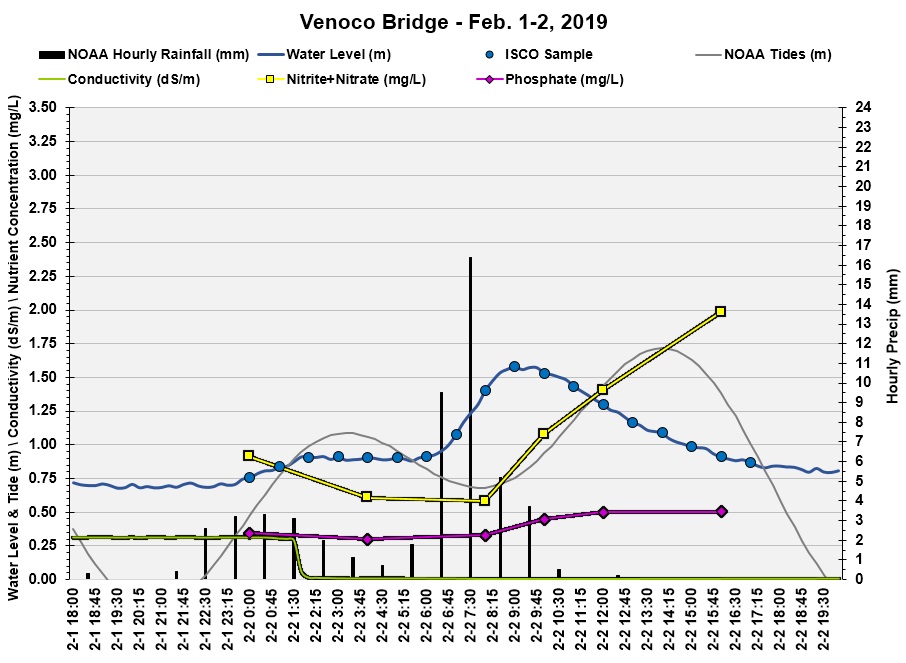 The two charts above show the water levels, rainfall, and the nitrogen and phosphate concentrations in Phelps Creek (top) and in the NCOS wetland at Venoco Bridge (bottom) during a storm on February 1, 2019. The chart for the Venoco Bridge site also includes the tides and conductivity, which is a measure of salinity and indicates when fresh rainwater reaches the sampler. The nutrient levels we've observed this year do not appear to be different than what has been observed in a previous study that was part of the Santa Barbara Coastal Long-term Ecological Research network. We will continue collecting samples for further analysis, including baseline samples in periods between stormwater flows.

The flow of sediment and other suspended solids down a watershed can potentially impair a wetland if the sediments settle and build-up over time. However, sediment flows in coastal watersheds can play a beneficial role for beaches as a natural form of beach nourishment, provided that the sediment is not impeded from reaching the ocean. Devereux Slough is an intermittently tidal estuary that is typically closed off from the ocean by a beach berm during the summer and fall months, and is usually tidally connected with the sea for a period of time during the winter and early spring, depending on how much rain falls and how high the tides and surf erode the beach berm. This year saw a greater amount of rain than we've seen in recent years, and this led to more than a month of tidal connectivity.

For the four storms we monitored this past winter, suspended solids concentrations entering NCOS were below one gram-per-liter (g/L). Concentrations entering the lower slough at the Venoco bridge site tended to be initially above 1 g/L, but rapidly dropped to lower concentrations as stormwater flows increased. This suggests that suspended sediments in the wetland were likely being flushed out to sea during periods of tidal connectivity. 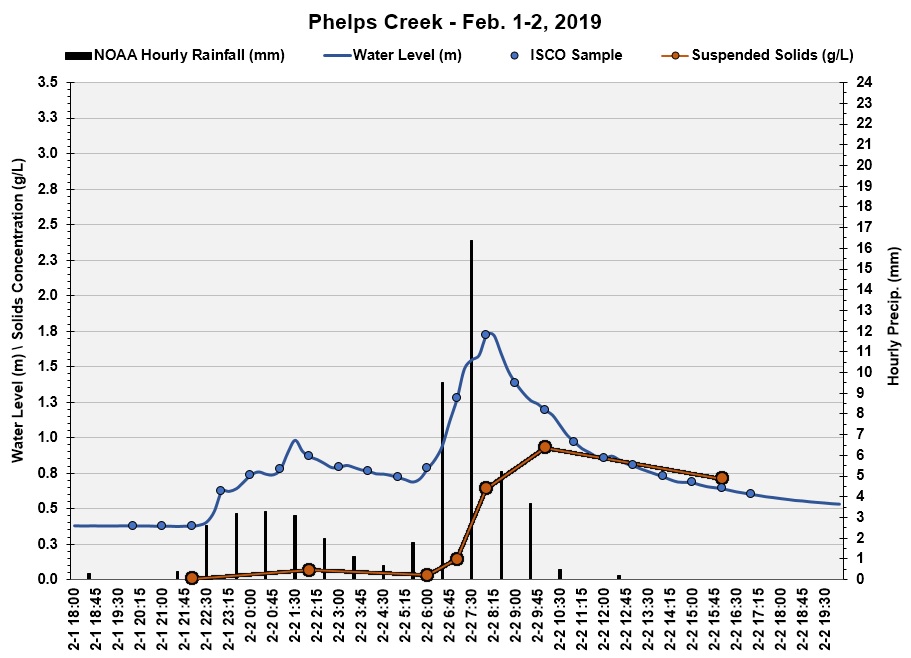 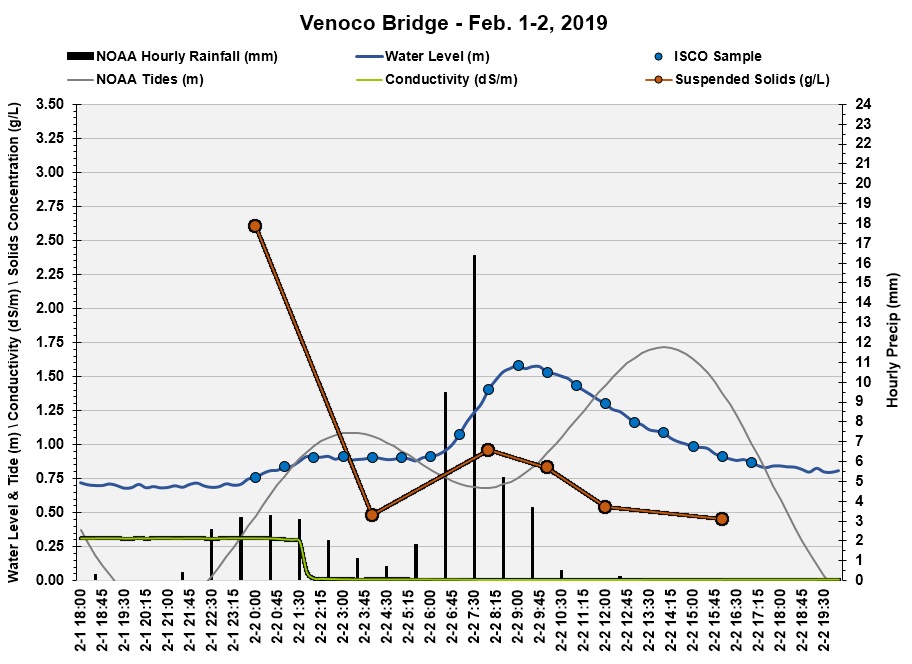 The two charts above show the water levels, rainfall, and concentration of suspended solids in Phelps Creek (top) and in the NCOS wetland at Venoco Bridge (bottom) during a storm on February 1, 2019. The chart for the Venoco Bridge site also includes the tides and conductivity, which is a measure of salinity and indicates when fresh rainwater reaches the sampler. One of the challenges with analzying the samples collected at the Venoco bridge site is that some of the samples may contain sea water instead of stormwater runoff when the slough is open and tidally influenced by the ocean. Therefore, the high concentration of suspended sediment in the sample collected near the beginning of the storm in the chart above could be due to a tidal influx of seawater carrying suspended sand from the beach. We intend to examine this further by collecting more stormwater as well as baseline samples in between storms this coming winter season. Stay tuned!