NCOS Vegetation Update: The Restoration Evidence Is In

CCBER's restoration team recently completed the second year of vegetation monitoring at the North Campus Open Space (NCOS) project. This monitoring tracks annual changes in native and non-native vegetation coverage and species diversity in nine of the habitats and vegetation communities on NCOS (basically all areas except for the sub-tidal wetland channels, creeks and mudflat). We use one of two monitoring methods depending on the type of vegetation: point-intercept transects are used for taller plants such as shrubs and trees in the riparian and coastal sage scrub communities, and for all other areas we quantify native and non-native vegetation coverage of all species as well as the percent of bare ground and other cover (e.g. mulch and thatch) within 1-square-meter quadrats placed every 3 meters along a 30-meter transect. 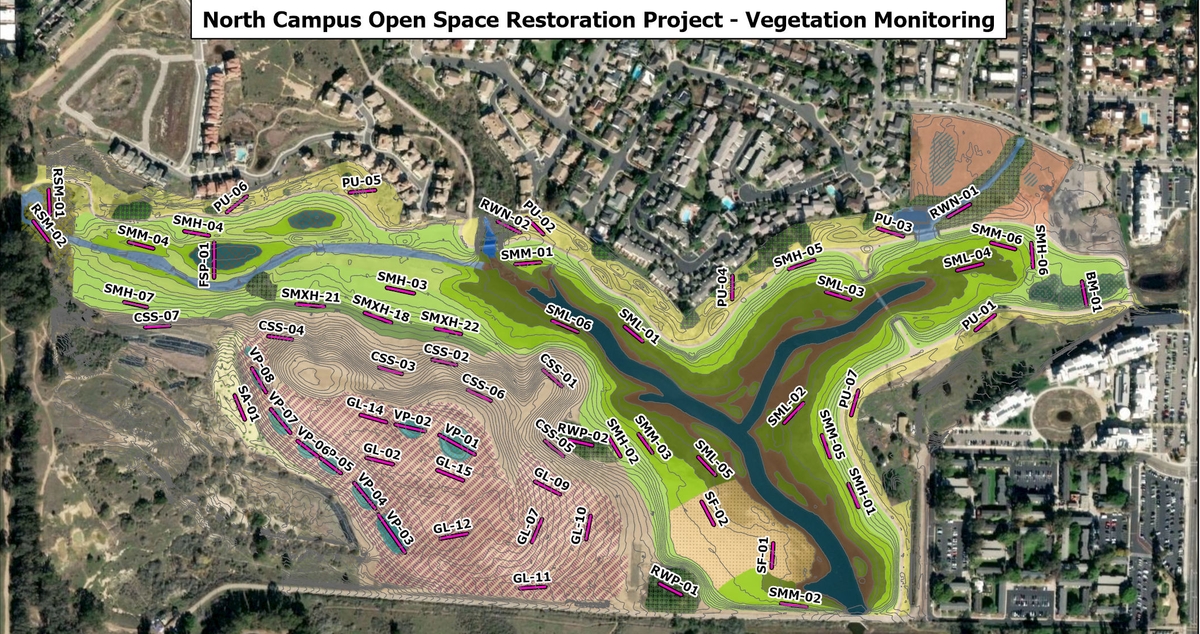 Three of the largest vegetation communities in terms of area of coverage on NCOS are saltmarsh (more than 37 acres including upland transitional vegetation), the perennial grassland on the mesa (15 acres), and what we call the peripheral uplands along the northern and eastern sides of the site adjacent to the community housing (9 acres). Across these communities we monitor a total of 396 quadrats along 36 transects.

The second year of monitoring in these areas shows an overall increase in cover and diversity of native plants and a decrease in unvegetated area or bare ground. Non-native vegetation coverage is about half or even less than native coverage with only small changes compared to the first year, while non-native species diversity increased (especially in the peripheral uplands) and is greater than native diversity.

Overall, 56 native species and 68 non-natives were identified in this year's monitoring of the peripheral uplands, perennial grassland, and the saltmarsh & transition communities. The native species seen the most this year include the saltmarsh aster (Symphyotrichum subulatum) that dominated much of the upper saltmarsh transition and peripheral uplands, followed by purple needle grass (Stipa pulchra), pickleweed (Salicornia pacifica) and saltgrass (Distichlis spicata) - three species that we have planted and seeded more than any others on NCOS. For the non-natives, Italian rye grass (Festuca perennis) and a Spergularia species were seen more often than other non-natives. More details of the vegetation monitoring for all of NCOS will soon be available in the Year 2 Monitoring Report - stay tuned! 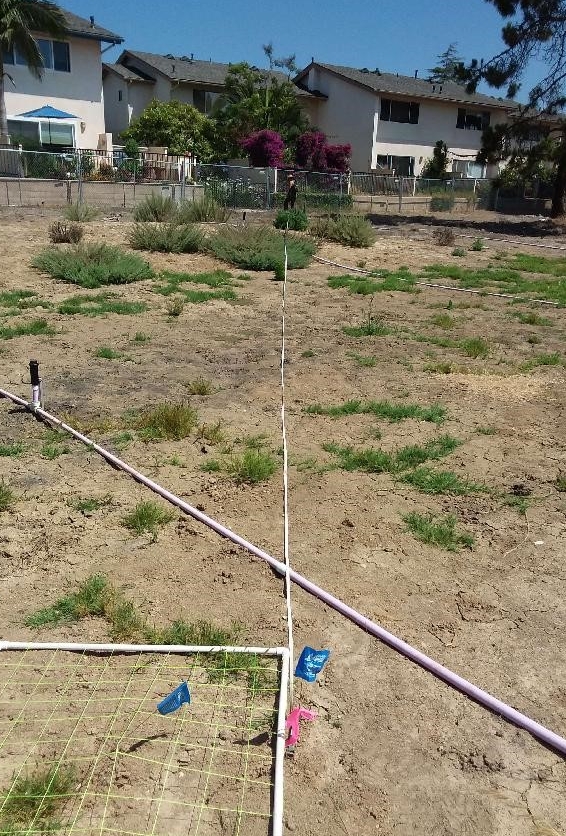 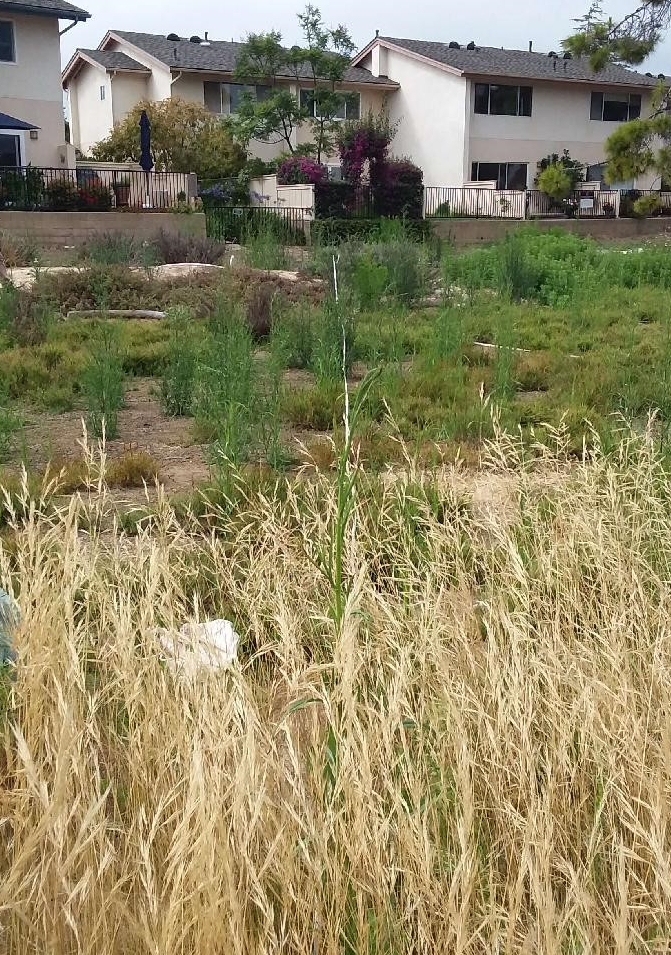 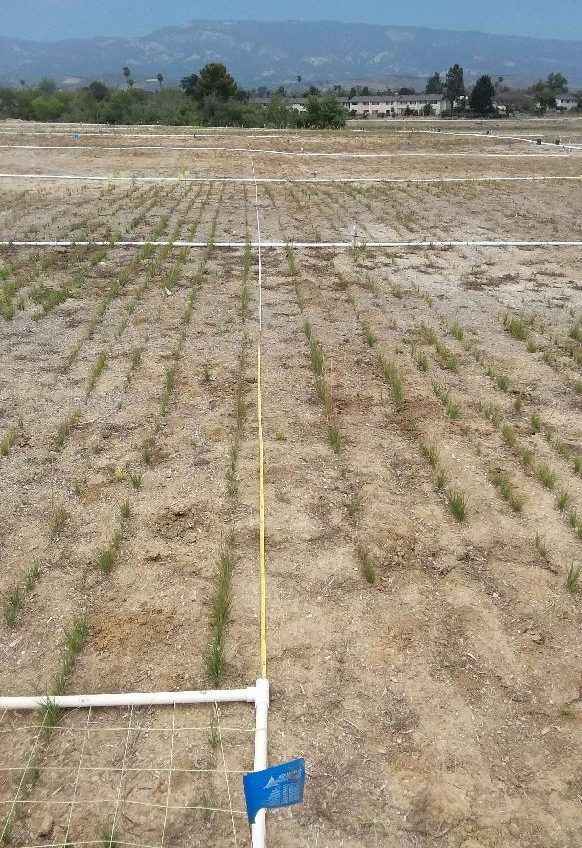 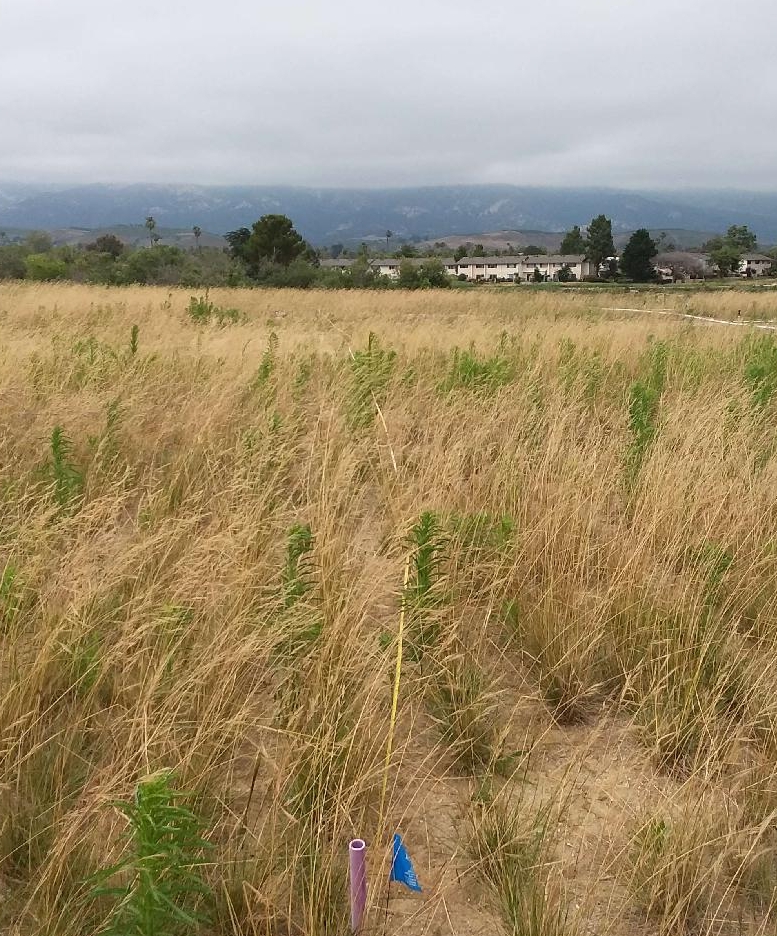 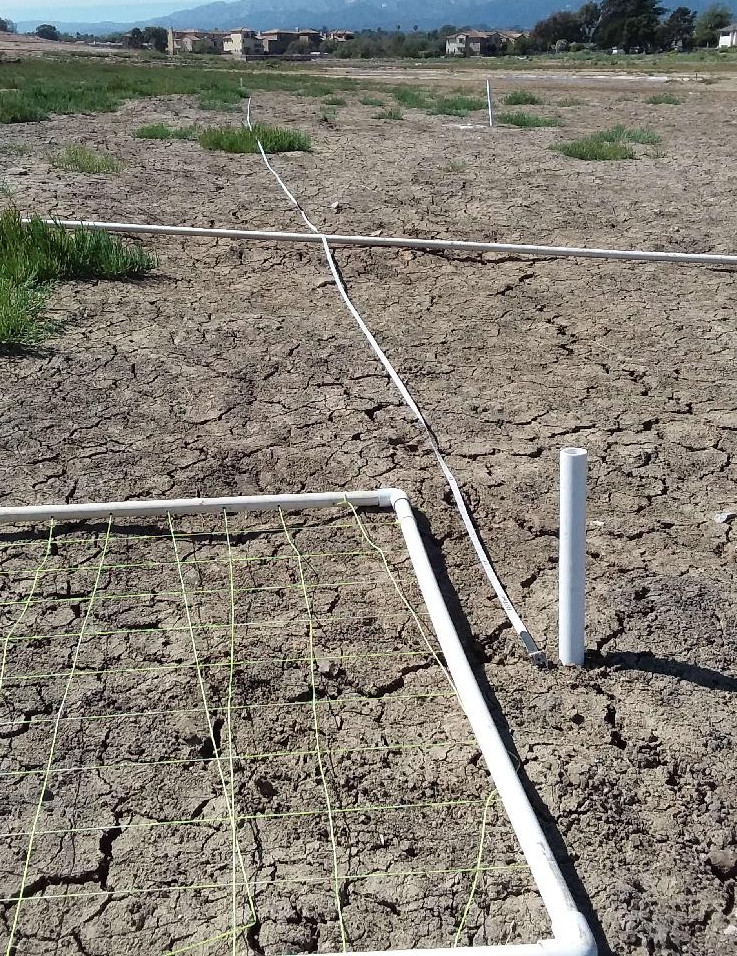 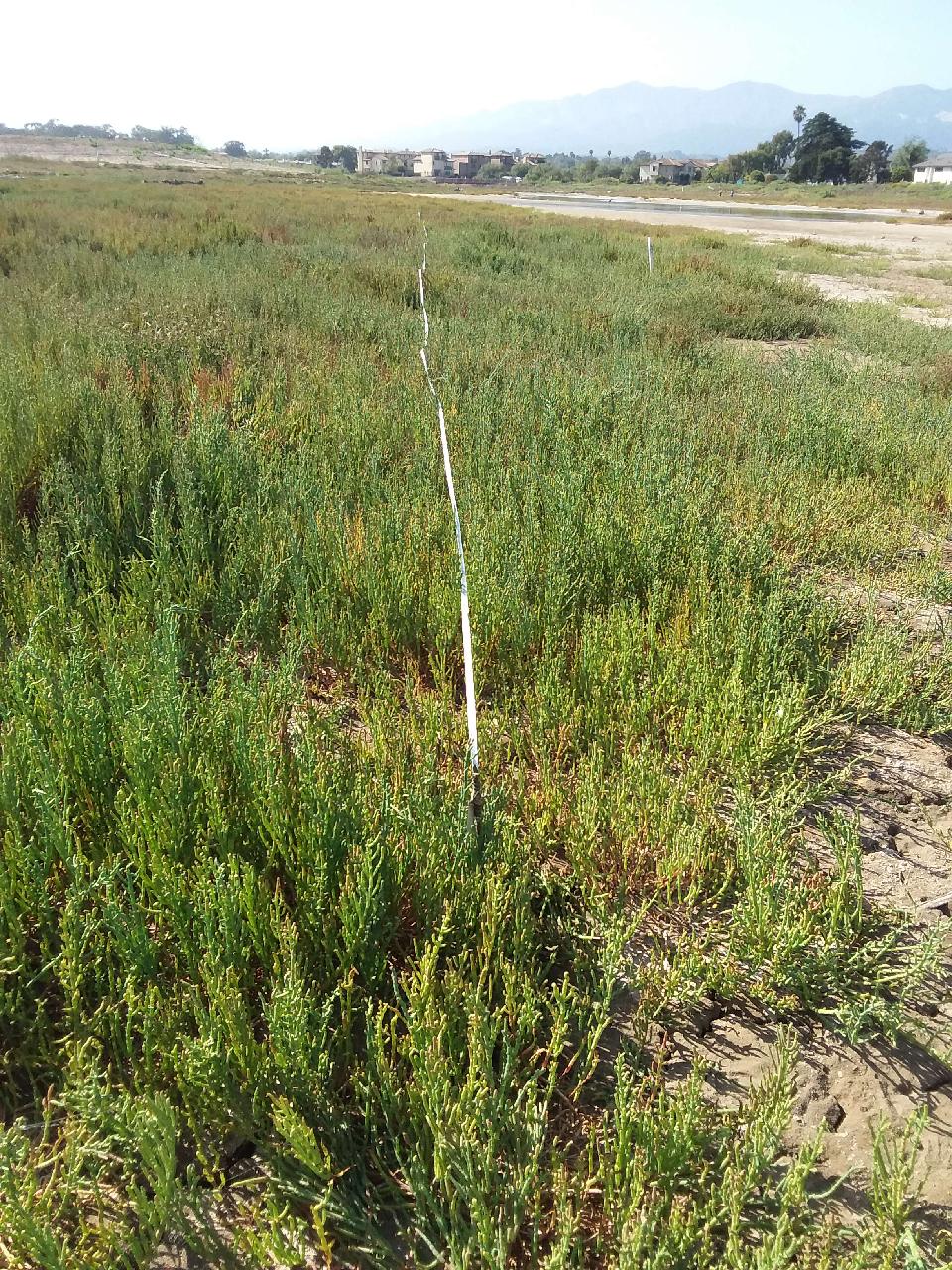 The mesa is starting to look more green! After several months of planting, we are beginning to see excellent growth from the diverse palette of coastal sage scrub species and grasses. In the coming months, we will continue to expand our restoration planting efforts into the western area of the Mesa, adjoining the South Parcel site that has been undergoing restoration since 2013. In addition, we are in the process of developing plans for diversifying the Mesa grassland with herbs, forbs and wildflowers. 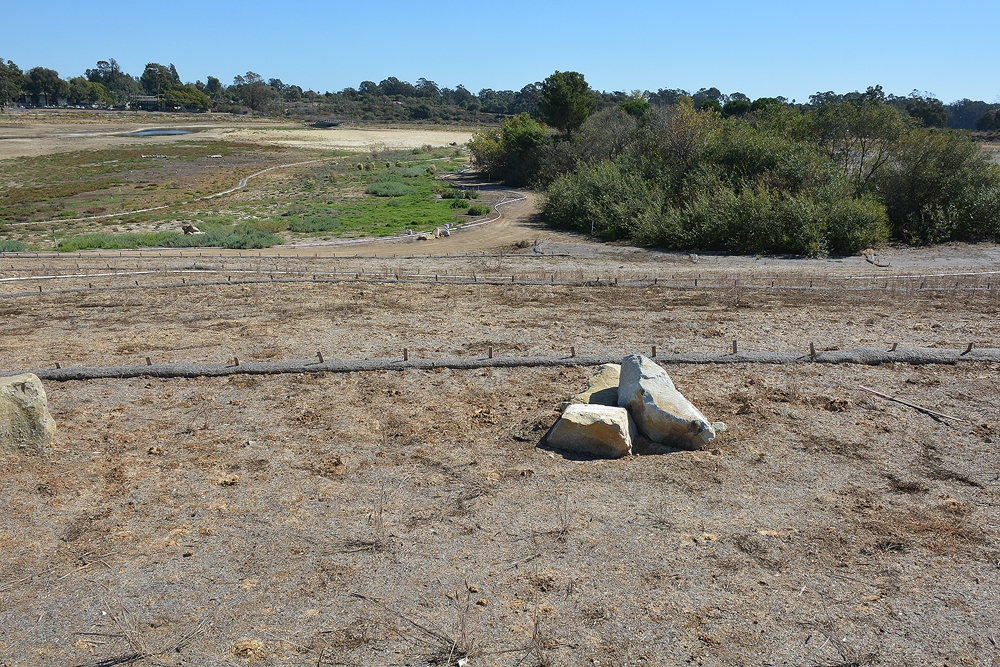 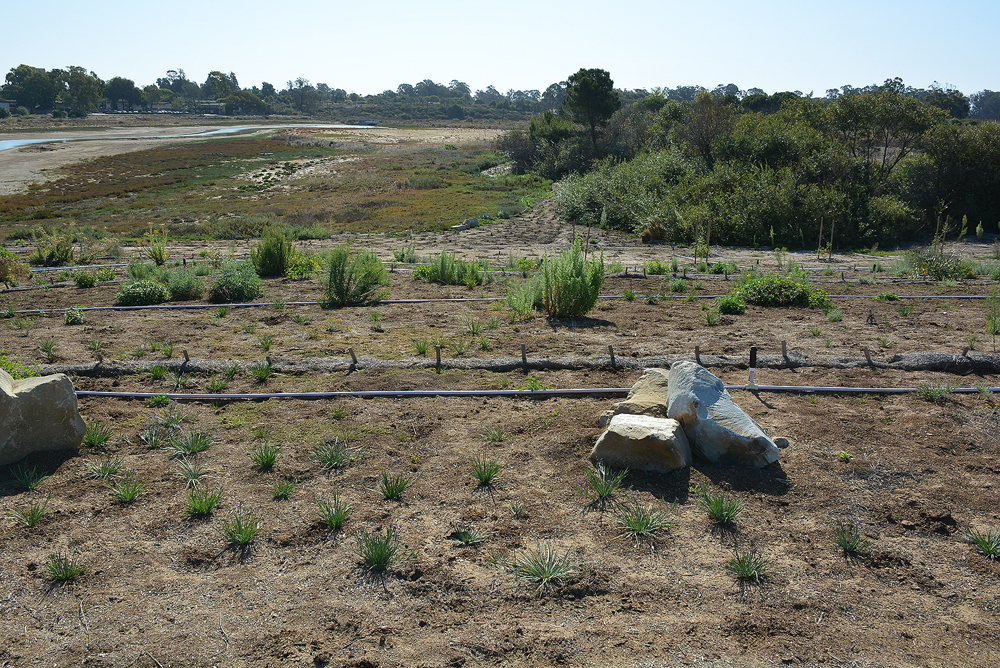 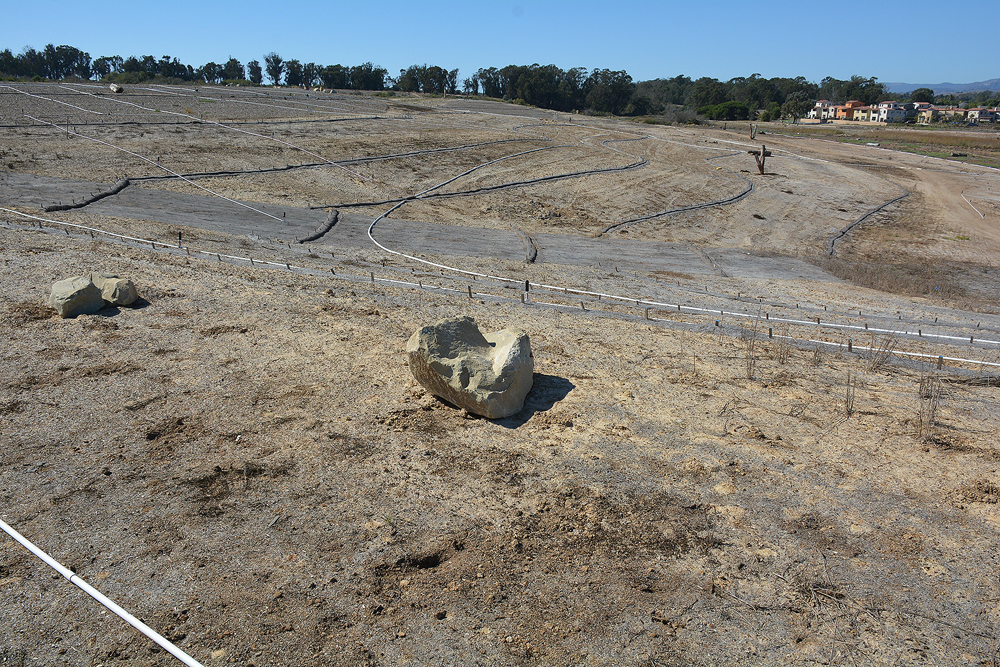 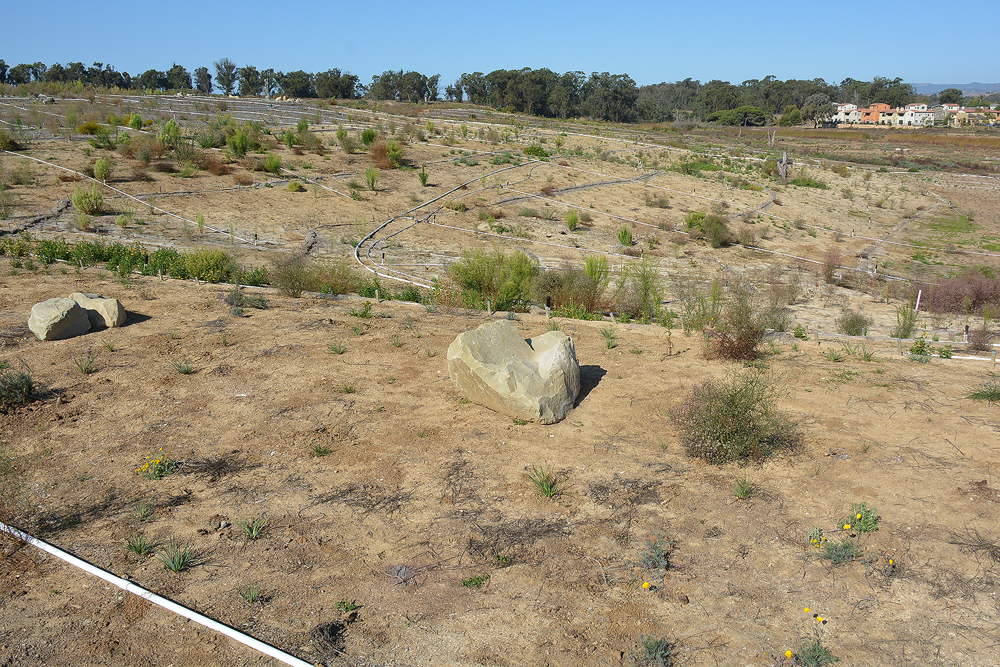 The photos above show restoration progress and growth of native species on the Mesa Slopes from October 2018 (left) to October 2019 (right). 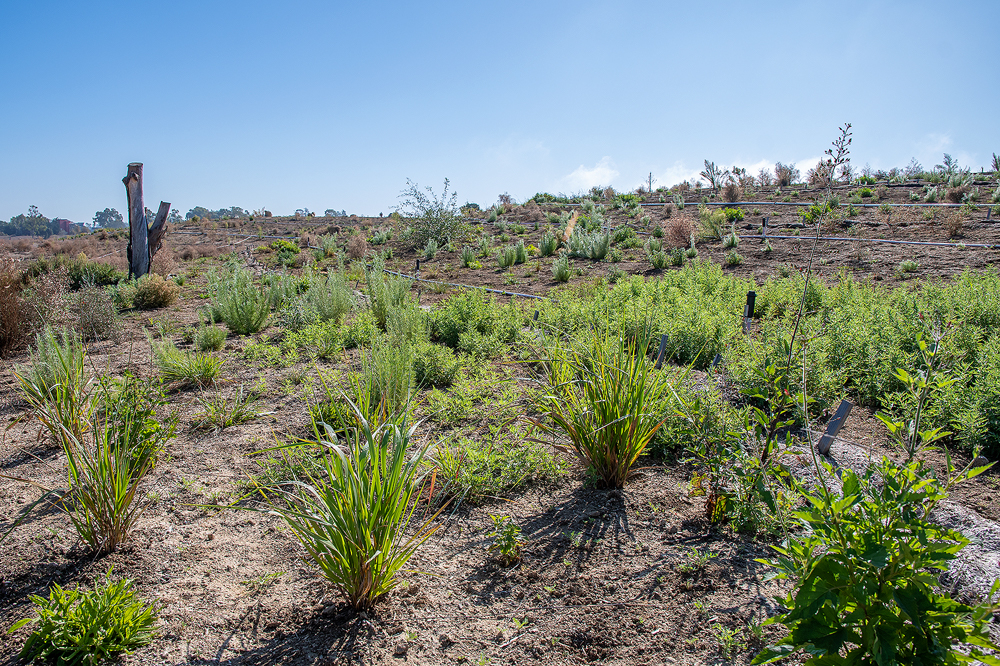 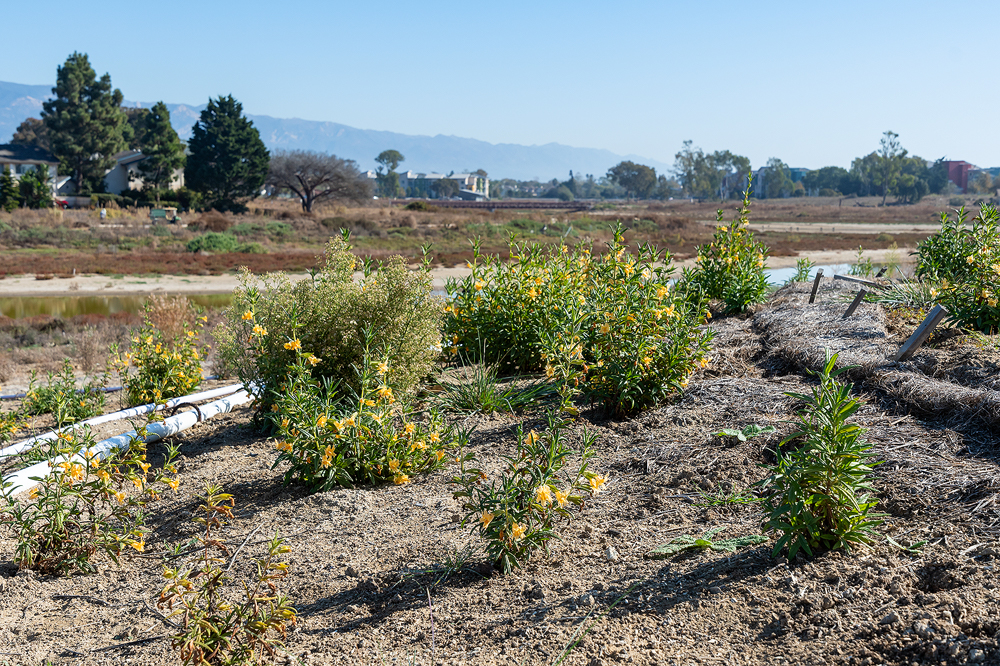 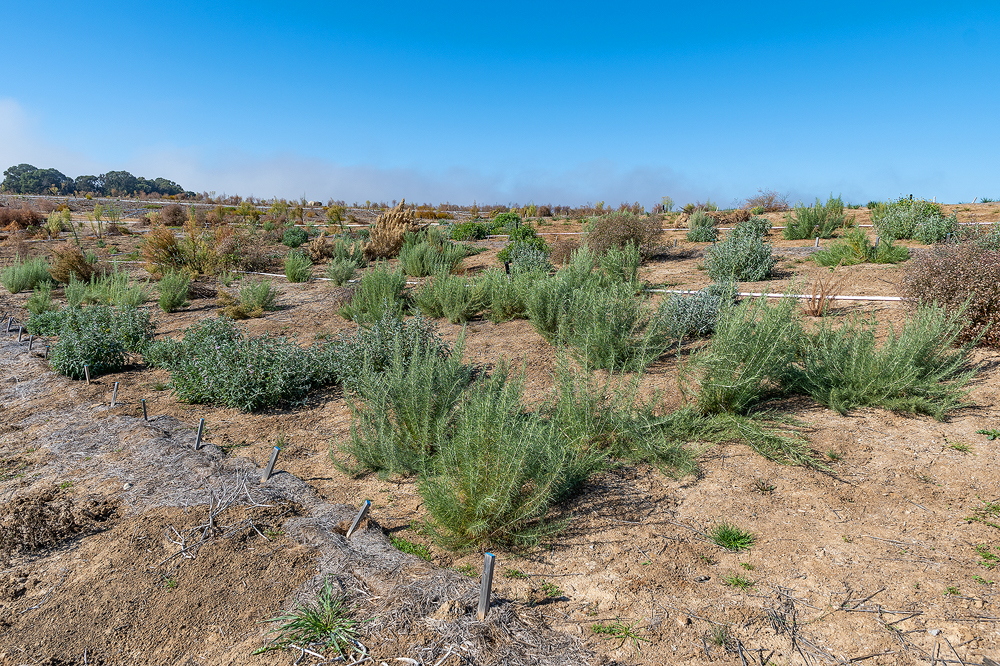