The NCOS wetlands are part of Devereux Slough, and an example of an intermittently tidal system. For most of the year, there is a sandbar at the beach that blocks the connection between Devereux Slough and the ocean. This sandbar is breached and partly, if not largely washed away when water levels in the slough exceed the height of the sandbar (approximately 9.5 feet above sea level). When the breach occurs, the system becomes tidal until the sandbar is rebuilt by wave action re-deposting sand on the beach. The breaching of the sandbar is an exciting event, with dramatically changing water levels as water rushes out of the wetland system into the ocean, creating a widening channel at the breach site, as seen in the photos below. 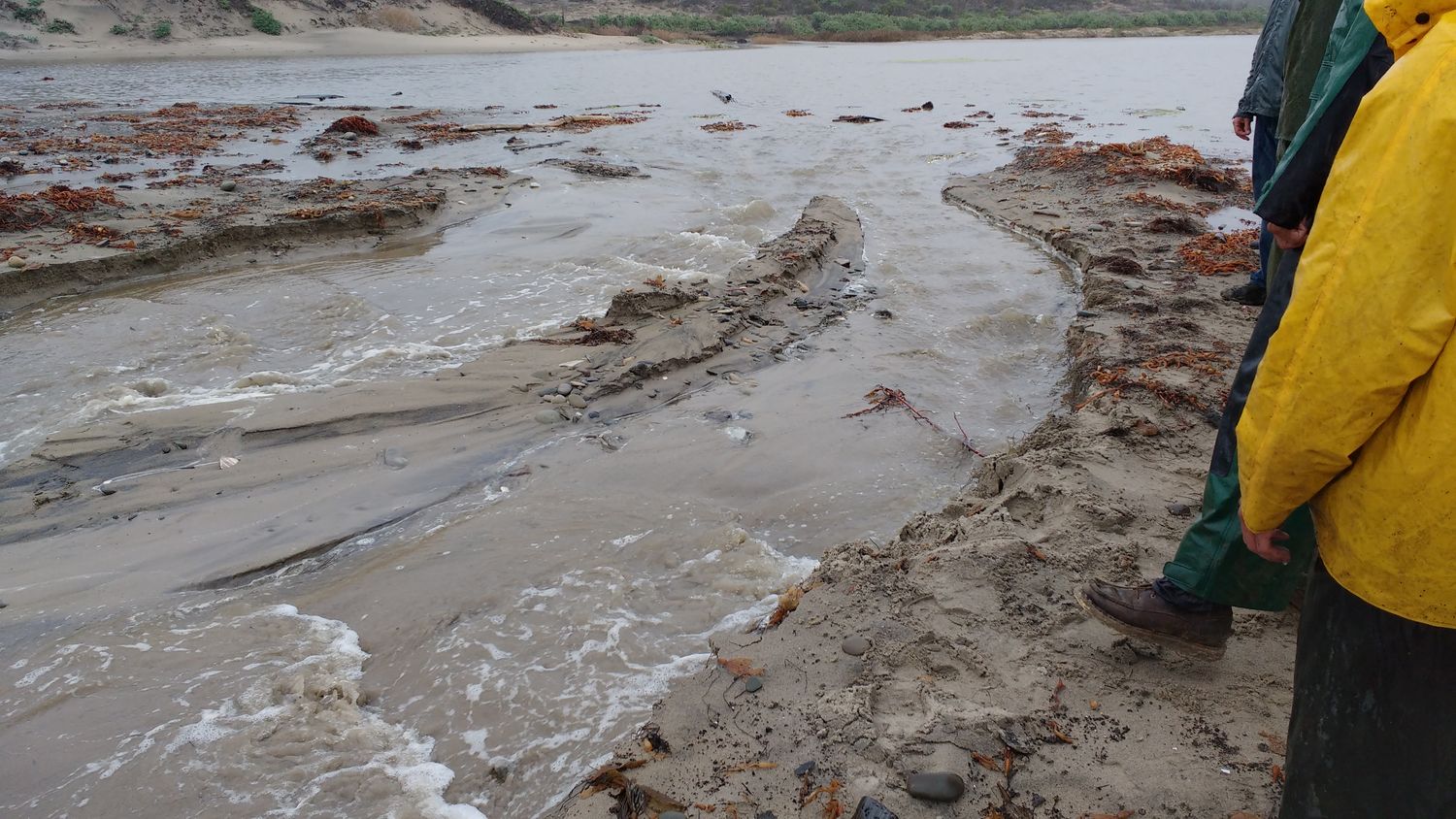 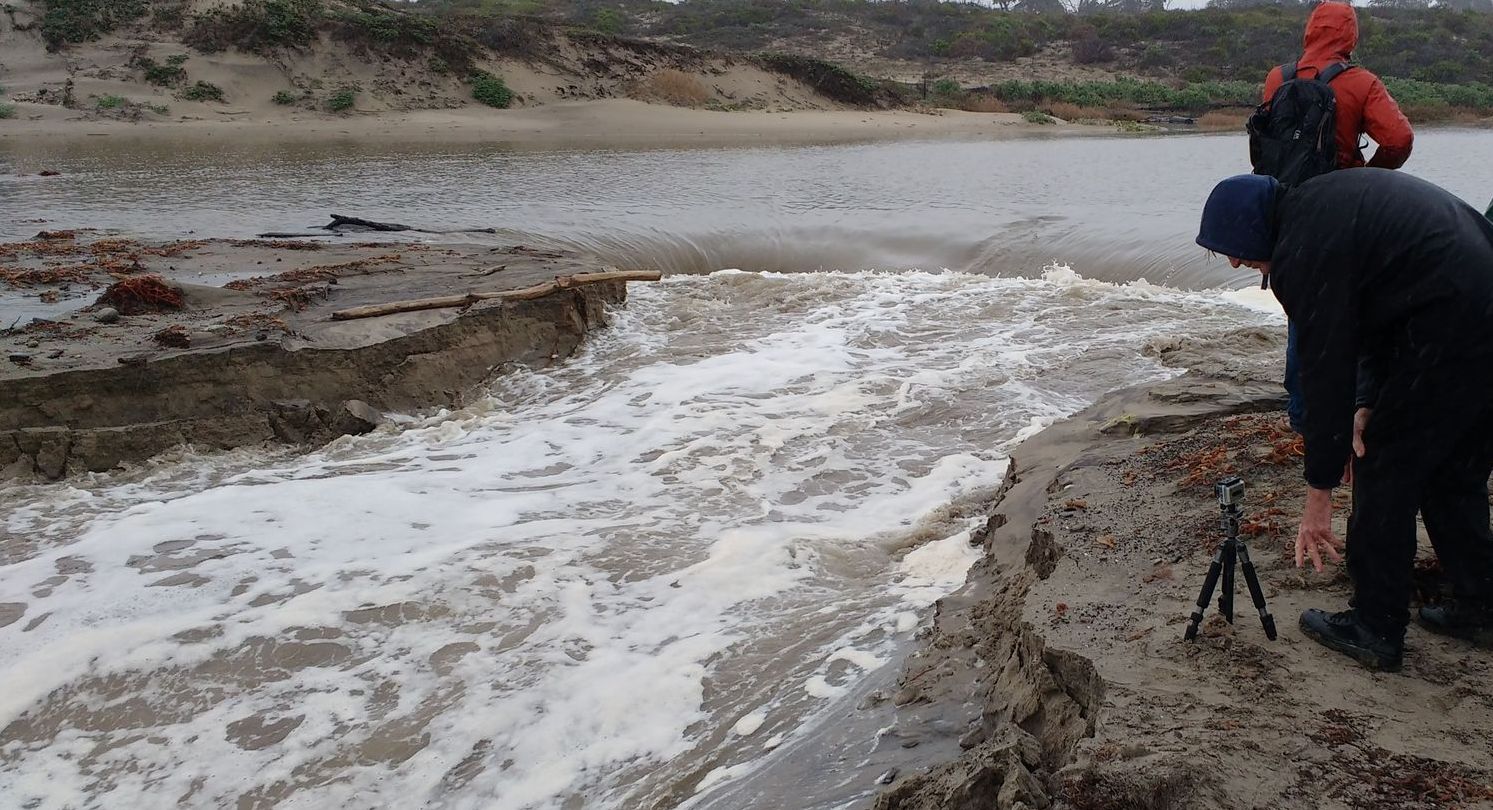 Filmmaker Michael Love captured this year's breach on video, including time-lapse footage of NCOS water levels rising during the heavy rain event March 20th to 22nd and then rapidly receeding after the sandbar was breached, as well as time-lapse of the channel widening.

The restoration design for NCOS was based on hydrological models of the sytem created initially by UCSB graduate student Andrew Rich and integrated into models developed by Environmental Science Associates (ESA) during the design phase. Special models are needed for these unique estuaries whose connection to the ocean is mediated by wave strength, rainfall, and evaporation. Waves and longshore sand transport affect the size of the sandbar separating the wetland from the ocean, while rainfall affects how much water enters the system, the water levels, and when the sandbar breaches.

Prior to the NCOS restoration project, half of the wetland’s potential water-holding capacity was supplanted by soil deposited to create the golf course. This caused water levels to rise rapidly to flood levels at the interface between the incoming creeks and the former wetland. In 2016-2017, before the restoration of NCOS began, the water level in Phelps Creek at Marymount bridge rose by 7 feet to over 17 feet in elevation during a storm event on January 20, 2017 (Figure 1). Last month, after a similarly sized post-project rain event, the Phelps Creek water level rose to just 13 feet in elevation (Figure 2). These patterns are similar in the western arm of the system, where Devereux creek enters, which rose to 15 feet in 2016-17 (Figure 1) and just 11 feet this year (Figure 2). The design of the system, with seasonal ponds and shallow slopes, allows the water to be retained to support groundwater recharge and wildlife habitat. 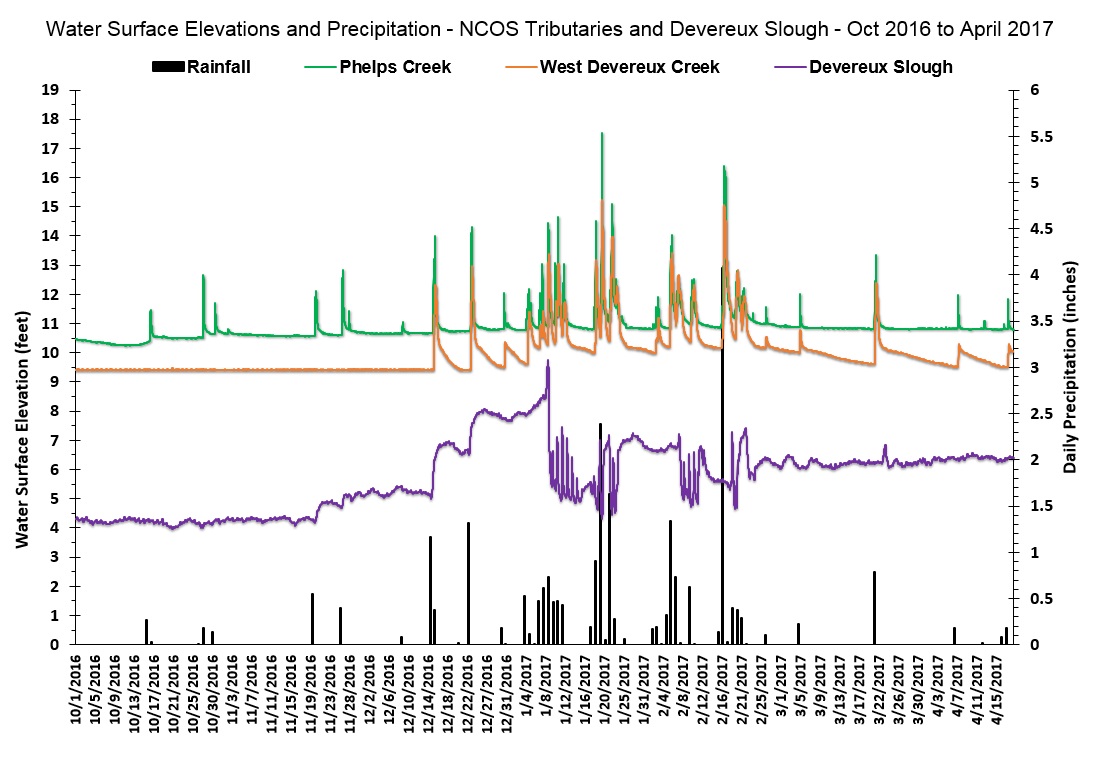 It took just 6 inches of rain in 2016-17 to breach the sandbar (on 1/9/17) to connect the system to the ocean, but with the increased capacity of the system this year, the mouth did not breach until rainfall totals reached 7.8 inches (on 3/22/18), reflecting an increased capacity to hold water. This increased capacity is reflected in the hypsometric curve, a graph that shows the water stage (or elevation) compared to the holding capacity of the system in acre feet of water (Figure 3). One acre foot (af) is the amount of water that would cover one acre to one foot depth. The sand bar usually holds the water in the system up to about 9.5 feet elevation. The blue line in Figure 3 shows the capacity of the system before the project when the mouth would breach after holding about 200 af of water. The orange line shows the post-project capacity of the system indicating it will hold closer to 350 acre feet before it breaches now. Newly restored intermediate ponds and wetlands and shallow slopes provide additional opportunities for water to soak into the soil and recharge groundwater stores, while also creating water regimes that will support different types of birds and other wildlife. 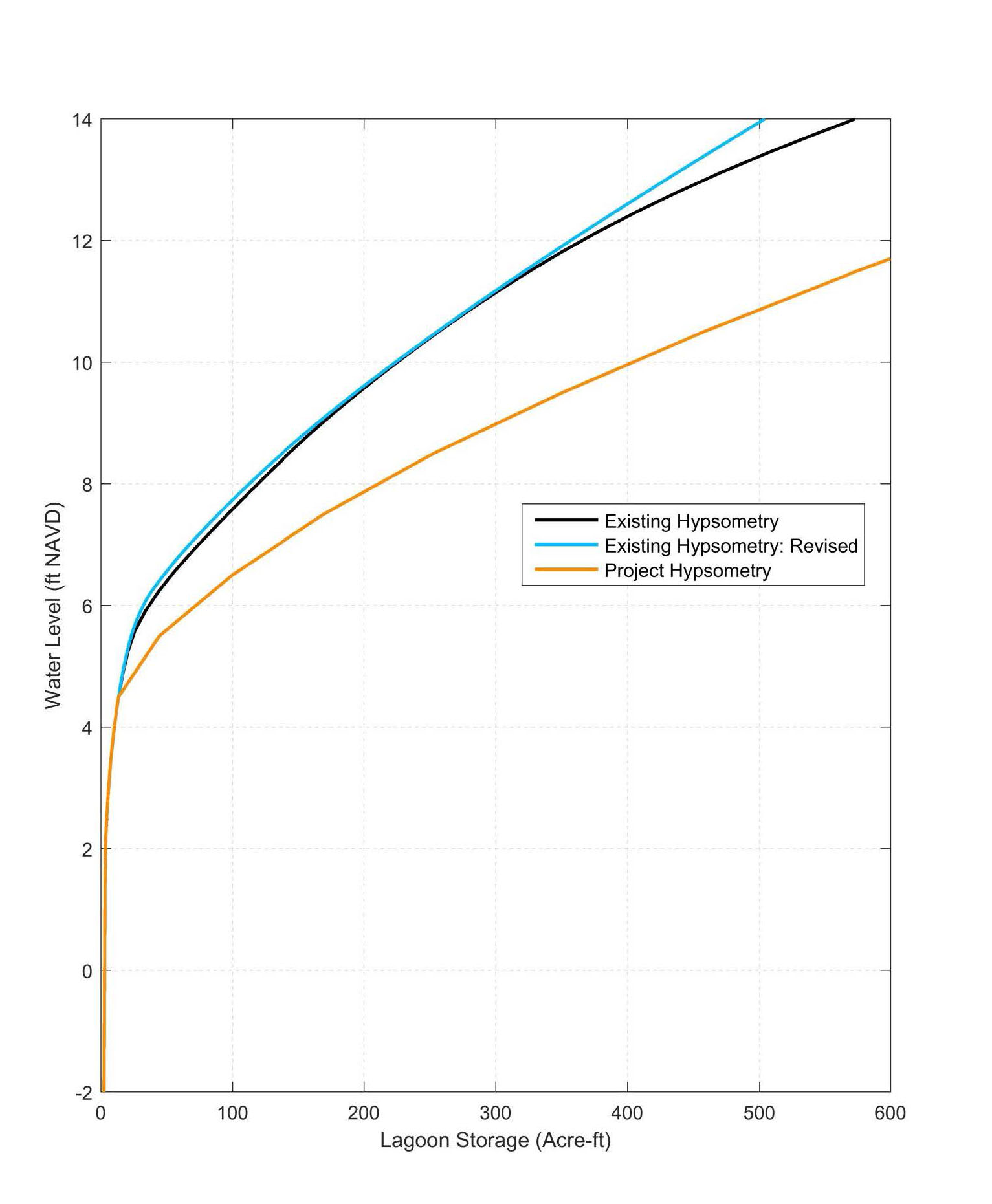 The consulting team at ESA predicted that Devereux Slough would breach the sandbar around mid-morning on Thursday, March 22nd - the breach began at 11:30 that morning. Due to the high tide at that time, and the ensuing mid-level tides and low wave energy, they also predicted that the re-building of the sandbar would close off the mouth of the slough sometime during the first week of April, which is essentially what happened.

The hydrology of the restored system at NCOS closely follows the modeled predictions, and provides increased wetland capacity, habitat diversity and flood protection. This dynamic system will provide an ever-changing panorama of wetlands with varying salinities that support a diverse array of species. It is designed to be adaptive to sea level rise, preserving both vegetated and unvegetated habitats, as well as the trail system, through several meters of sea level rise. NCOS handled the two large storm events of this winter's rain season without any significant erosion, while also facilitating the vital ecosystem service of transferring sediment from the mountains to the ocean, and subsequently supporting beaches and coastal protection. 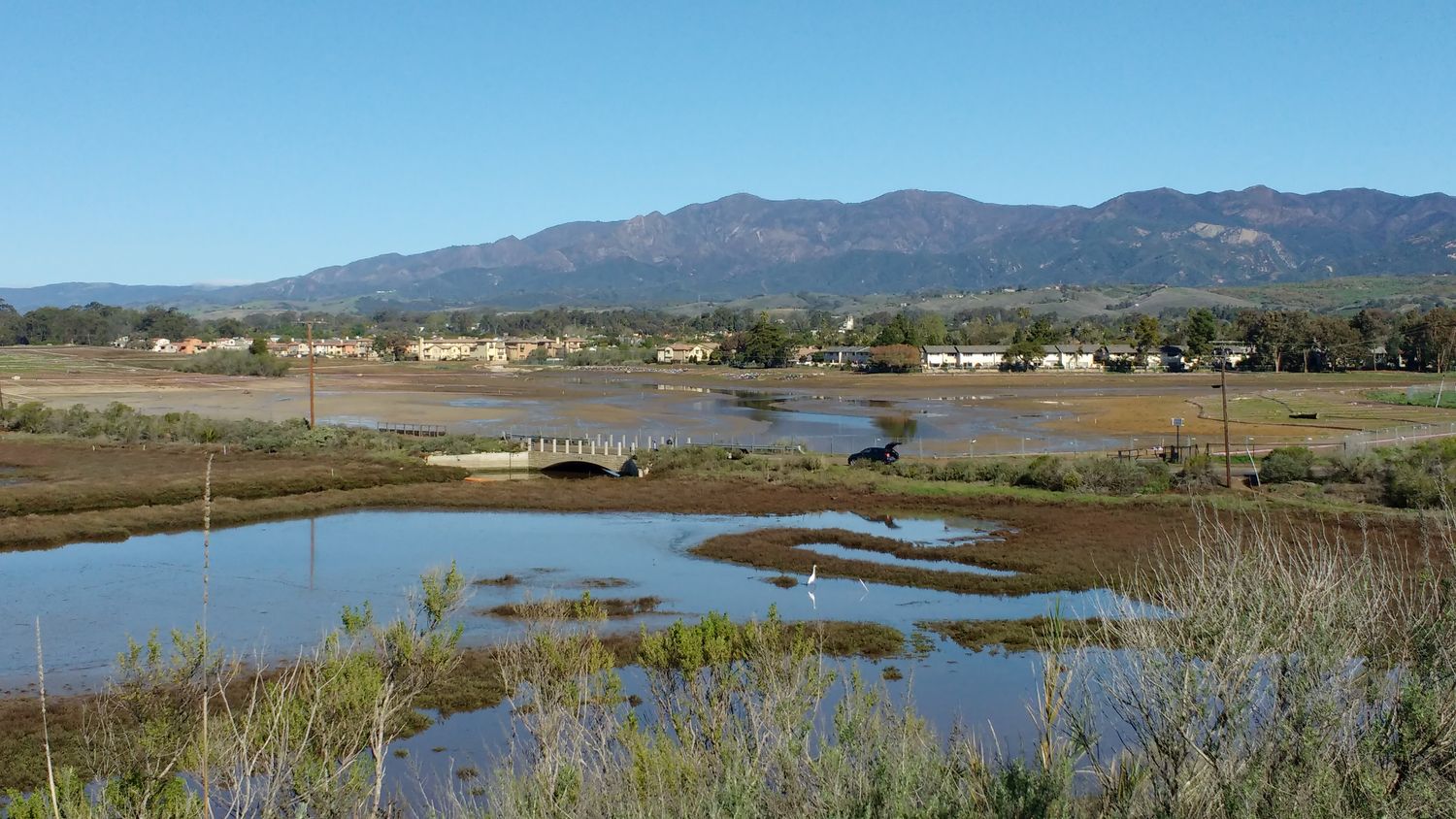 View of NCOS from Slough Road on March 23, one day after the breach and the water level dropped by more than 4 feet.