Breaking news! The Federal Emergency Management Agency (FEMA) has issued what is called a LOMR or Letter of Map Revision, which formally documents a change to the flood hazard zone of an area. The flood hazard zone is the extent of a particular landscape subject to a 1% chance of flooding in a year. Structures within the Flood Hazard Zone are required to secure flood insurance if they have federally backed mortgages. One of the more practical goals of the North Campus Open Space restoration project was to reduce localized flooding by restoring the wetland and creating a means for flood waters to be conveyed away from structures and homes and into wetlands and the ocean. Thanks to our partnership with County Flood Control and Stantec hydrogeology, FEMA has formally recognized this project. Initial studies had modeled a 1.5 to 2 foot drop in local flood elevations and this LOMR documents how that reduction plays out on the landscape. 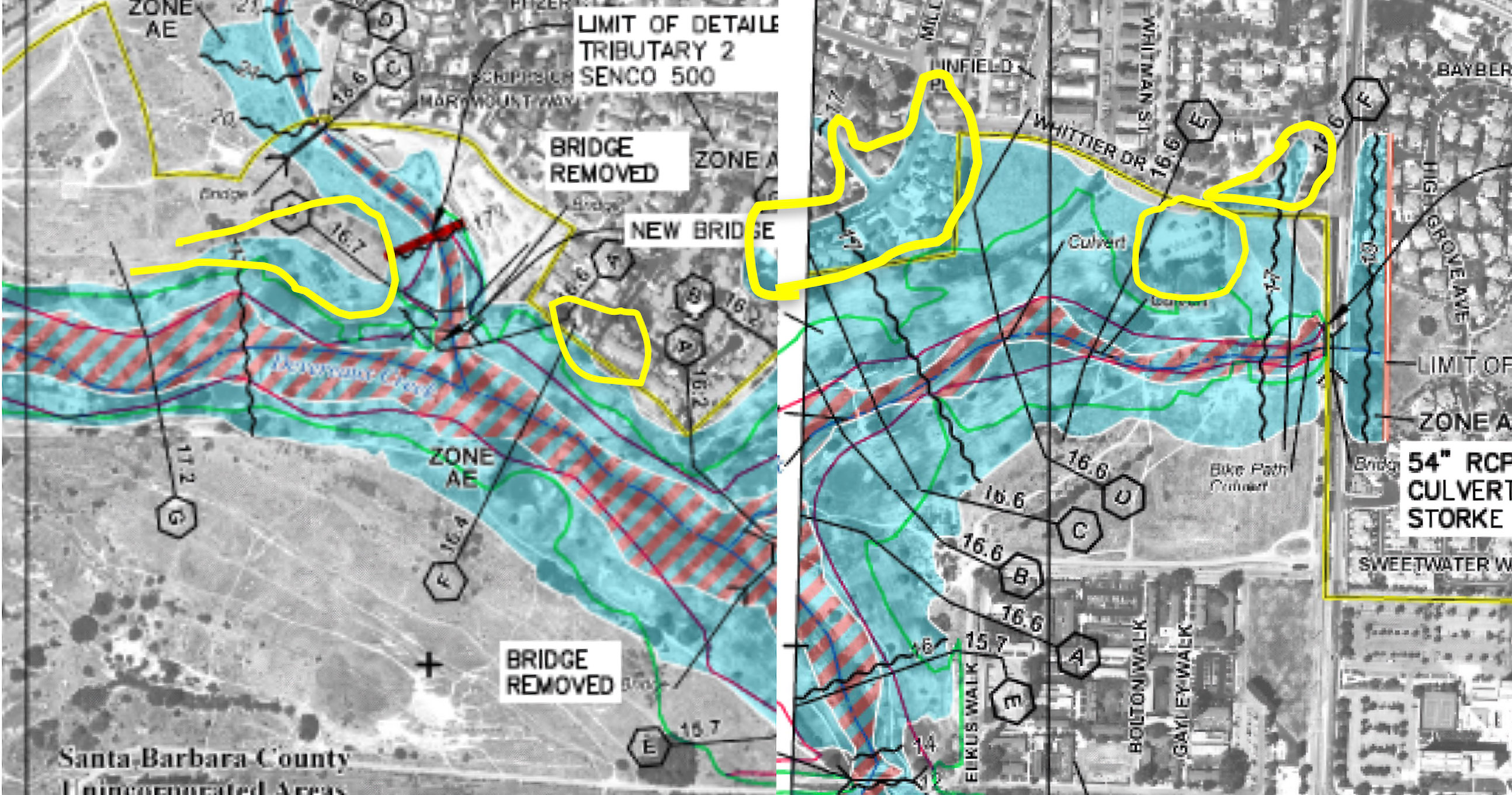 Figure 1. This is the pre-project flood hazard map and shows the proposed revision as a faint green line with the yellow zones highlighting residential areas to be removed.

In the map above you see the pre-project flood hazard zone in blue. The faint green line is the proposed revision, which is made crystal clear in the revised map seen below (effective January 2022). You may notice that in some cases the “Floodway,” shown with red hatches is wider in the revised map. This is because the restoration project increased the low elevation, flood conveyance area by excavating the wetland and removing the fill that formerly constrained the flow of water, causing it to back up in to neighborhoods.

Some take away messages from these revised flood risk maps are that homes along Whittier and East Scripps Crescent and eastern Mills Way that were formerly in the flood hazard zone are no longer and may be able to re-negotiate their homeowner’s insurance. Flood reduction benefits in the western portion of NCOS are not as significant for two reasons: The majority of those benefits were secured back in 2010 when Phelps Creek was widened and the ‘pre project map’ (Figure 1) reflects the benefits of that restoration already and secondly, less soil was excavated from the western arm of the project in order to be adaptive to sea level rise by providing a refugia for salt marsh habitats that might otherwise be under water under future scenarios. 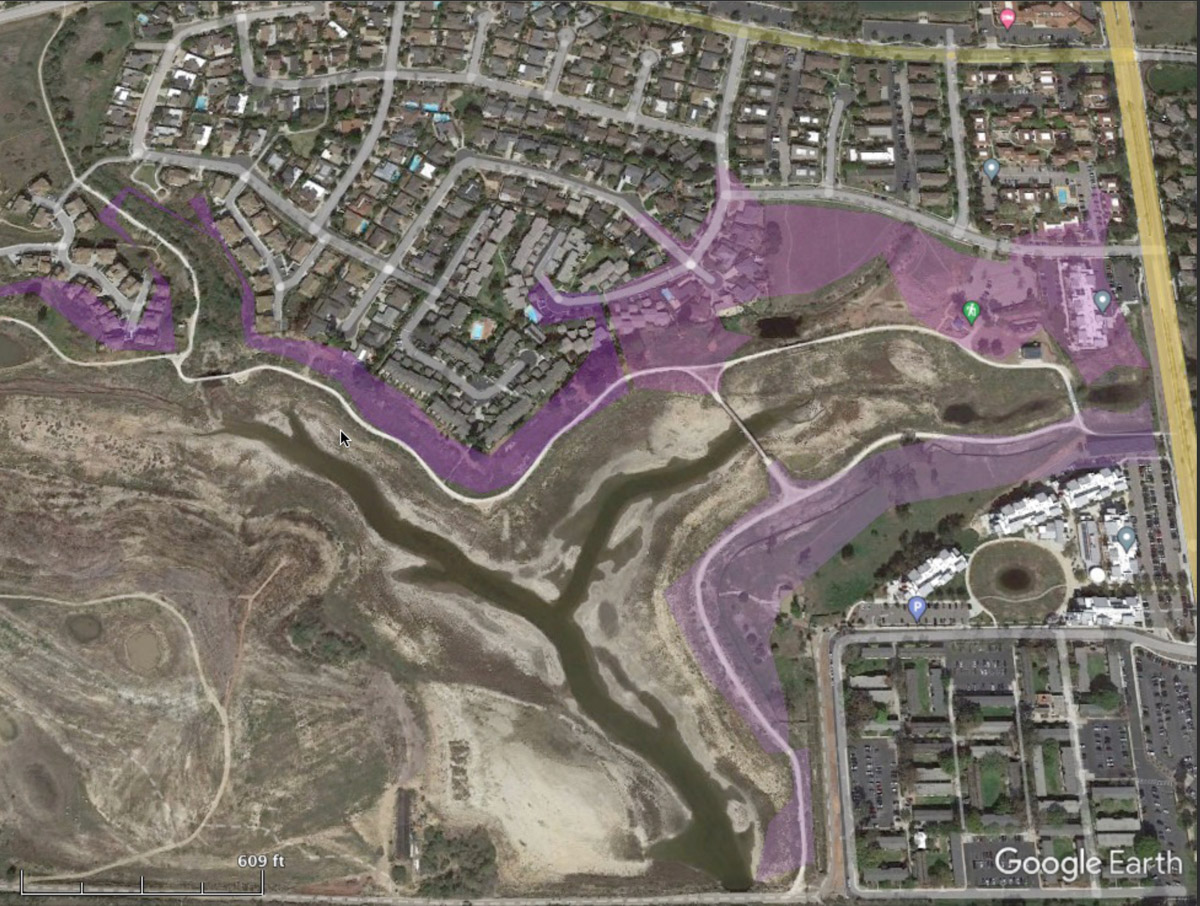 The perpendicular cross section lines – like F in the revised map (Figure 2) in the western arm has the number “14.0” by it. Note that in the pre-project map that same line has 16.4 next to it. As you compare these cross sectional lines between the maps they illustarate the feet above sea level of the flood hazard zone and you will notice that they are almost all 2+ feet lower in the revised maps. So, not only is the aerial extent subject to flooding reduced but the elevation of the flooded area is lower as well. An estimated 24 acres were removed from the flood hazard zone as shown by the purple zone in figure 3.
This restoration clearly reveals how these projects can address flooding issues created by the past filling of wetlands. In addition, wetland restoration projects can help reduce the risks associated with the increased storm intensity predicted to come with climate change. Benefits to our health and well-being through public trails and community are complemented by the complex benefits provided by the support for biodiversity which help stabilize our world in ways we may not even understand yet.
Date:
Tuesday, September 28, 2021 - 14:45