A Great Blue Heron and several Great and Snowy Egrets foraging at NCOS.

At NCOS, CCBER has been collaborating with local ornithologists to conduct systematic monthly surveys of birds on the project site. These surveys are a key element of the monitoring plan of the restoration project since the types and numbers of birds inhabiting or visiting a site like NCOS can be an important indicator of the health of a habitat or ecosystem, including its ability to support biodiversity and ecological functions. In addition, NCOS is an extension of Devereux Slough, which is an important habitat for many resident and migratory birds, and consequently a very popular birding spot. Therefore, Devereux Slough and Coal Oil Point Reserve are a key reference site for most of the types of birds that are expected to be seen at NCOS as the restoration progresses.

This month marks one year since the NCOS bird surveys began, and we’ve tallied up the numbers to see what the trends are so far and compared the numbers with data from similar monthly surveys conducted at Devereux Slough and Coal Oil Point Reserve (COPR). We've also compiled a list of all species observed during the monthly surveys, and created an interactive map where you can view some of the information collected for each observation. More information about the NCOS Bird List and interactive map are availble on the NCOS page. A map of observations from monthly bird surveys at NCOS from September 2017 through August 2018. The points on the map are color coded by guild. Visit the NCOS page for more information.

As of the August 2018 survey, 106 species have been observed on NCOS during the monthly surveys. The most abundant and diverse groups, or guilds, of birds observed include Insectivores (e.g. Swallows, Phoebes, some Sparrows, and Woodpeckers), Waders & Shorebirds (e.g. Plovers and Sandpipers), Granivores (e.g. Finches and Pigeons), and Ducks & Geese. These same groups were also the most abundant at Devereux Slough/COPR, yet the abundance of Ducks & Geese and Waders & Shorebirds was twice that at NCOS, while Granivores and Insectivores were more abundant at NCOS than at COPR (view a list of the species grouped by guild for NCOS here, and click here for a COPR list). 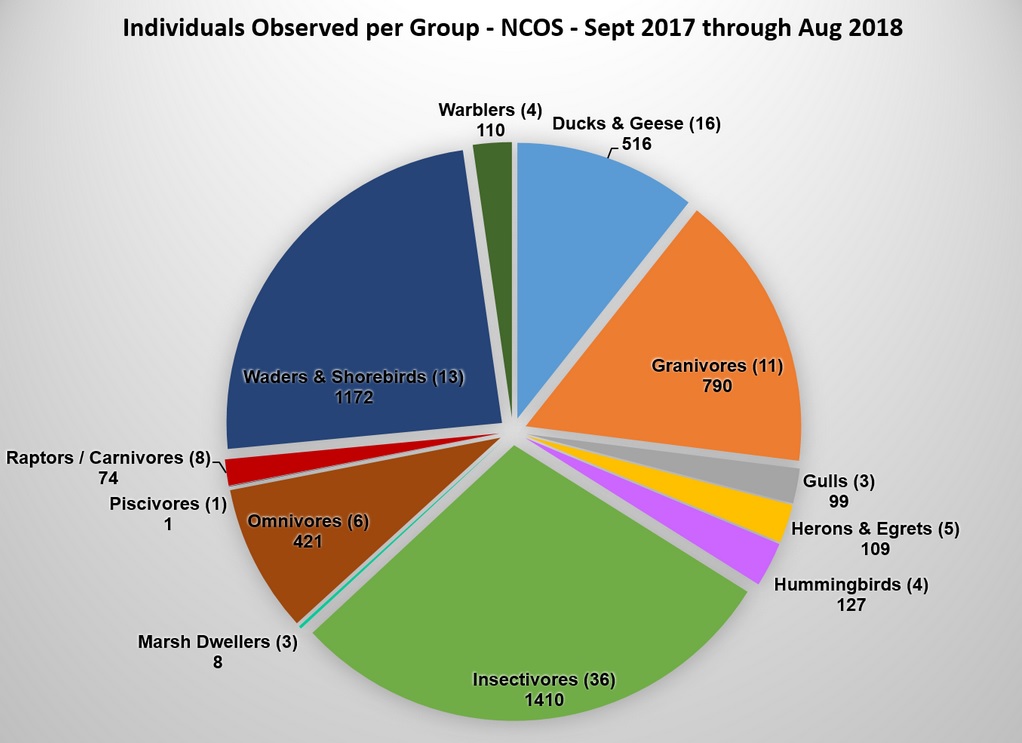 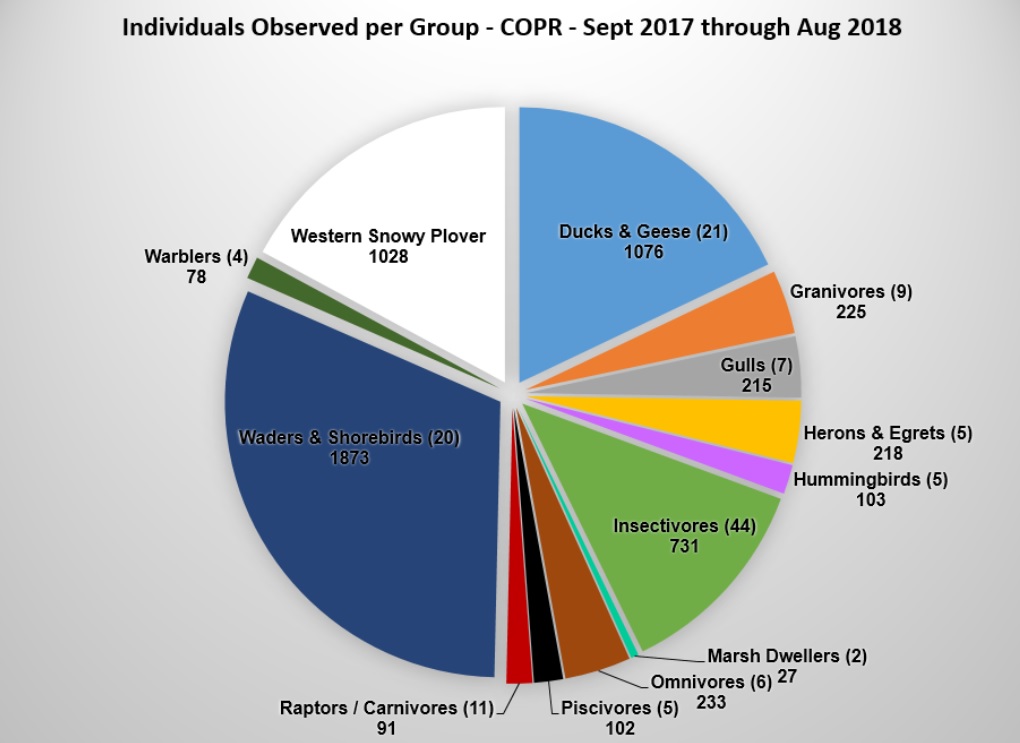 Pie charts showing the proportion of bird observations by guild for monthly surveys from September 2017 through August 2018 at North Campus Open Space (top) and Coal Oil Point Reserve (bottom). The numbers in parenthesis next to each guild name are the number of species observed in that guild, and the numbers below the guild name are the total individuals counted across all surveys.

One reason for the greater abundance of Waders & Shorebirds at COPR is the beach habitat, where Western Snowy Plovers and other beach associated species, such as Sanderlings, are highly abundant. We may see some of these species at NCOS, but not near the numbers that inhabit the beach at the mouth of Devereux Slough. The high numbers of Granivores on NCOS is a response to the erosion control measures implemented in September 2017, when 30 acres were hydroseeded with a sterile wheat seed. We expect Granivore numbers to drop now that those seeds have been consumed or have germinated.

Bar chart comparing the number of species observed in each guild at North Campus Open Space (NCOS) and Coal Oil Point Reserve (COPR) during monthly surveys from September 2017 through August 2018.

The substrate, or habitat type that birds are observed on is also being recorded for the NCOS surveys. Over the past year, it is not surprising that more birds were recorded on "Bare ground" than any other substrate type. This might explain the high numbers of Killdeer, which were the most abundant and observed most often at NCOS. Killdeer prefer open areas with short grassland vegetation, so we expect their numbers may change over time as more restored vegetation becomes established.

This synopsis does not account for incidental observations such as the copulating pair of Western Snowy Plovers seen in May, or occassional visits by Peregrine Falcons. As the restoration project continues, and the landscape evolves, NCOS will likely support different species over time. Perhaps at this time next year we will present a different, possibly more diverse or dynamic picture of the birdlife at NCOS.