Last spring through summer (2016), the Cheadle Center for Biodiversity and Ecological Restoration (CCBER) set out insect traps in the North Campus Open Space to map the distribution of arthropods. Arthropods are small, segmented invertebrates such as insects, spiders, and crustaceans. The traps were left out for 1-7 days at a time in six different generalized habitats: Salt Marsh, Willow-Cottonwood, Mixed Annual Grasses, Fennel, Lawn, and Upland Marsh. All of the captured arthropods were preserved in ethanol before being identified and sorted to the order taxonomic level under a microscope.

My Coastal Fund Internship during Winter 2017 focused on counting the numbder of individuals collected for two of these orders: Archaeognatha (photo below by Bruce Marlin), a small, shrimp-shaped land-dwelling insect, and Isopoda (photo below by André Karwath), the order commonly referred to as pill bugs or wood lice. In addition, I also identified Isopoda to the taxonomic family level. 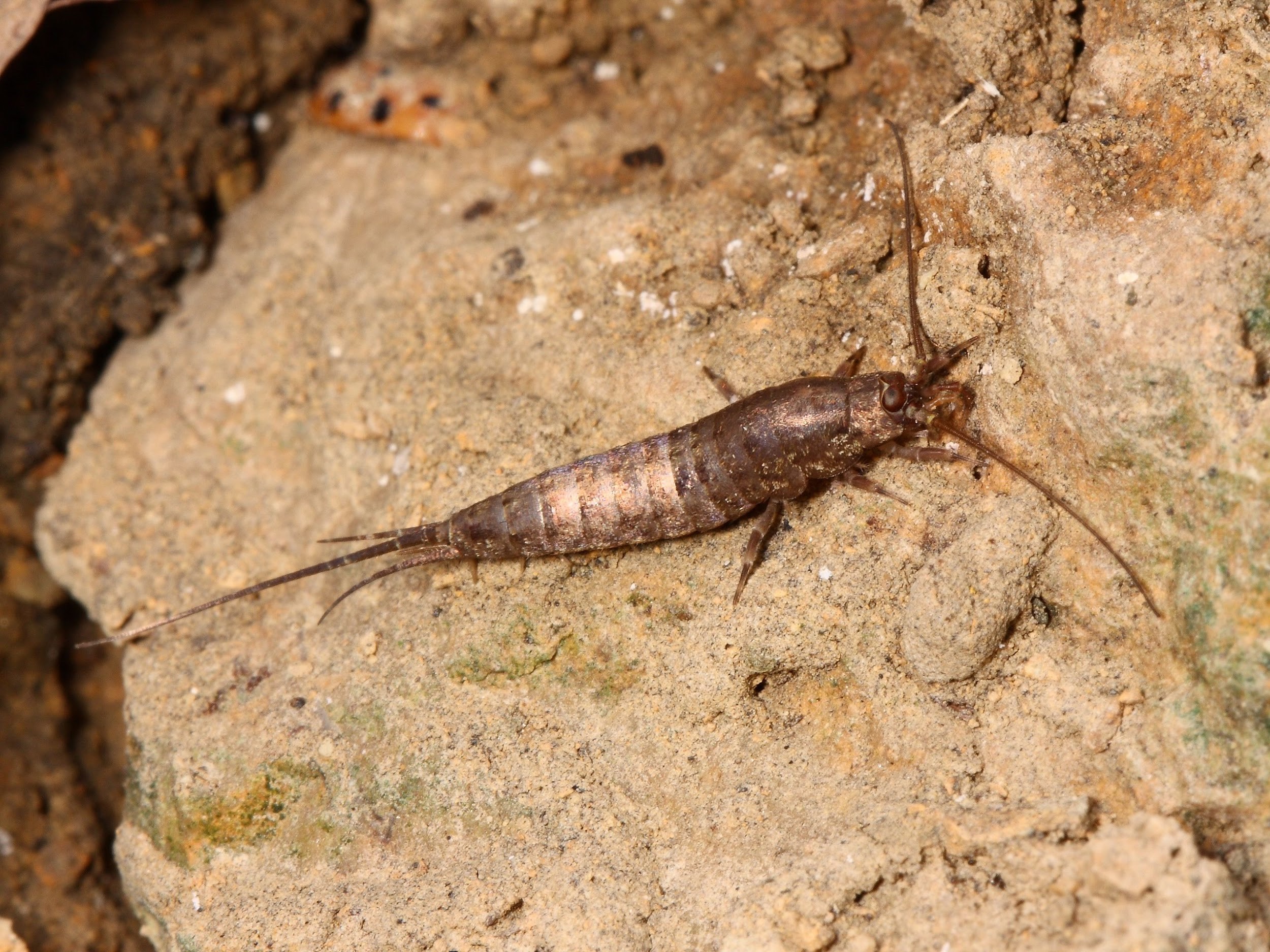 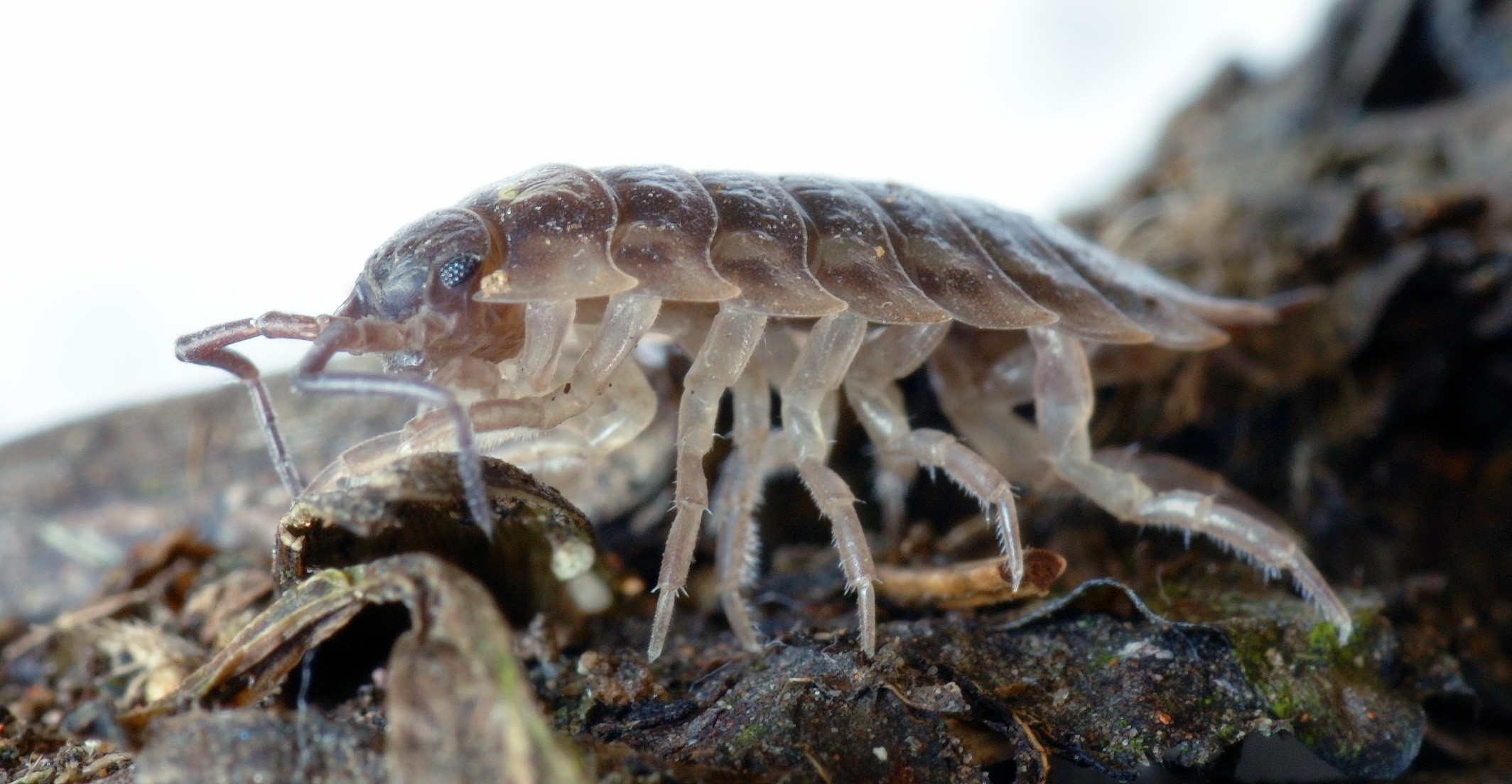 Both species of isopods we found in this study are not native to the United States. They originated in Europe, but have been spread across the Americas by human activity (Muchmore, 1990). Armadillidium is well known for rolling into balls when threatened or disturbed; Porcellio doesn’t have this ability, but relies on its scales, flattened body and speed to escape predation (Castillo, 2005). After mating, both Porcellio and Armadillidium eggs remain in a pouch in the female stomach until hatching, and have similar body structure upon birth, though they lack pigmentation, and are a pale, translucent white (Muchmore, 1990).

Isopods are omnivores or scavengers, and typically eat decaying plant and animal material, though they also can eat live plants (Muchmore, 1990). Because they help decompose organic waste, they can be very beneficial in ecosystems, increasing the levels of nutrients such as phosphorus, potassium and nitrate in the soil (Frouz, 2008). In addition, a number of different vertebrate and invertebrate predators feed on Isopoda (Muchmore, 1990). 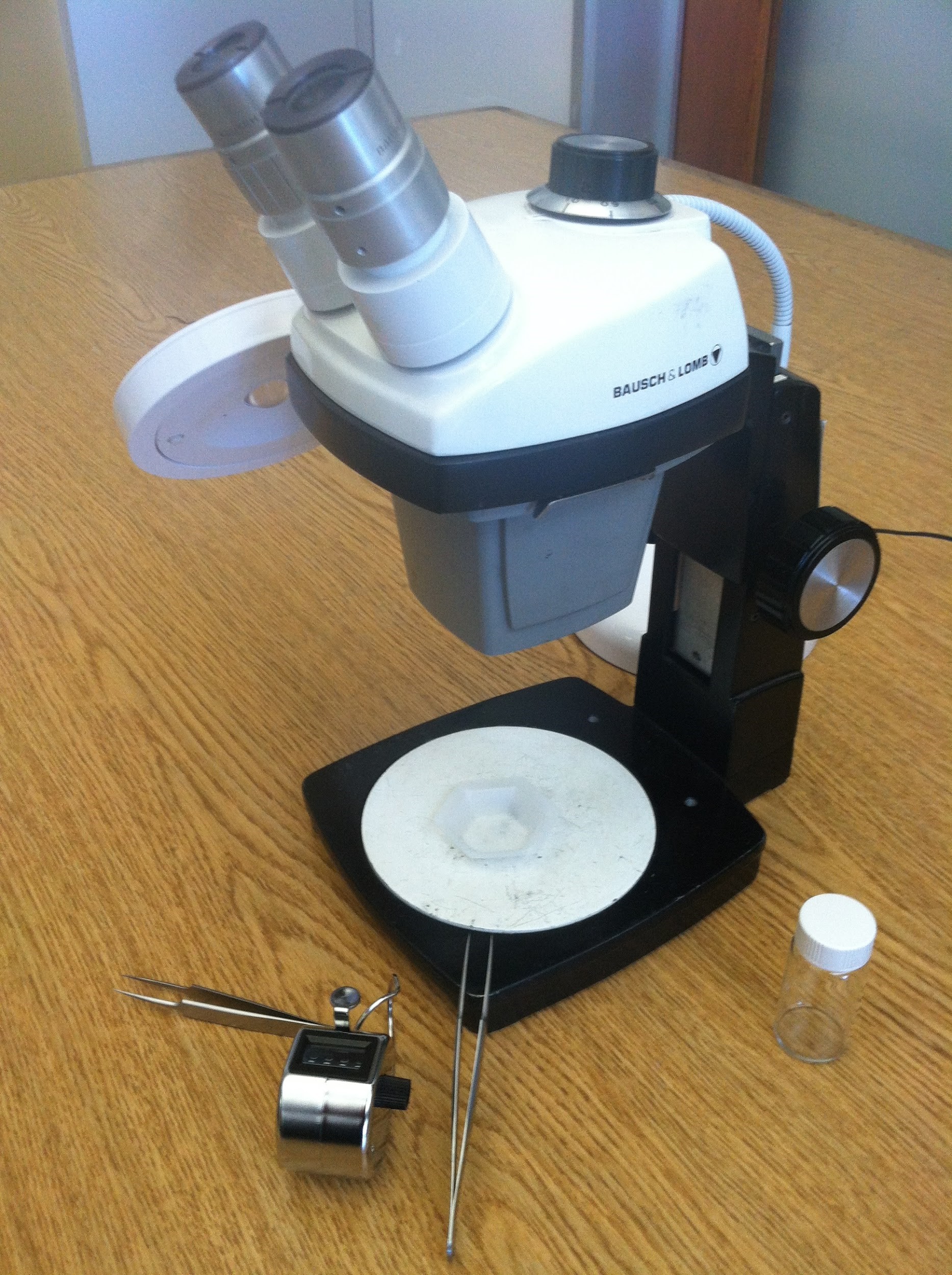 The counting and identification of the arthropods is done under a microscope with the help of metal tweezers and a click counter. The Archaeognatha are small and often numerous, while the Isopoda are relatively large and have lots of little hiding spaces between their legs and inside their shells for small arthropods, such as Collembola.

The biggest challenge with counting and sorting isopods is removing other insects and identifying the isopods to family. The guide used to identify the isopods to family is the Terrestrial Isopoda guide by William B. Muchmore (1990). The identifying features on Isopoda are the telson and uropods (tails) as well as the shape of the head. Two species of terrestrial isopods have been identified from the samples – Armadillidium vulgare, commonly known as the pillbug or "roly poly", and Porcellio scaber, the woodlouse. Armadillidium vulgare have truncate angular telsons and uropods that don’t extend past the body, while the Porcellio have pointed telsons and uropods that extend out from the shell.

Porcellio is larger than Armadillidium, ranging up to 18 mm in length, while Armadillidium reaches 15 mm (Muchmore, 1990). From the samples, the Armadillidium are typically 9-13 mm long, but the two Porcellio have been 17 and 19 mm long and almost twice as wide as the Armadillidium. As a result, size has been an easy visual indicator of the different genera before they are examined under a microscope.

Across all of the samples Armadillidium vulgare is by far the most abundant of the two genera of Isopoda. At this point all but two of the 1103 isopods recorded have been Armadillidium. Almost 90% of the isopods were caught during April, in large part due to one pitfall trap in the Annual Grasslands habitat that had over 650 isopods. Of the three habitats counted to date, no isopods were caught in the Salt Marsh traps, 153 were recorded in the Willow Cottonwood traps, and 950 were recorded in the Annual Grasslands. The isopods were found in significant numbers in both the pit fall traps (880) and the yellow pan traps (223), but the largest population was in a pitfall trap. Only two Porcellio have so far been recorded; both were found in the same Annual Grasslands pitfall trap sample that also contained over 600 Armadillidium. Juveniles have been found in the samples from April through July.

The complete data on Isopoda has yet to be fully compiled, but the data recorded so far poses some interesting questions. Well over half of the isopods caught were found in one trap over a six day period in the middle of April. A yellow pan trap set out for two days during that time period in the same habitat had no isopods. A pit trap set in the Cottonwood habitat a week later, on April 25-28, caught 111 Armadillidium, 88 of which were juveniles. The number of young alive in the month of April may be raising the numbers for that month, though 474 of the 650 in the largest trap were adults. A factor such as mating or weather may likely motivate the isopods to move around more in the Spring months, making them more susceptible to falling into traps.

The North Campus Open Space has a significant population of terrestrial isopods, especially in the Annual Grasslands and Willow Cottonwood habitats. The majority of isopods were found during the month of April, though small amounts have also been caught during the summer months of June and July. Armadillidium vulgare has dominated the isopod populations in the samples counted, but two Porcellio scaber have also been found.

Archaeognatha were found across all six of the habitats tested, but the majority were located in the Fennel and Annual Grasses locations. The largest number of Archaeognatha were caught during the month of May, and they were found in significant numbers from April through July.

Terrestrial Isopods, which include Armadillidium and Porcellio, are crustaceans, related to crabs, lobsters, and shrimp, and are the only large group of crustaceans adapted to life on land, and can be found far inland, away from any large body of water (Muchmore, 1990). As a result, both genera need relatively moderate temperatures and moisture, and are usually nocturnal (Muchmore, 1990). Armadillidium is better at conserving water than Porcellio (Bursell, 1955), and it will be interesting to see if that plays a role in the distribution of these species as we continue examining trap samples. The traps are stationary, so the insects must go to the traps in order to be caught and observed, and differences in desiccation rates could also cause differences in mobility and lower the possibility of a Porcellio falling into a trap.