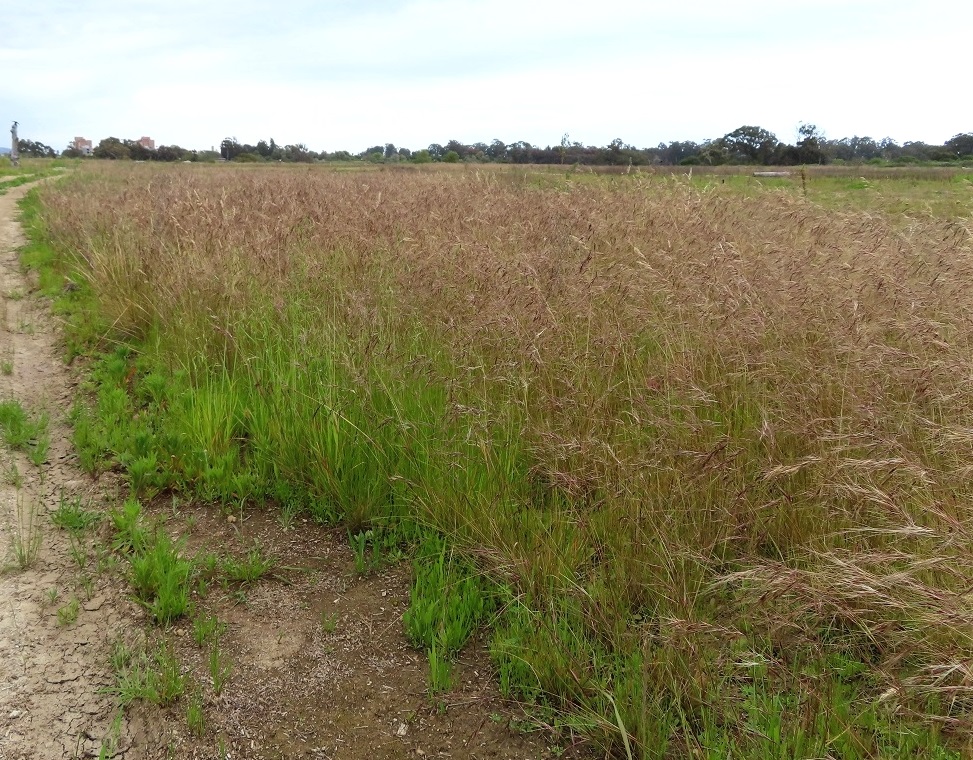 A recent photograph of the Purple Needle Grass (Stipa pulchra) perennial bunch grassland on the NCOS Mesa.
Perennial bunch grasslands are becoming increasingly rare in California, and diverse grasslands that contain populations of flowering forbs and herbs (a.k.a. wildflowers) are even more rare. Habitat restoration projects like UCSB's North Campus Open Space (NCOS) are working to curb that trend. More than 15 acres of native perennial grassland has been planted on the NCOS Mesa. The majority of this grassland was established using a no-till seed drill to sow hundreds of thousands of locally sourced seeds of Purple Needle Grass (Stipa pulchra), a tussock or bunch grass that is the state grass of California. 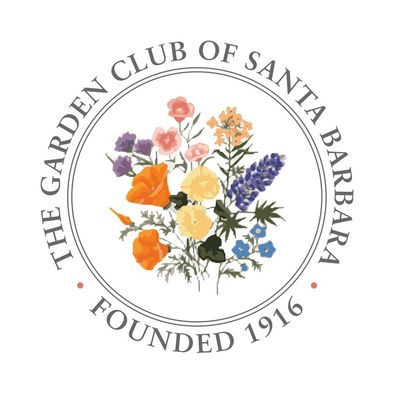 CCBER has collected seeds from local populations of at least twenty native species of herbs and forbs to add to the Mesa grassland. Many of these species are small and ephemeral, which makes seed collection challenging. Consequently, the limited number of collected seeds were too valuable to spread across the entire grassland with the hope that the plants would establish on their own. In addition, studies have found that dispersed seeds can be consumed by herbivores (e.g. birds, rodents and some insects) and may not receive cues in nature that are suitable to germination and establishment. When seed is limited, it may be necessary to invest in establishing an initial population of a species on site using one or more interventions such as: placing a cage over the seeded area to reduce herbivory of seeds and young plants, pre-treating the seeds of certain species to stimulate germination, irrigation, and/or planting seedlings of longer-lived plants in order to guarantee that some plants will establish and disperse their seeds. Therefore, to determine the most effective methods for diversifying the Mesa grassland, CCBER staff and student interns recently conducted two sets of experiments that employed combinations of the aforementioned factors, along with four areas of broader dispersal of species for which sufficient seeds were available. This project was made possible with special funding from the Garden Club of Santa Barbara.

Experimental Plots: Seeds vs. Seedlings, Treated vs. Untreated, and Caged vs. Uncaged

Three of the factors that could influence plant germination and establishment were tested in two sets of experimental plots. One set of plots was installed in the eastern area of the Mesa, where clay soil dominates. The focus here was to assess the potential value of planting seedlings compared to spreading seeds as well as whether caging reduced herbivory. These factors were tested on seven larger, longer-living species tolerant to and/or adapted to clay soils: Cobweb Thistle (Cirsium occidentale), California poppy (Eschscholzia californica), California buttercup (Ranunculus californicus), Sharptooth sanicle or snakeroot (Sanicula arguta), California figwort (Scrophularia californica), Praire Mallow or Checkerbloom (Sidalcea malviflora), and Blue-eyed Grass (Sisyrinchium bellum).
The other set of plots was installed in an area of sandy soil along the west facing slope of the Mesa. The effect of caging on herbivory was also tested at these western plots as well as the effect of pre-treating seeds in order to stimulate germination by scarification and/or soaking. The treatment was applied to the seeds of three species: Miniature lupine (Lupinus bicolor), Succulent lupine (Lupinus succulentus), and Blue-eyed grass (Sisyrinchium bellum), and these were spread along with the seeds of five other species associated with sandy soils: Acmispon wrangelianus, Nuttall’s Snapdragon (Antirrhinum nuttalianum), Owl’s Clover (Castilleja densiflora), Redmaids (Calandrinia menziesii), and Toadflax (Nuttalanthus texana). 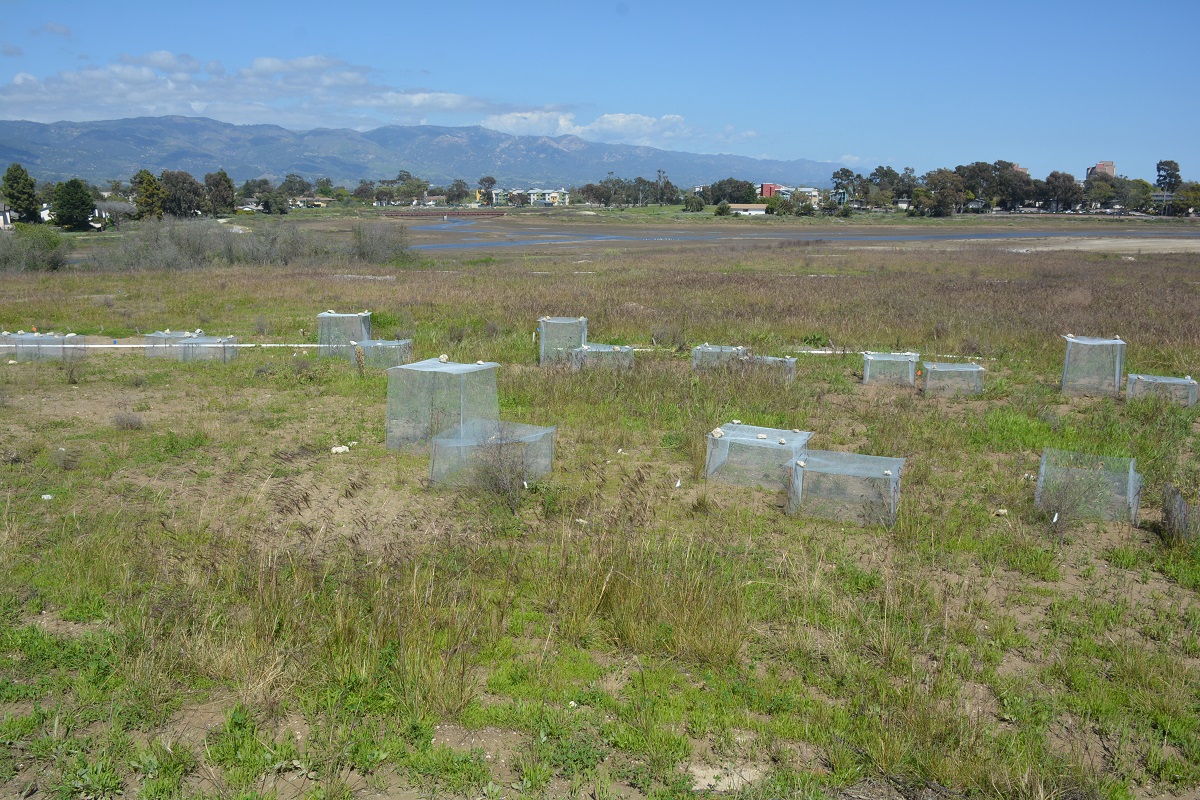 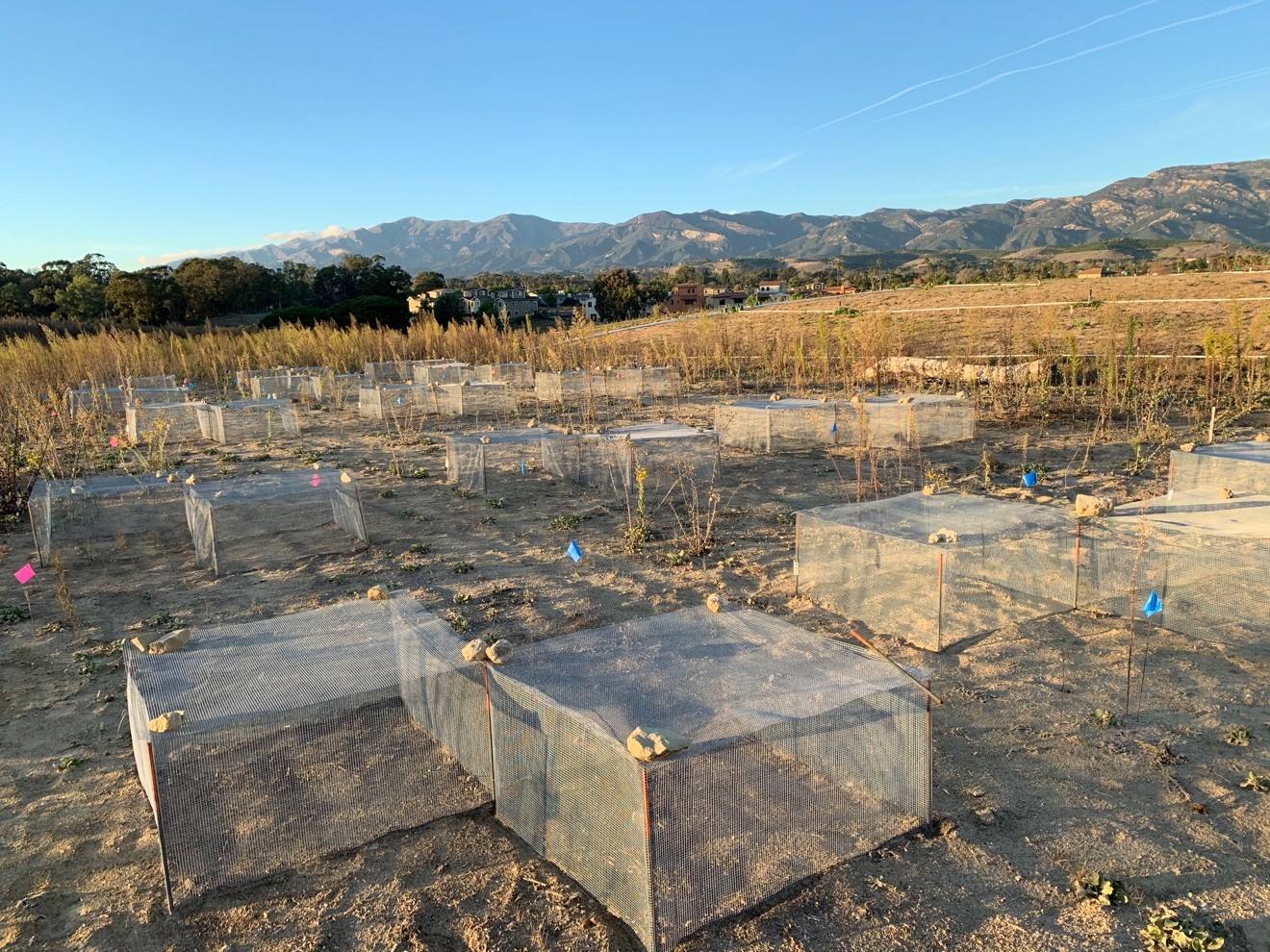 Experimental plots with cages on the eastern slope (left image) and sandy soils on the western side (right image) of the NCOS Mesa.

All of the plots were installed and seeds spread in late November to early December last year (2019). The seedlings in the eastern plots were planted by mid-December. CCBER staff and interns have conducted monitoring and weeding of the plots on a monthly basis since January.
As of June, the number of plants present in the eastern plots show that, of the seven species, only Cirsium occidentale exhibited more success from seeds than from seedlings, and caging had only a marginal benefit for most of the species. These results suggest that planting seedlings of these wildflower species in the grassland in winter may be the most effective way to establish populations, except for Cobweb thistle the seeds can be dispersed throughout the site. 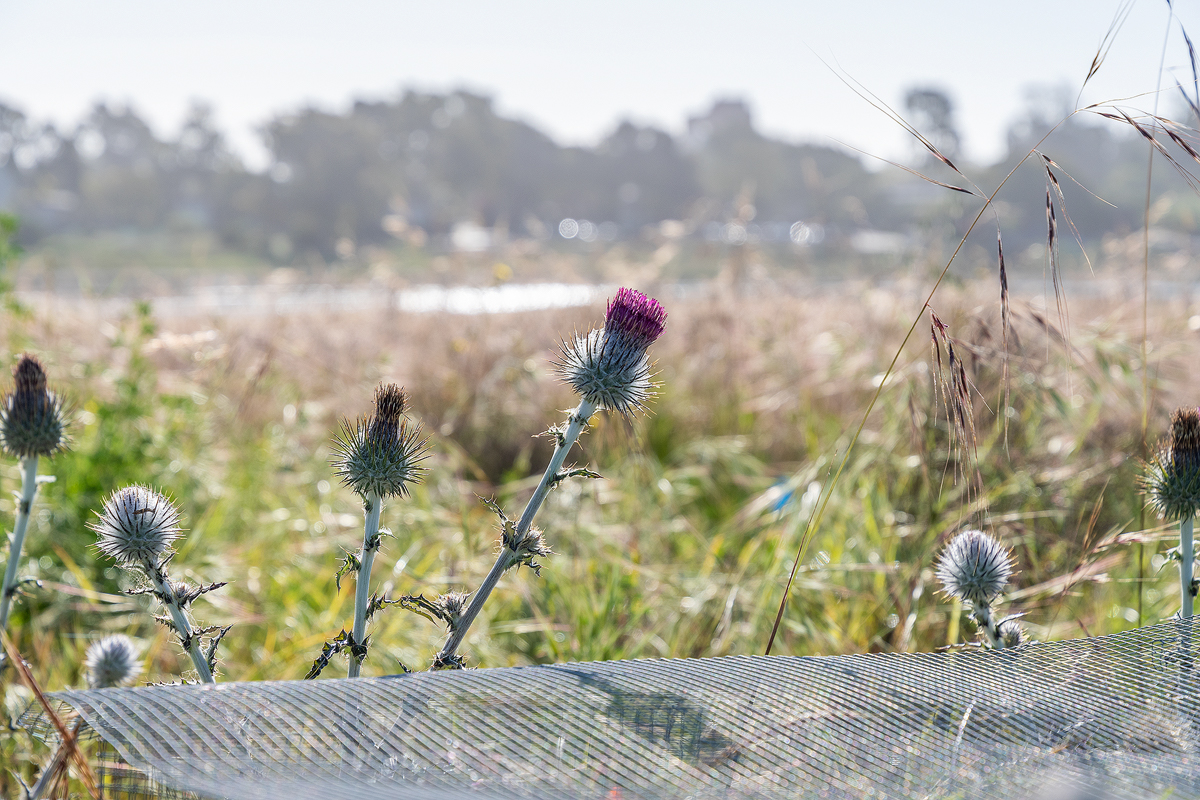 Cobweb Thistle (Cirsium occidentale) in the seeds vs. seedlings experimental plot on the eastern slope of the Mesa grassland.
In the western plots, nitrogen fixing species such as the two lupines and Acmispon wrangelianus were the most successful in the sandy soil, along with the surprising success of the hemi-parasitic Owl’s Clover (Castilleja densiflora). Treatment of seeds with scarification or soaking (for Sisyrinchium bellum) only conferred a clear benefit for the germination of Lupinus succulentus, but germination for the untreated seeds was also relatively successful. Caging did confer some benefit for both Castilleja densiflora and Lupinus succulentus but not to Lupinus bicolor, Acmispon wrangelianus, or Nuttalanthus texana. There was no germination observed for Antirrhinum nuttallanthus, Sisyrinchium bellum and Calandrinia menziesii. The species that did not germinate may not have had suitable conditions or received suitable germination cues in the field and may benefit from planting out as seedlings initially. Overall, caging does not appear to be vital to the long term persistence of the seedlings that survived. A report with more details on these experiments will be available soon. 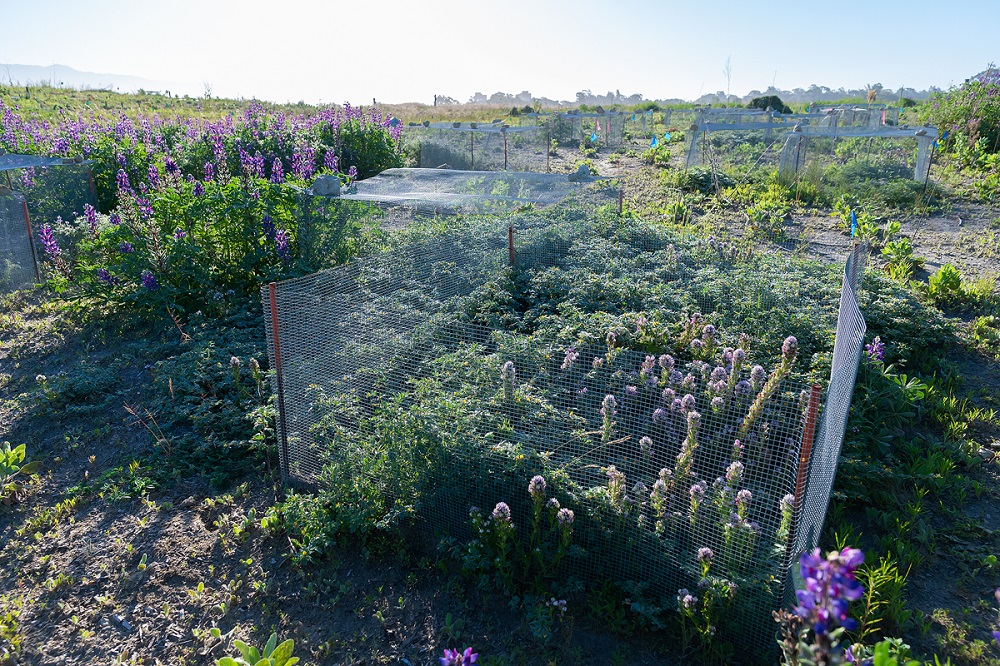 View of the wildflower experiment plots on the western side of the Mesa in May. 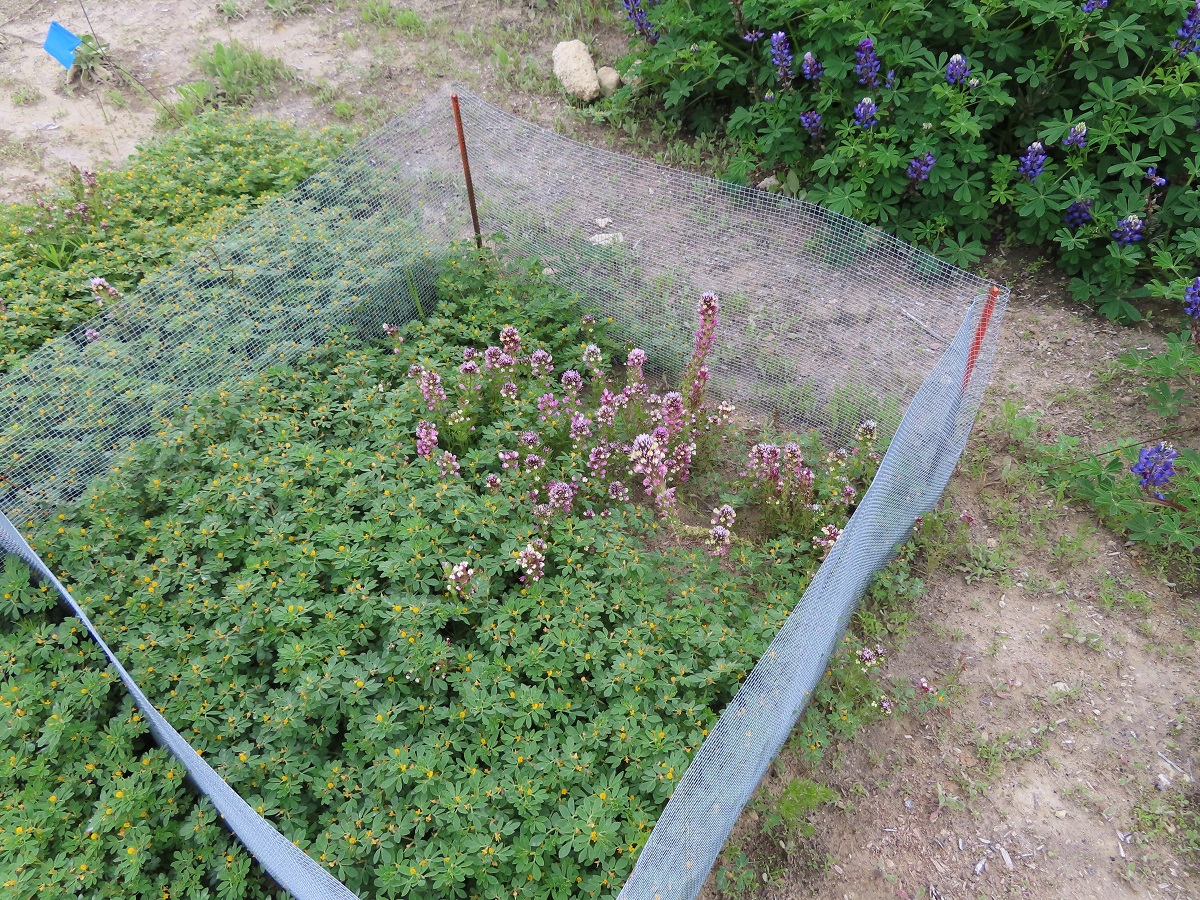 Acmispon wrangelianus (left side), Castilleja densiflora (center), and Lupinus succulentus (upper right) all grew well in the experimental plots on the western side of the NCOS Mesa. 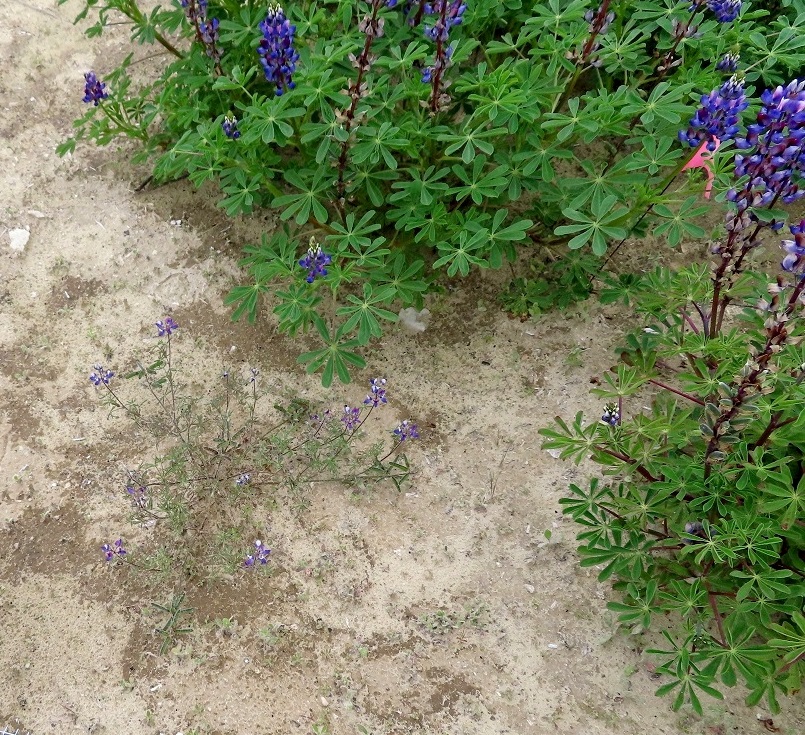 Lupinus bicolor (lower left) and Lupinus succulentus growing in the wildflower experiment plots on the western side of the NCOS Mesa. 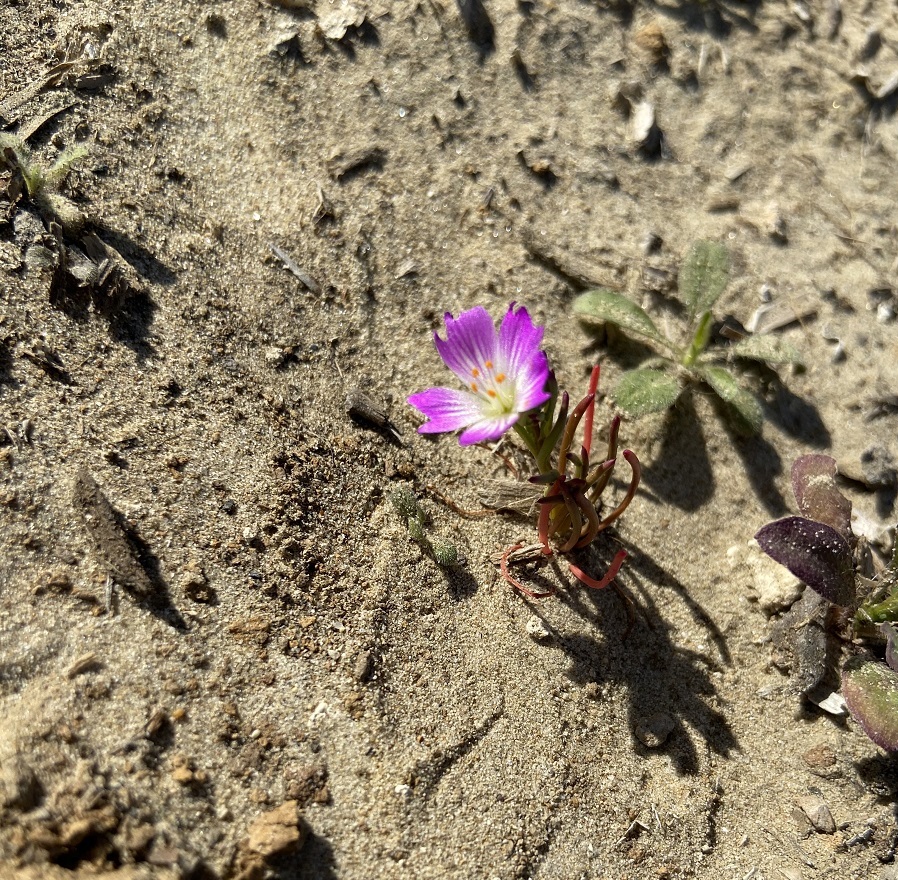 For some of the wildflower species, we had collected a supply of seeds that was sufficient enough to allow for broadcast seeding. This was done in four large plots, two in the western sandy soil zone and two in the clay dominated soil on the eastern slope of the Mesa. In the western plots, the sandy soil was raked 1-2 inches deep prior to scattering seeds of the following species:
In the eastern plots, seeds of Calandrinia menziesii and Plantago erecta were scattered on the clay soil. Seeds were scattered in all four plots prior to a rain event on December 3, 2019.
A Calandrinia menziesii in bloom on the NCOS Mesa.
In addition, with significant volumes of seeds collected for several species, including asters that are known to have a relatively short lifespan in storage, we spread many of these more broadly in appropriate areas of the Mesa prior to rain events in December and January:

The annual vegetation monitoring of the Mesa grassland will be conducted this summer, and we anticipate that the data will show the presence of at least some of these species. Once we have that data, we'll be sure to post an update on the progress of the diversification of the Mesa grassland.