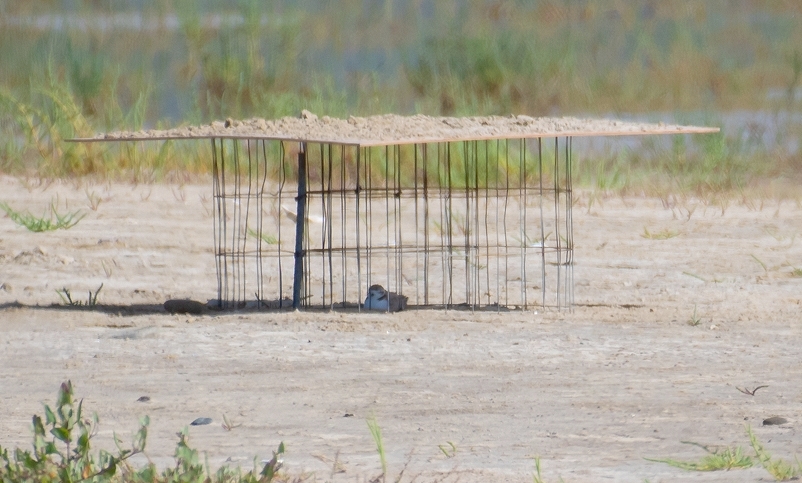 A Western Snowy Plover at NCOS incubates its nest under an exclosure designed to prevent predation by Crows and Owls.

The threatened Western Snowy Plover faces many challenges when attempting to successfully reproduce. One of those challenges is a shortage of safe, suitable nesting habitat, much of which has disappeared or is under threat from human development, recreation, and sea-level rise. The NCOS restoration project created a new nesting habitat for the plovers, augmenting the existing habitat on the neighboring Coal Oil Point Reserve (COPR). In the future, this new nesting habitat could become a refuge should the beach habitat at COPR become threatened by sea level rise. Last year, at least one nesting attempt was observed on this new habitat at NCOS, and more attempts have occurred this year.

While nesting habitats can be protected from human disturbance by installing fencing and signage, plover nests and chicks are still vulnerable to predators such as crows, ravens, owls, hawks, and skunks. Once these predators discover a nest, they usually go back, scanning for more, and are capable of eating all plover eggs and chicks available. These predators are native to California but in some cases their numbers may be higher than normal because they tend to thrive well in human dominated environments. Crows overpopulate cities because they exploit trash and steal pet food. Owls and hawks feed on plovers and use the non-native Eucalyptus and Cypress trees to perch and nest near plover breeding sites.

One method to help protect the plover nests is to create an "exclosure" - a mesh structure that surrounds the nest and allows the plovers to get in and out, but excludes larger predators. These exclosures have been used at Coal Oil Point Reserve (COPR) in the past to reduce crow predation but an unwanted outcome was that owls learned to sneak up on the plovers and grab them through the mesh when they were trying to flee. 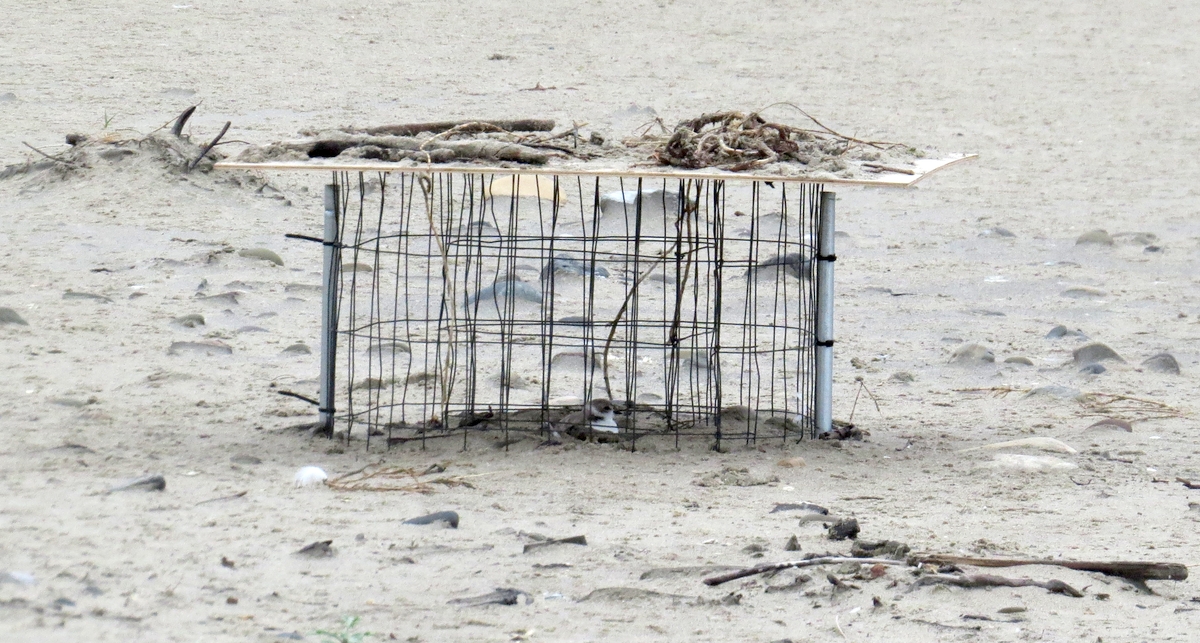 A Western Snowy Plover on its nest under a re-designed exclosure near the beach at Coal Oil Point Reserve.

This breeding season, crow predation on plover eggs has been so intense on COPR and NCOS that something creative needed to be done or the plovers would not be able to reproduce successfully. The exclosure was re-designed to make it more owl-proof: with double-walls so the plover parent had time to choose the best exit if an owl approached and with a solid roof so the owls could not see the plover from above. The experiment appeared to be working since nests in the modified exclosures have not been predated on by crows or owls, however baby skunks appear to have been slim enough to fit through the plover-sized mesh and consume another round of egg laying on the NCOS and Slough nesting areas. In addition, and unfortunately, at the beach nesting area, large waves, just before the 4th of July washed away the majority of nests on the beach.

It has been a challenging breeding season for this special bird at COPR and NCOS. This is in stark contrast to last year's breeding season - the most successful for the plovers at COPR since the recovery program began (more details in the 2018 COPR Newsletter). Due to this variability, the success of recovery efforts is measured by the average number of chicks fledged at several beaches and by the average number fledged across many years for each site. As long as these averages are increasing over time, the populations are recovering. Currently, the overall population of Western Snowy Plovers across their entire Pacific Coast range is increasing.