UCSB's Cheadle Center for Biodiversity and Ecological Restoration (CCBER) has been conducting comprehensive monthly bird surveys of the North Campus Open Space restoration site since September 2017. These surveys are designed to be objective and scientific, and are conducted using a consistent methodology. The key components of the methodology are:

Other details that are recorded include the weather conditions at the start and end of the survey, whether the bird(s) may have been observed earlier in the survey, and when possible, the age and/or sex of the bird(s) and any breeding behavior or activity.

By conducting the surveys this way, we limit the number and effects of different variables that we can't control and that could influence the birds we would observe. In addition, we are able to collect a large amount of data that can be used in a variety of analyses without requiring much additional effort to clean and vet or verify the data. 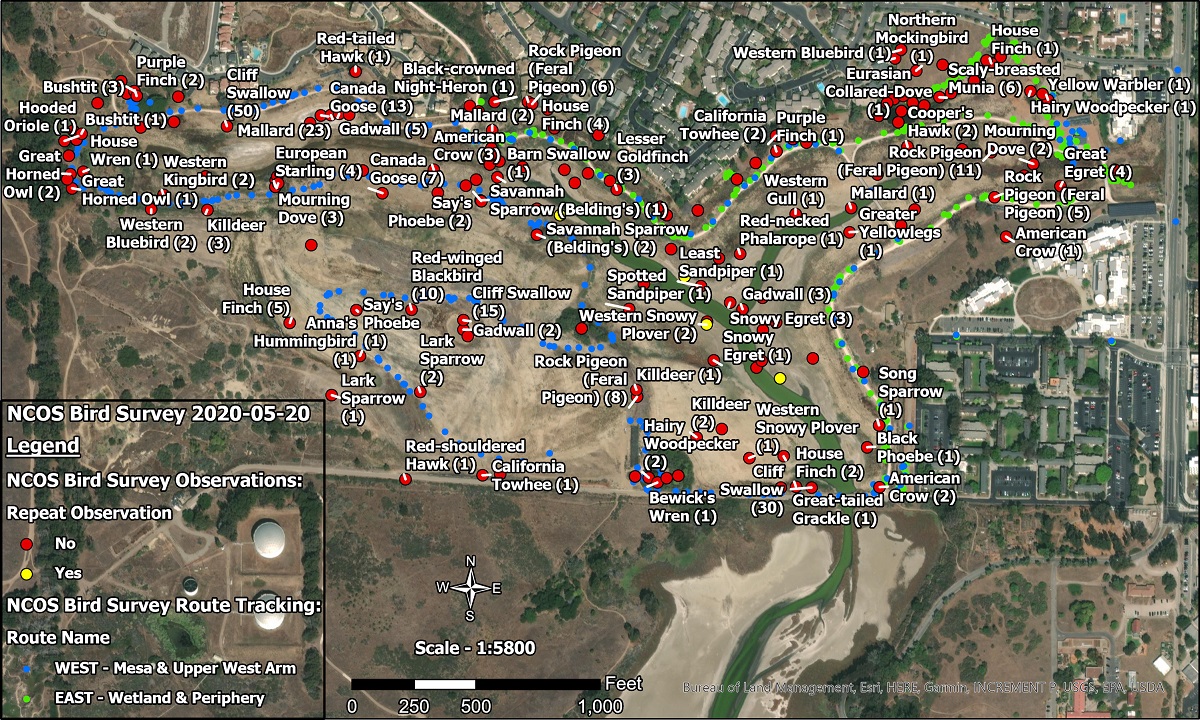 Map of the data collected during one of CCBER's monthly bird surveys of the UCSB North Campus Open Space, on May 20, 2020.

However, there are limitations to these surveys. For example, since the surveys are conducted once a month, we may miss unique or rare species that only briefly visit the site during migration. By conducting the surveys only in the morning, it is likely that we will miss species that tend to visit the site (or are more likely to be detected) in the afternoon or evening.

This is where citizen science can help fill in the gaps. Thanks to the growth and ease of use of online databases and apps such as eBird and iNaturalist, everyone who wants to can share their bird and other wildlife observations with the world. Bird observations by community members visiting NCOS that are uploaded to those online databases can be used along with CCBER's monthly survey data to get a more complete picture or story of bird presence, abundance, diversity, and habitat use at NCOS.

We extracted bird observation data from NCOS that has been uploaded to eBird and iNaturalist, and compiled some basic statistics to look at general trends in 2018, 2019, and 2020. Looking at the data in the table below, we see a couple of clear trends. One is the yearly increase in the abundance and diversity of birds as well as the number of community members out birding and reporting their observations to eBird and iNaturalist! The second clear trend is that CCBER's monthly surveys do not appear to detect a yearly increase in bird diversity, even though there are new species observed each year, as indicated by the overall number of species.

A couple of additional notes about the data in the table: Observations uploaded to iNaturalist are typically of one individual bird, so we did not summarize the average count for that data. The observation events reported to eBird are categorized as Incidental, Stationary (birding from one spot), or Traveling (birding while walking a route), the latter of which accounts for the majority (about 90%) of the data. We considered only the Traveling observations for the average count of the eBird data in the table.

Table of the number of bird species, unique observers. unique observation event, and average of birds counted across observation events at North Campus Open Space reported on eBird, iNaturalist, and by CCBER's monthly surveys in 2018, 2019, and 2020. The species numbers in parentheses include birds that were not completely identified to species level and hybrids. The true number of identified species is to the left of the parentheses. * The Average Count data for eBird considers only "Traveling" observation events ("Incidental" and "Stationary" are excluded), and na is entered for iNaturalist because counts are typically one indidvidual bird.

The summary table above also highlights that the CCBER surveys record a lot more birds on average than the observational events reported to eBird (see the Average Count row in the table). The main reasons for this are that the CCBER surveys cover the same area each time, including parts of NCOS that are not normally accessible to the broader community, and the surveys are conducted by a relatively large team of observers for usually at least two hours. Observation events reported to eBird can vary widely in the area covered, the number of observers involved, the duration or amount of time, and the level of intensity or consistency of effort.

In addition, eBird data does not include specific locations (i.e. coordinates) for each bird observed during an event. The only spatial data on eBird is one point for the general area where an observation event occurred. This could be just a central point for NCOS or the start of the traveling route, which may have started at NCOS but then ended in another area such as Ellwood Preserve or Sands Beach. Unlike eBird, the observations on iNaturalist can also include the specific location of each bird seen. This is an important element of CCBER's monthly surveys and we use a GIS app to record the locations of birds on site as accurately as possible (for example, see the map image earlier in this story). This information helps us to understand how different parts of NCOS are functioning as habitat for different species.

The number of true species recorded in the eBird data is consistently greater than CCBER's monthly surveys by as much as 68 (55 %) in 2020, and 64 (42 %) overall. This makes it clear that there are many species not detected by CCBER's monthly surveys, and citizen science databases such as eBird and iNaturalist provide a great resource for determining what our surveys are missing and what the broader community is observing at NCOS.

We dug a little deeper into this and compared the eBird and CCBER data for each quarter of 2020, with species grouped into 14 "guilds". Comparing the two charts below, we can discern that eBird observations are recording more species in most categories, especially Terrestrial Insectivores (e.g. blackbirds, sparrows, woodpeckers, and wrens), Shorebirds, Warblers, and Waterfowl, as well as Pelicans, which have not yet been recorded by a CCBER survey. Both sets of data show similar trends in the quarterly fluctuation of species diversity, which is lowest in the summer and greatest in late fall and winter when there are more migratory birds passing through and also usually a greater amount of open water habitat available. 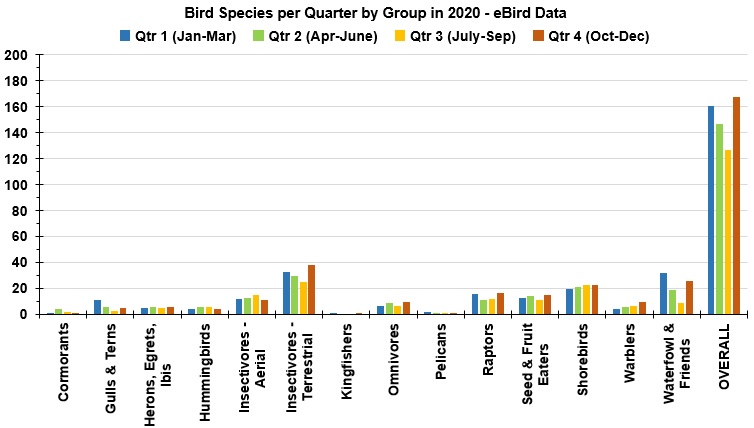 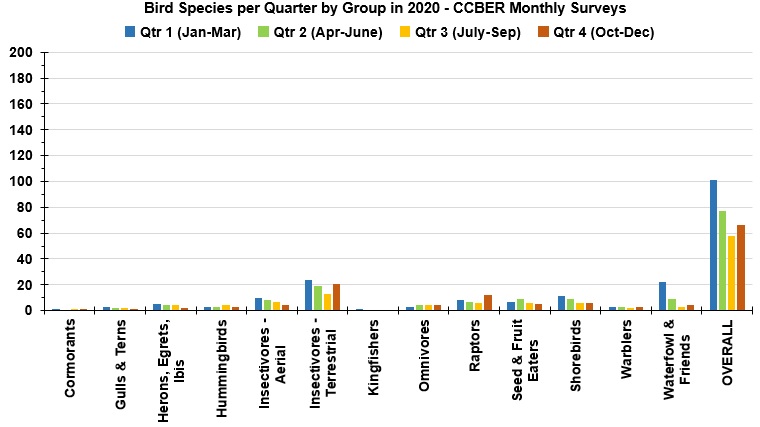 Bar charts of the number of species in 14 guilds recorded during surveys in each quarter of 2020 at North Campus Open Space (NCOS). The top chart is data from observation events reported to eBird and the bottom chart is data from monthly surveys conducted by the Cheadle Center for Biodiversity and Ecological Restoration (CCBER).

The main value of the data on eBird and iNaturalist is the record of rare, unusual, and/or cryptic species as well as birds that are more commonly active or visible in the afternoon or evening. Along with CCBER's monthly surveys, these citizen science databases provide valuable information that documents the growing benefits of the restoration of NCOS to both wildlife and people.

For further reading and a more detailed analysis of the CCBER monthly survey data, have a look at the North Campus Open Space year three monitoring report on CCBER's eScholarship site (https://escholarship.org/uc/item/7bq618m8). You can also view the eBird webpage for NCOS observations here: https://ebird.org/hotspot/L820867, and the iNaturalist NCOS page here: https://www.inaturalist.org/observations?place_id=151641&subview=map.

This story was written by Ryan Clark.