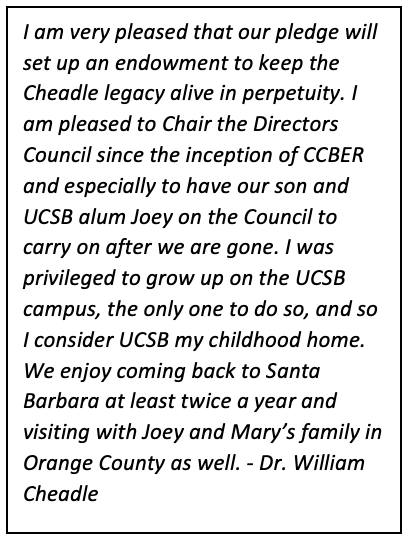 Having moved to Santa Barbara at 9 years old, Dr. William “Bill” Cheadle had the unique experience of growing up living on UCSB’s campus. As the son of Mary and Vernon Cheadle, UCSB’s Chancellor from 1962-1977, Bill’s early memories not only included his father’s leadership role during UCSB’s greatest period of growth, but perhaps more so, his deep passion for botany. A world-renowned botanist, Vernon began collecting, processing, and categorizing plants during his graduate and doctoral studies at Harvard from 1932-1936. After earning his PhD, Vernon did field work in Cuba then began his academic career at University of Rhode Island, followed by UC Davis. 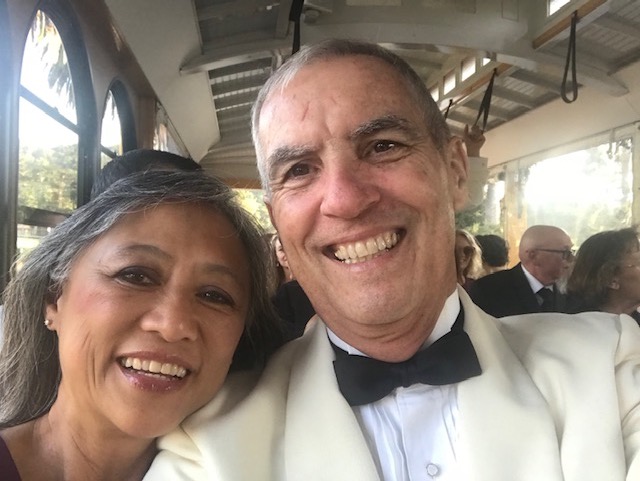 As part of his father’s Fulbright Fellowship, Bill joined his parents on an expedition around the world from 1959-1960, just prior to moving to Santa Barbara. They stopped in Fiji, New Zealand, Australia, South Africa, and London. The majority of Vernon Cheadle’s collection, now housed at the UCSB Herbarium within the Cheadle Center for Biodiversity and Ecological Restoration (CCBER), is from this time as a Fulbright Scholar. Initially housed in a small room in the Biology building, the then Museum of Systematics was founded in 1945 by Drs. Muller and Erikson and included Vernon’s collection of some 15,000 pressed and preserved plants and over 60,000 self-prepared slides. Now, with over half a million specimens, the UCSB Natural History Collections are an active hub on campus for biodiversity research and education.

After Vernon’s passing in 1995, and in recognition of his great contribution to the field, Vernon’s longtime associate Dr. Jennifer Thorsch facilitated the merging of Museum of Systematics and the campus’ ecological restoration program (founded by Wayne Ferren) in 2005.  In acknowledgement of his father’s great belief in the outdoor classroom, Bill is very proud of CCBER’s vital role in the restoration and maintenance of our beautiful campus by the sea. While it was Dr. Thorsch that proposed the name The Cheadle Center for Biodiversity and Ecological Restoration (CCBER), it was Bill that suggested today’s full name of The Vernon and Mary Cheadle Center for Biodiversity and Ecological Restoration in recognition of the joint role his parents played during Vernon’s time as Chancellor.

The Cheadle family’s generosity includes significant donations that will forever have great impacts on campus. Throughout their lifetime, Vernon and Mary donated to several areas at UCSB including to student aid, the Library and CCBER. Bill and his wife, also named Mary, continue in that legacy with great generosity of time, spirit and financial support. They currently serve as Chairs of CCBER’s Director’s Council, which includes their son Joey Cheadle, and in addition to many other contributions to CCBER and campus over the last 15 years, they have made a leadership gift commitment to CCBER. In 2014, Bill and Mary Cheadle pledged $1.6M to CCBER with the goal of permanently honoring their family legacy.

It is with much gratitude that we recognize Bill Cheadle for his leadership and great contributions to the Vernon and Mary Cheadle Center for Biodiversity and Ecological Restoration Cheadle.