Busy Bees and Bee-searchers at NCOS and Beyond

If you've recently been out on the NCOS Marsh Trail or just about any other open space, you likely heard buzzing and saw different insects than usual flying about and visiting the plethora of flowers currently in bloom. Most of the buzzing is from bees, of course, who are busy collecting nectar and pollen for their nests, and, in exchange, carrying out a pollination service that is essential for the reproduction of many species of flowering plants. Research on the types of bees and the plants they help pollinate has become increasingly important, particularly since native bee populations are declining due to multiple impacts such as the loss of habitat and pesticides.

CCBER is contributing to this research through the Coastal Fund-supported UCSBees program, which involves students and staff conducting studies on the bees and the plants they pollinate at different sites on campus and elsewhere in the region. The projects are led by the CCBER Director, Dr. Katja Seltmann, who is an entomologist studying bees, wasps and ants (Hymenoptera). These sites vary broadly in terms of management and type of vegetation, from developed and heavily landscaped sites dominated by exotic species to sites currently undergoing restoration (such as NCOS) and more established natural sites (such as Coal Oil Point Nature Reserve). In this post, we're highlighting three of the UCSBees student projects and some of the different bees that can be seen at NCOS and other sites in the region. 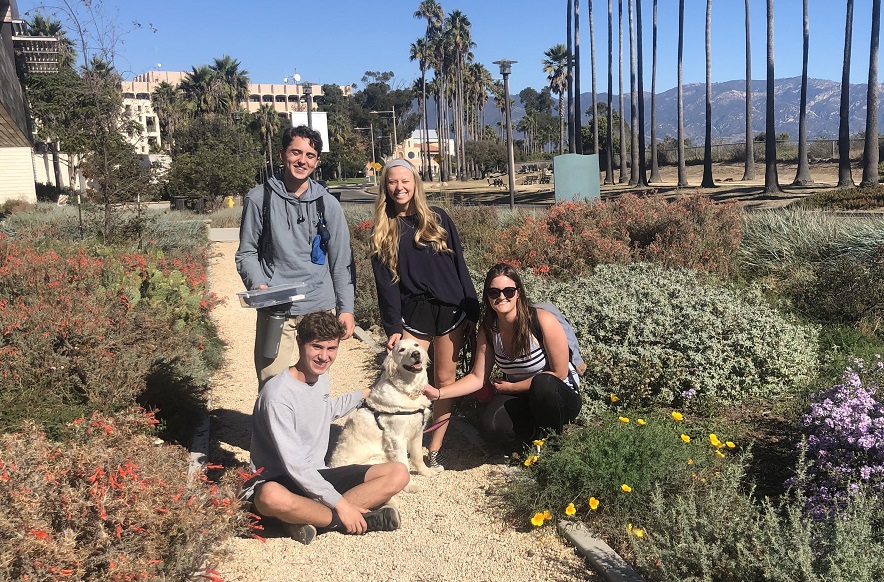 Photo of UCSB student members (and canine assistant) of the UCSBees project team.

One of the first projects initiated by the UCSBees team in October of 2018 is the monthly monitoring of bee diversity at up to eight sites, including NCOS, the Campus Lagoon and also the Carpinteria Salt Marsh, Santa Cruz Island and restoration sites on the Santa Clara river in Ventura County. Charlie Thrift, a second year Biology major, had been conducting the monthly monitoring at NCOS, which involves placing grids of yellow, blue and white bowls filled with soapy water at various locations around the site. Over the course of the day, the brightly colored bowls attract flying insects, some of which land in the soapy water. At the end of the day, the bowls are collected and the insects are preserved to be identified and counted later. This monitoring can help detect the presence of certain bee species that indicate how the restoration project may be performing in terms of supporting local native biodiversity. Charlie notes that "since we also analyze the bees next door from the more established Coal Oil Point Reserve, we have a good idea of which bees should be seen at a fully restored NCOS. While in-person collection work and bee identification have ceased during the current stay-at-home order, we have been able to spend plenty of time remotely analyzing over a year's worth of data." You can check out flower and habitat observations from this and other projects at the UCSBees iNaturalist page and our Bee Checklist. 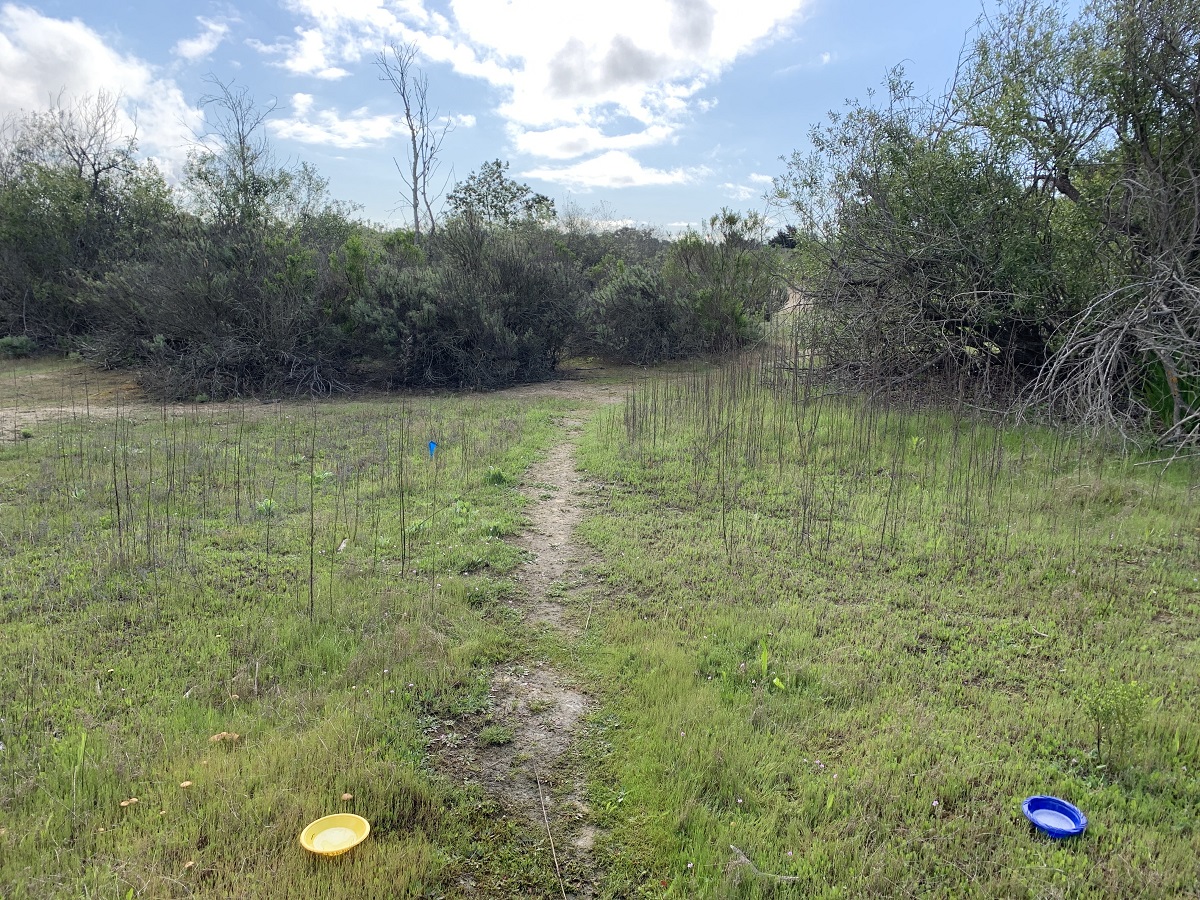 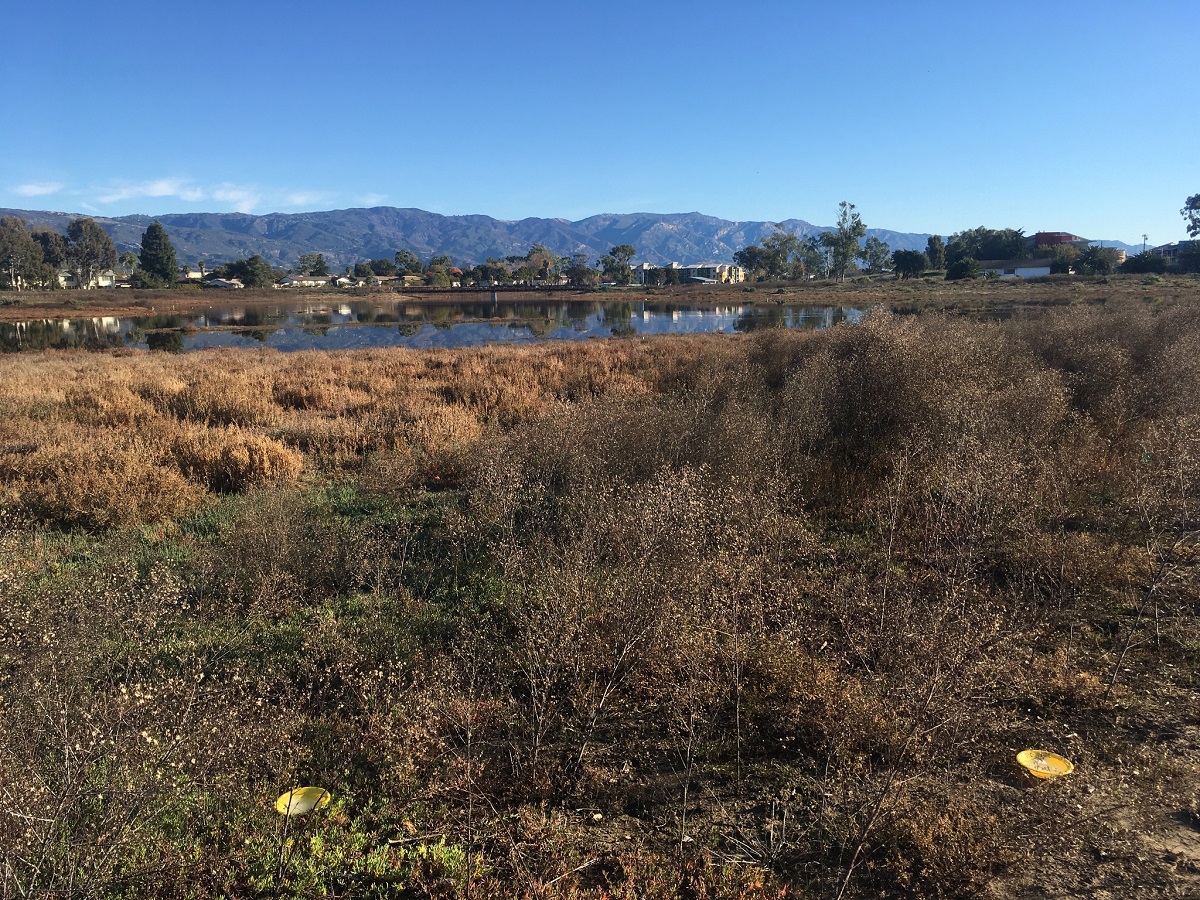 Photographs of two of the monthly bee monitoring sites at North Campus Open Space, with yellow and blue bowls filled with soapy water.

Taylor Curtis, a fourth year double major in Biology and Environmental Studies has been working on a project called "Bees and Phylogenetic Trees". As Taylor explains, this involves a team of students "monitoring bee populations and their plants of choice in the world of university managed landscapes. Through hand collections at four transect sites each week throughout spring, volunteers have collected data that is telling us more about what types of bees are found on certain flowers. The plant species at each transect site are given a score based on their phylogenetic diversity, a metric used to approximate a population’s ability to adapt to environmental changes. The aim of this analysis is to advance our understanding of the relationships between plant community diversity and the bee communities they support. The students involved in this project have gained first hand experience collecting in the field as well as learning how to curate insect specimens for CCBER's natural history collections and database. This project is ongoing with a goal of being completed by the Fall of 2021." 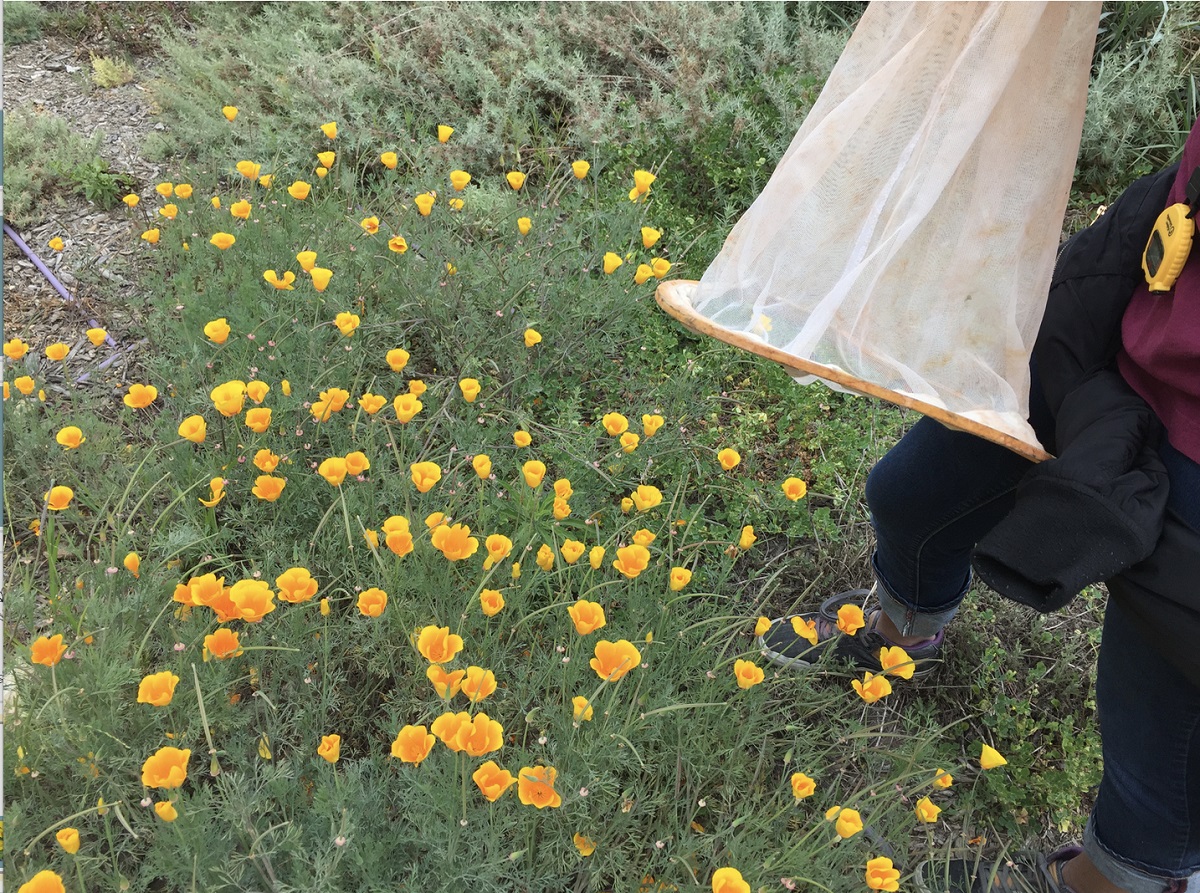 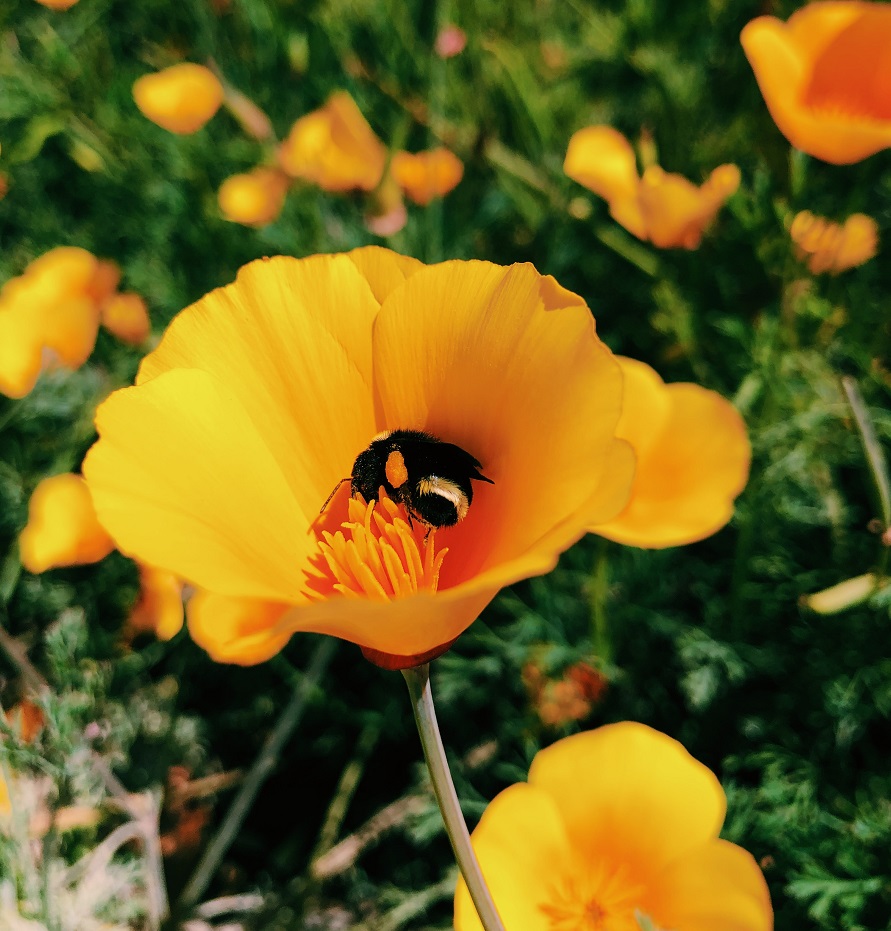 LEFT: A student uses a sweep net to collect insects on California poppies at UCSB.    RIGHT: A bumblebee visiting a poppy flower.

The Proof is in the Pollen - Michelle Lee

Ecology, Evolution and Marine Biology graduate student in Dr. Hillary Young's lab, Michelle Lee, is leading a new study that she explains is "utilizing molecular techniques to better quantify the impacts of campus restoration on bee health, specifically bee pollen diet. This project uses DNA metabarcoding to identify all species of plants visited by bee individuals collected across the UCSB campus. This will tell us exactly what plants are visited by bee species, particularly species of conservation concern. The results can then offer insight and recommendations to CCBER and other agenices on restoration plantings that support native bees." 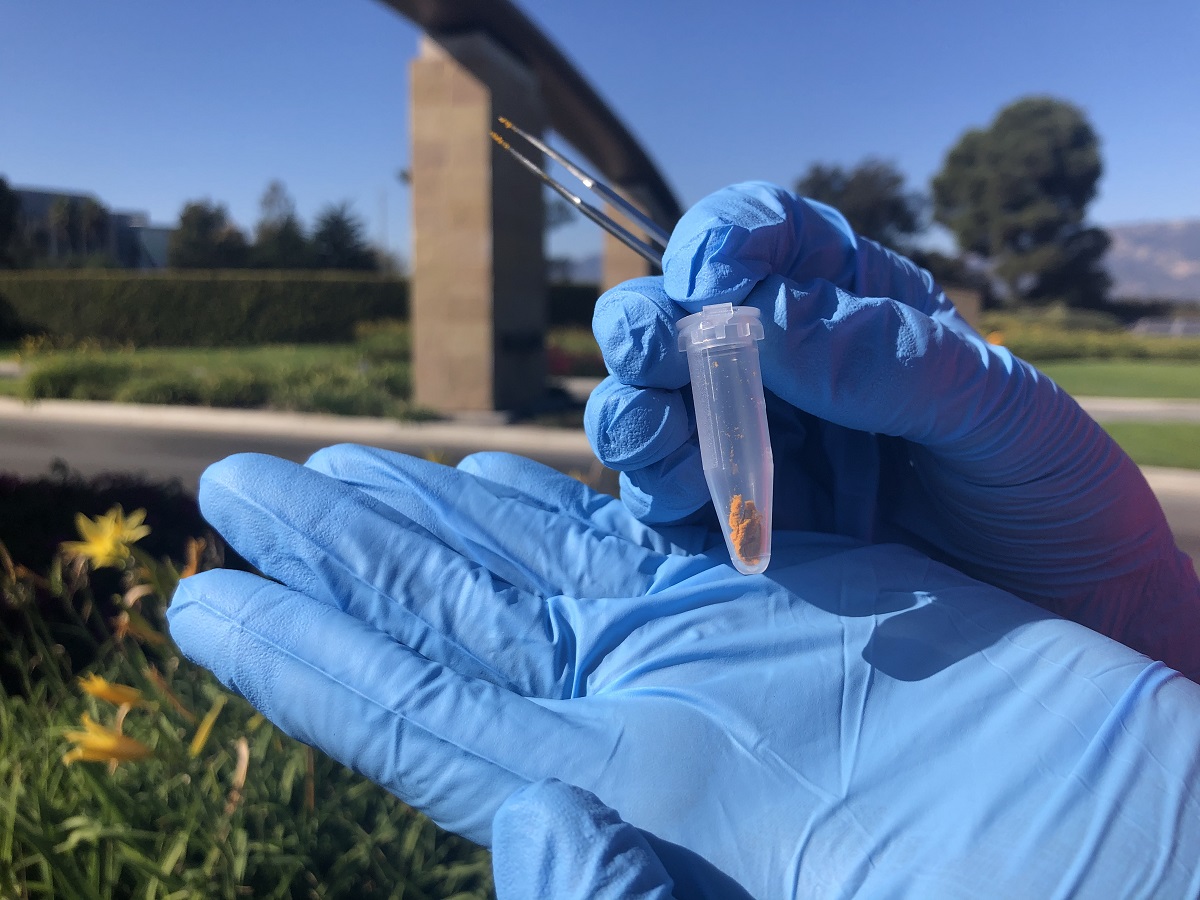 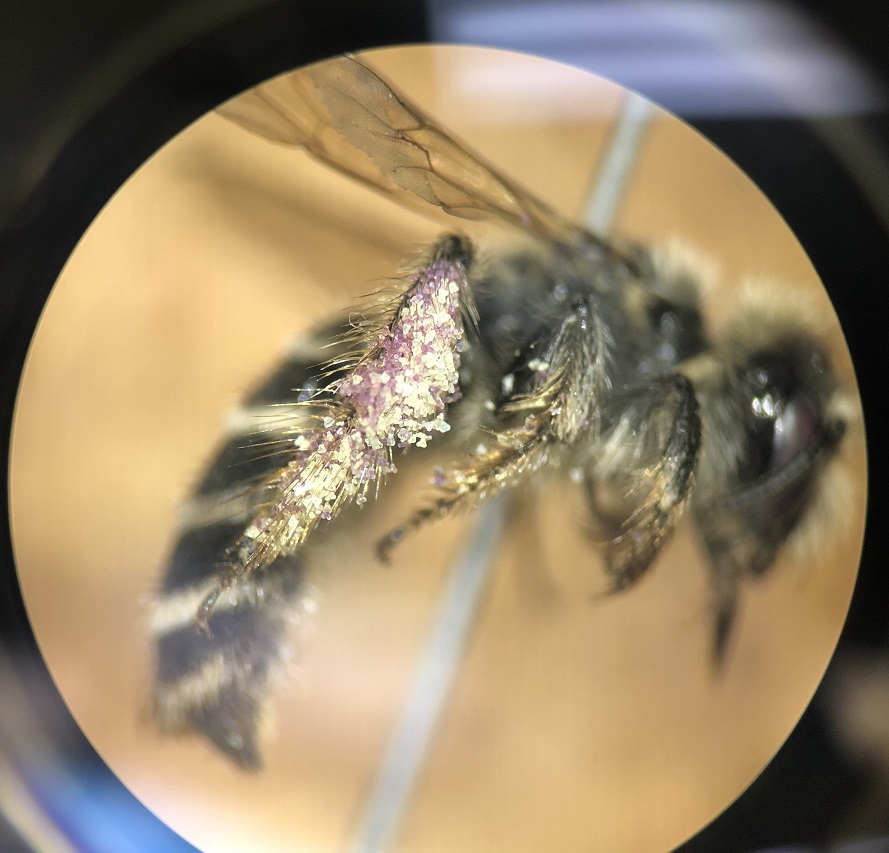 LEFT: UCSB grad student Michelle Lee displays pollen collected from a Daylily on campus.  RIGHT: An image of a collected bee of the Hesperapis genus - note the two types of pollen on the hind leg, one is white-yellow in color and the other is a light purple.

Some Common and Rare Bees at NCOS

To date, there have been 30 species of bee seen or collected at NCOS and we expect this number to increase as the project continues. The identification of some species has not yet been completely determined and they are only determined to a species group or type. This is because they are very small and similar (cryptic) bees, and not all bees in this group are easily identifiable - some may be new to science! Note that many of these species were recorded during a survey that occurred in 2016, prior to the restoration project. However, several species that have been recorded at NCOS since the start of the restoration project were not observed in the 2016 survey. In fact, just last week we recorded an endangered bee not seen at NCOS before (more details below). A list of all of the species from the four taxonomic families of bees seen at NCOS (Apidae, Colletidae, Halictidae, and Megachilidae), along with collection photos and other information, is included in CCBER's checklist of the terrestrial arthropod species of NCOS.

The most familiar pollinator is, of course, the honey bee (Apis mellifera), which was introduced from Europe and is heavily cultivated by beekeepers for crop pollination and honey production. Other bees commonly seen out on NCOS are bumblebees, which are in the same family as the honey bee, Apidae. Bumblebee identification can be tricky - if in doubt, take a photo. Two of the most common bumblebee species whose identification can often be confused are the yellow-faced bumblebee (Bombus vosnesenskii) and the black-tailed bumblebee (Bombus melanopygus). While they both have yellow-haired faces, they can be distinguished by the number and position of the yellow bands on the black-haired body. Ironically, the black-tailed bumblebee has more yellow hair, especially on its midsection. 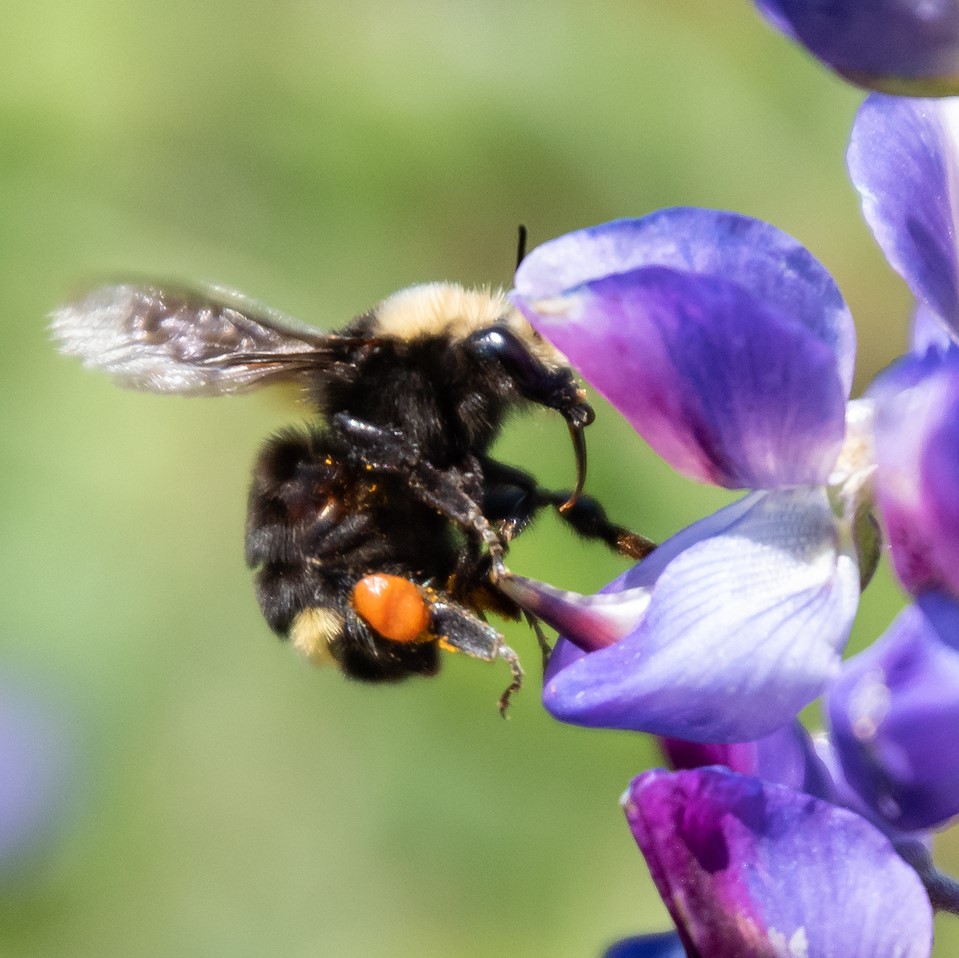 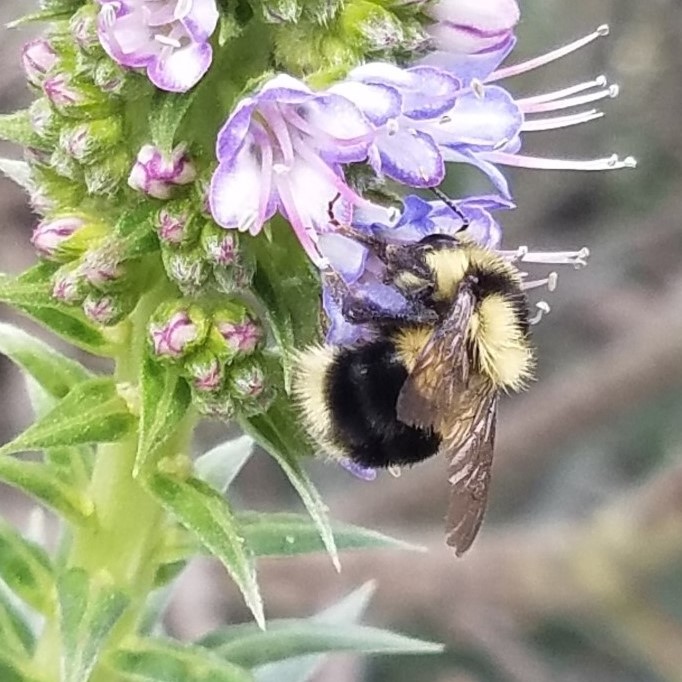 On April 30th, CCBER staff member, Carlo Calderon, spotted and photographed a queen Crotch's bumblebee (Bombus crotchii, named after entomologist George Robert Crotch) at NCOS! This species is listed as endangered on the International Union for Conservation of Nature's Red List. Females of these bees are large, have short black-haired faces, and yellow bands on the "shoulders" and "tail". The yellow band on the tail is usually broader and more centered than in other bumblebees. They have been spotted in past years on and around the UCSB campus, but not on NCOS until now, perhaps due to lack of recognition. 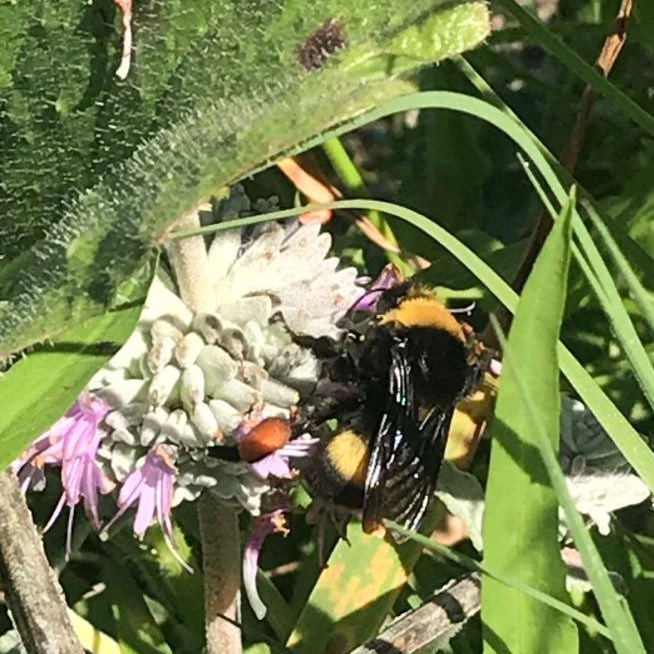 LEFT: this photo of an endangered Crotch's bumblebee (Bombus crotchii) at NCOS was taken by Carlo Calderon on April 30th and includes a good view of the broad yellow band on the "tail" and a little yellow on the head. RIGHT: this specimen was a female collected in 2017 from Ellwood Mesa (west of NCOS) and deposited in CCBER's natural history collections. This specimen has some morphological variation with additional yellow banding.

Another common, charismatic native bee is the ultra-green sweat bee (Agapostemon texanus). As the name suggests, they are a vibrant metallic green. The color of some southern California subspecies can be in the dazzling violet-blue range. Females of this species are entirely metallic green, while males have yellow legs and "tails" with black markings.

A long-horned bee (Melissodes tepida ssp. timberlakei), has also been collected at NCOS. These bees are known to visit the federally endangered plant, Salt Marsh Bird's Beak (Chloropryon maritimum ssp. maritimum). The US Fish and Wildlife Service has been assessing the potential suitability of NCOS and other sites for outplantings of this endangered plant, and the presence of its specialized pollinator could boost the chance of successful establishment. 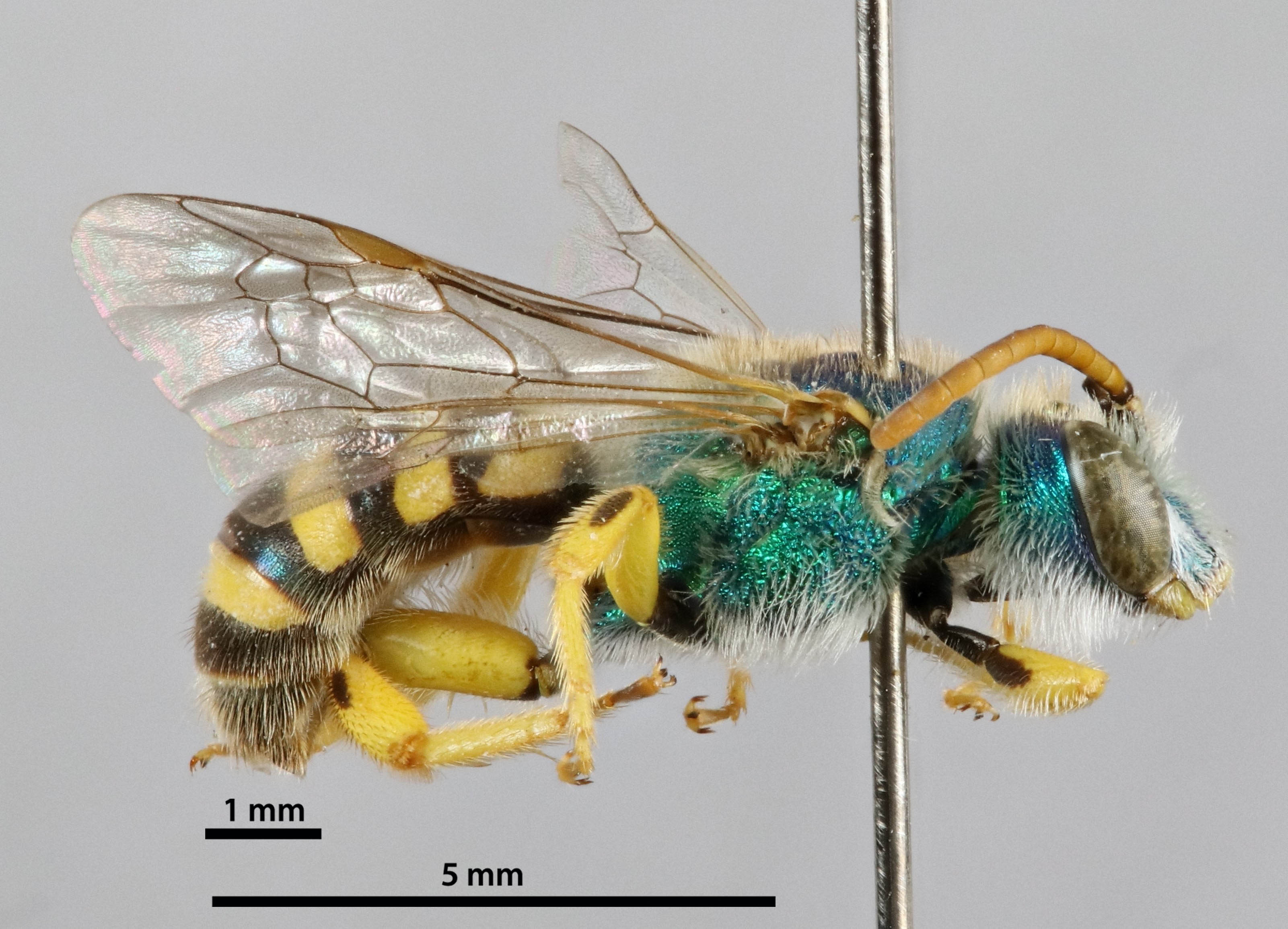 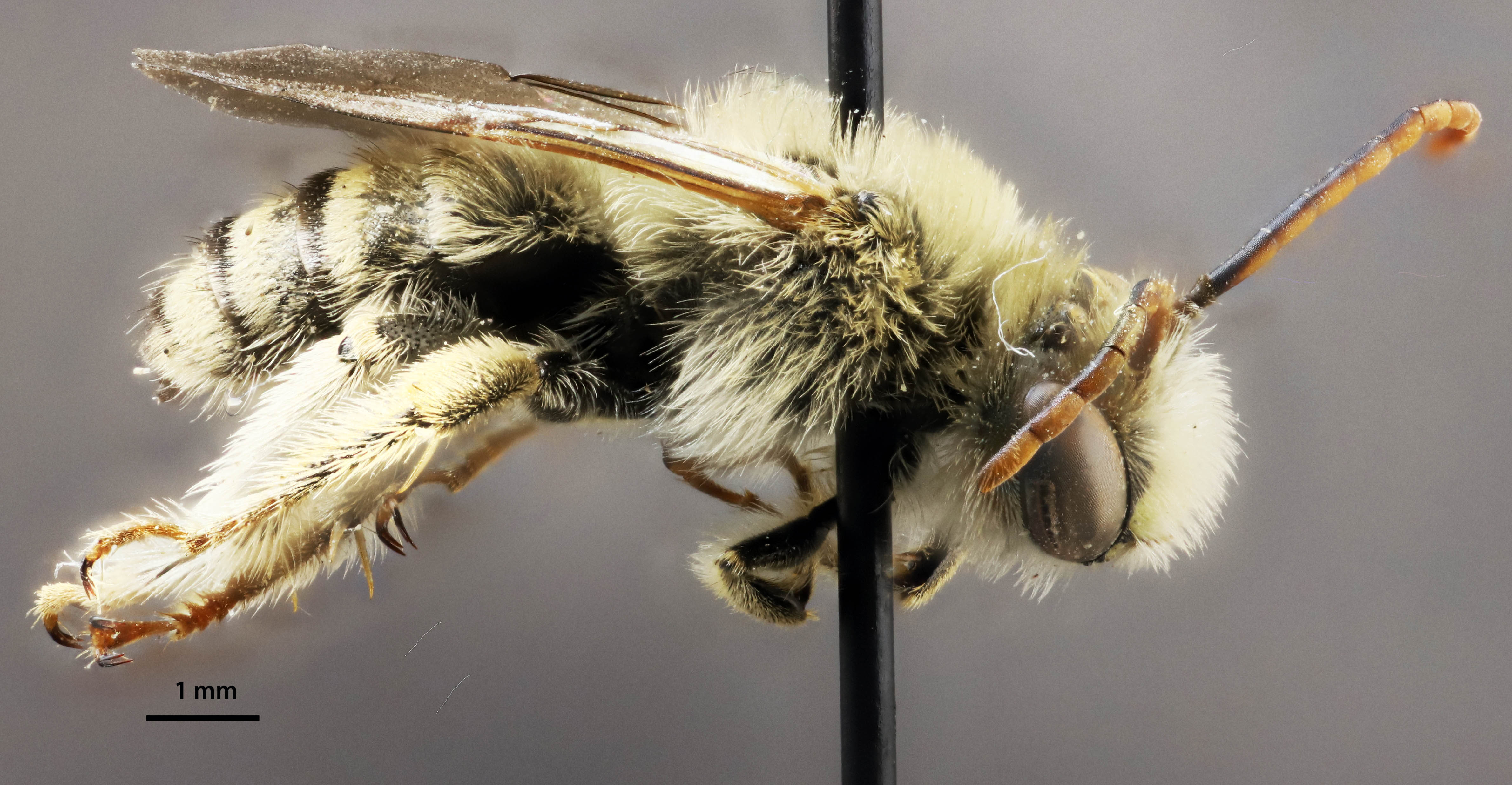 Some native bees can get pretty small, so if you stop to smell the roses, be sure to look inside to where the pollen of the flower is kept.

If you happen to spot native bees while you're out and about, and are able to capture a photo, you can add your observation to iNaturalist and contribute to a growing citizen science project. These observations will help ongoing and future research, and high-quality observations will be indexed and curated in CCBER's natural history collections database.