Fall is here, and that means it's the time of year when we review and tally up our monitoring data from the last 12 months, starting with the monthly bird surveys. As we did with the first year of bird surveys, we are continuing to compare and contrast North Campus Open Space (NCOS) with its neighbor, Coal Oil Point Reserve (COPR) - an important reference site for the majority of bird species that we expect to see at NCOS as the restoration progresses.

The 2nd year of bird surveys at NCOS saw a total of 6256 fully identified individuals counted from 128 species (a few additional birds that were not completely identified to species are not included in the total). That's an overall increase in abundance and diversity from the 1st year by more than 1400 individuals and 24 species. Some of the additional species observed in year two include 4 Raptors (most notable were the Burrowing Owls), Belted Kingfisher, 4 Shorebirds, 4 Waterfowl and 5 Insect eaters amongst a few others. Similar to the 1st year of surveys, the group with the greatest abundance and diversity observed were Insectivores, accounting for 2068 individuals from 40 species. While this group includes several different types of mainly terrestrial and aerial insect eaters such as Blackbirds, Flycatchers, some Sparrows, Swallows, Woodpeckers and Wrens, 3 species accounted for half of the total individuals observed: Cliff Swallow, White-crowned Sparrow and Song Sparrow. A group that saw a notable increase in abundance and diversity were Waterfowl (including Grebes and Rails), where the number of individuals observed was more than double the total in year 1. Most of this increase was in the number of American Coot seen, which went from 6 in the first year to 404 in year 2! Click here for a complete list of the species observed in each group.

Pie chart of the proportion of total observations of birds by group or guild with the number of species in parentheses recorded during monthly bird surveys of North Campus Open Space from September 2018 through August 2019.

COPR also had an increase in abundance and diversity from the previous year, with a total of 8134 fully identified individuals observed from 141 species. However, when comparing with NCOS we excluded the beach habitat that is part of the COPR surveys since this type of habitat doesn't exist at NCOS, and this makes the two sites more balanced in comparison. Excluding the beach, there was still an increase in diversity by 6 species (135 vs. 129 in the previous year), but a slight decrease in the total number observed (3824 vs. 3938 in the previous year). The groups where counts were less than in the previous year were Waterfowl and Gulls & Terns, while counts of Insectivores and Seed Eaters increased. Shorebirds continue to be the most abundant group at COPR, while, like NCOS, Insectivores is the most diverse. Click here for a complete list of the species observed in each group at COPR (excluding the beach). 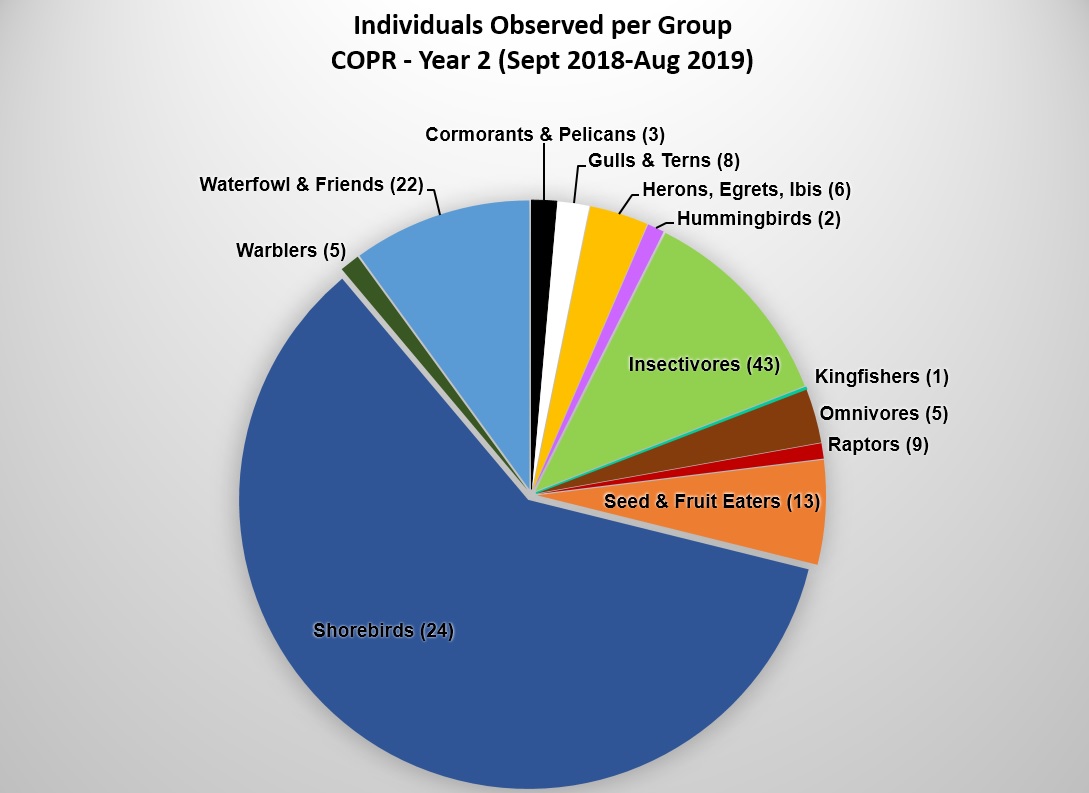 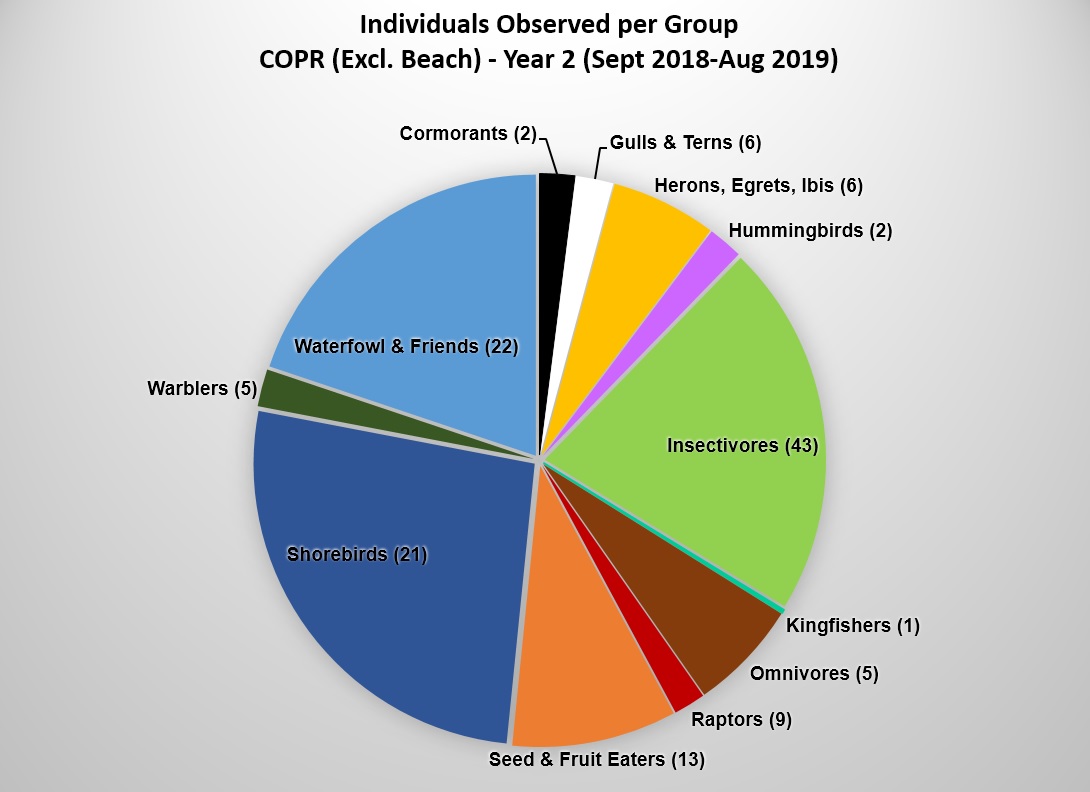 Pie charts of the proportion of total observations of birds by group or guild with the number of species in parentheses recorded during monthly bird surveys of Coal Oil Point Reserve from September 2018 through August 2019. The top chart includes counts from all habitats while the bottom chart excludes counts from the beach habitat.

Excluding the beach, COPR and NCOS are generally similar in overall diversity and abundance. COPR tends to have a greater abundance of Shorebirds, Herons/Egrets and Cormorants, while NCOS currently tends to have more Insectivores and Seed/Fruit eaters. 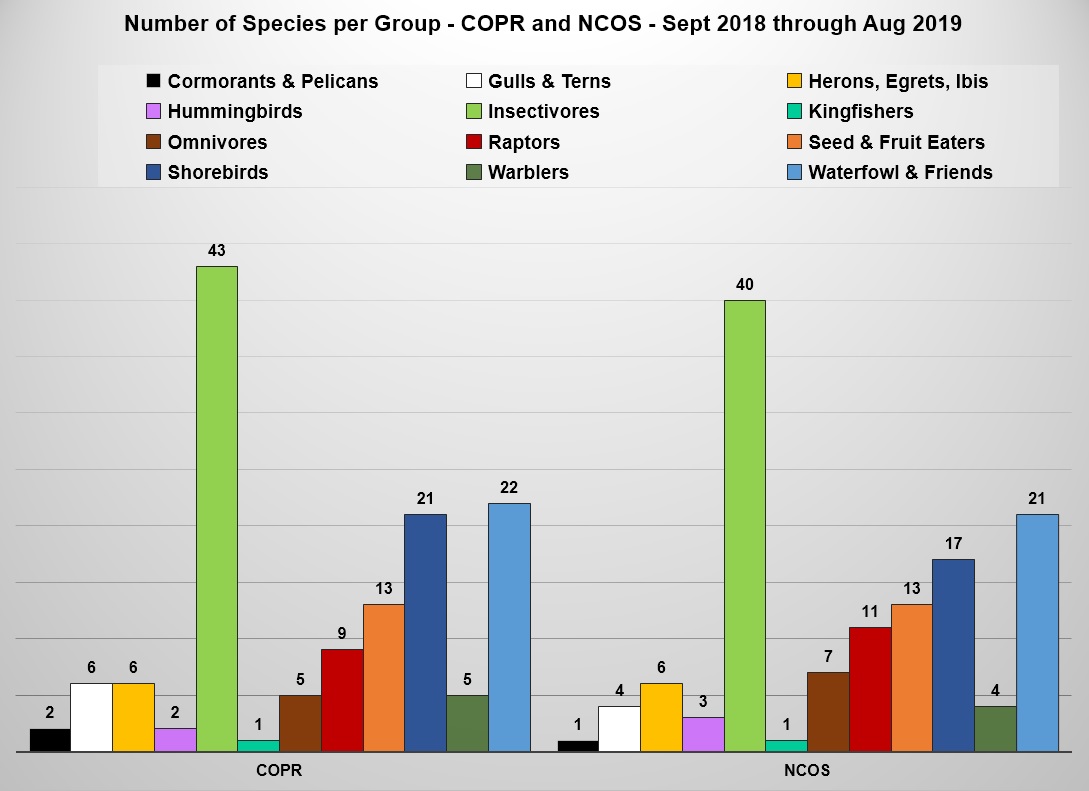 There are indeed more species occuring at NCOS and COPR than what we've recorded in our monthly surveys. For example, some notable species seen at NCOS that haven't yet been observed during a survey include Peregrine Falcon, Yellow-crowned Night-Heron, and Lesser Nighthawk. eBird contains more comprehensive lists of species seen at NCOS and COPR. We are continuing to map the locations of birds on the monthly surveys, and you can view maps and details of each survey on eBird by searching for checklists submitted by Lisa Stratton for the UCSB North Campus Open Space. For example, check out the list for the August 2019 survey here. In addition, you can also view interactive maps of the monthly surveys by searching for "NCOS Bird Survey" on arcgis.com, such as this example.

Coming up later this fall, we are excited to be participating in our first Pacific Flyway Shorebird Survey! This is an annual survey of shorebirds conducted internationally between mid-November to mid-December and is coordinated by Point Blue Conservation Science. We're collaborating with the team at COPR to participate in the survey at both NCOS and COPR on the same day. We look forward to the results and to seeing what next year's bird survey roundup will reveal - stay tuned!