East Depression is a 1 acre coastal dune site that connects UCSB's Campus Point and Lagoon Island. It is bordered on the north by the Campus Lagoon and on the south by the Santa Barbara Channel. The site consists of several distinct habitats including salt marsh, coastal scrub, coastal foredune, dune swale, coastal strand, and sandy intertidal. 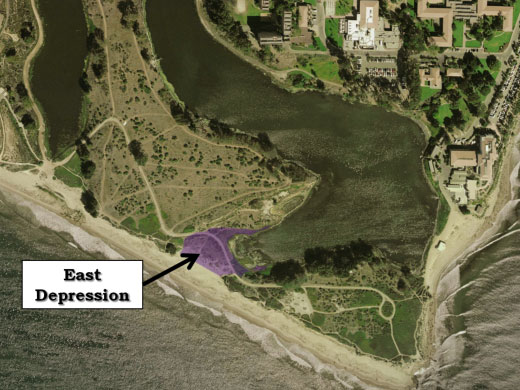 In 2000 the dune areas of the site were covered almost entirely by non-native invasive iceplant (Carpobrotus edulis). The spread of this thick mat-forming iceplant on the site had impaired the natural dune forming and shaping processes that are characteristic of coastal dune habitats by stabilizing the slope and impeding sand transport. Thus, the dunes at East Depression were artificially steep and stable compared to undisturbed coastal dunes. Restoration of this area was conducted in 2000 and 2001 as a year long Environmental Studies course. Manual removal and 'solarization' of iceplant began in the fall of 2000 and continued into the winter and spring of 2001. Solarization is a process in which black plastic placed over the iceplant to trap in heat and block sunlight. The iceplant was replaced with native plants that were grown at the CCBER Native Plant Nursery from seeds collected from local reference sites. 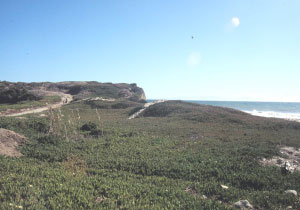 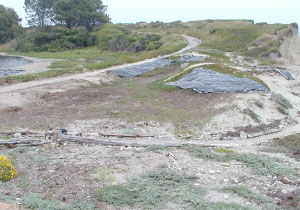 Like the West Depression site, this site has been shaped by two large disturbance events. In December of 2005 and again in January of 2008 extremely high tides and big waves brought in by large storms flooded the low elevation areas of the site bringing in large amounts of driftwood and seaweed wrack. After the 2005 event much of the debris was piled into tarps and dragged offsite, however; after the second storm in 2008 it was decided that these periodic disturbances are a part of the natural cycle of dune systems and the woody debris was left in place. The influx of salt water and debris caused a change in the species composition of the affected areas. Low areas that were once covered with several dune species including California poppies (Eschscholzia californica) and bush lupine (Lupinus arboreus) became dominated by salt grass (Distichlis spicata). However, in 2009, diversity appears to be beginning to increase. 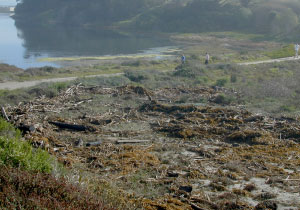 Figure 4: Large waves from a storm in 2006 covered the low areas of the site with seaweed and driftwood. 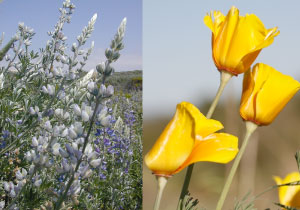 Figure 5: Lupine and California poppies once covered the low areas of the site but were replaced by salt grass due to disturbance caused by the large storms of 2006 and 2008.

In 2007, iceplant and non-native grasses were removed from the eastern and southern edges of the lagoon at the East Depression site. The iceplant in this area was controlled by a method called solarization in which sheets of black plastic are placed on top of the iceplant for several months during the summer and fall. The black plastic traps the heat and moisture and blocks sunlight, causing the plants to die. We discovered that the solarization process killed the iceplant but allowed the native salt marsh species being suppressed by the iceplant, Jaumea carnosa and Frankenia salina, to persist and eventually dominate. These areas were also planted with native salt marsh, coastal scrub, and dune species depending on the elevation and soil salinity. 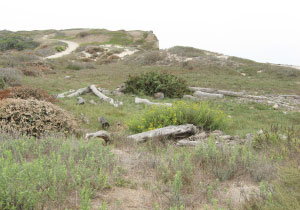 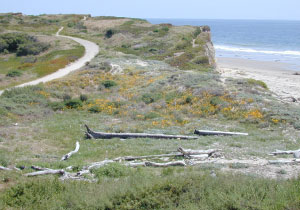